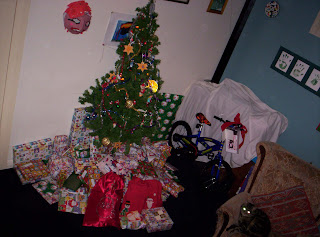 I hope you all had a great break and got some riding in to stave off the effects of Christmas over-consumption - I certainly did my best. Like most of you I'm back at work now though, and slowly easing my way back into the routine. I am looking forward to a few choice bike repair/restore projects coming up, as well as to some upcoming events such as the Wellington round of the MTB National Series this weekend. I'm looking forward to catching up with Tim Wilding, who makes his first foray into this years series, as well as just soaking in the atmosphere of an elite bike race on Mt Victoria.

Coming up for me as well is the start of the 2009 Jazz Apples programme - I'm going to be lucky to be again working with them from mid-February until early March on a training camp, the Women's Tour of Wellington and the new UCI race around Miramar Peninsular. The Team roster is very strong with returning riders Susy Pryde (NZL), Ruth Corset (AUS), Lauren Ellis (NZL) and Malindi Maclean (NZL), along with talented newcomers Dotsie Bausch (USA) and Steph Roorda (CAN). The line up is completed by the return of dual MTB and road international, Rosara Joseph (NZL) for a Team that will be able to compete in all areas. Choice! I'm really looking forward to my annual foray into the glamorous world of women's pro racing...

Lauren Ellis wins in the USA last year - more of this please! 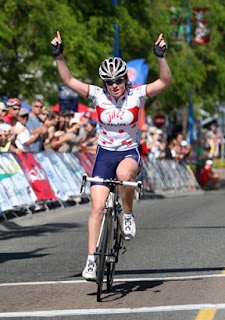 Anyway, after being slightly burned out by the end of last year (bet you couldn't tell!) I took full advantage of the days before Christmas to de-stress with some grouse rides. The first couple were lovely ambles around Makara Peak, but then things got weird - my friend Alex and I decided to ride UP the Tip Track wtf?! A ride that's not usually high on my list of fun things to do, this trail climbs about 400 vertical metres quite rapidly. The legend that is Simon Kennett holds the known record with just over 19 1/2 minutes, with anything around 30 minutes regarded as a good solid time. Al and I managed it in just over 40 minutes, though my timing wasn't exact as I dropped my calendar at the top...

I'm not sure if I'm starting to get a wee glimpse of something approximating fitness, or if the superb traction afforded by my Commençal was helping, but I was riding bits I have always struggled with in the past. Not riding fast, you understand, but riding. Whatever the outcome, the effort must have been worthy as I threw up twice at the summit, though I managed to keep the evidence out of these grainy cellphone pix. 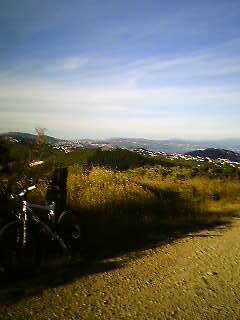 The top of the Tipper, known to Cycle Services Faithful as "CU". 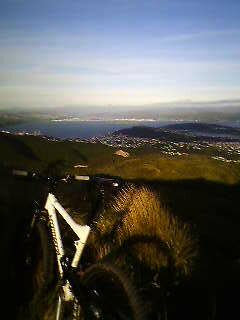 After cleaning myself up and recovering (quicker than I thought!) we rode past the castle atop Hawkins and it's rabid guard dogs, then down the road to Carparts where much hilarious shralving ensued as the light began to fade from the evening sky. 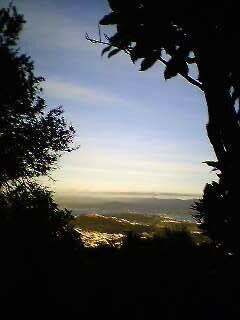 Then we rode the Rollercoaster at warp speed... 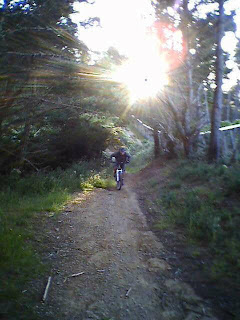 Before hitting Denton Park trail down to Holloway Road then a cruise through town to home.

This pic I took as I climbed out of a bush after an unscheduled diversion into some bushes... 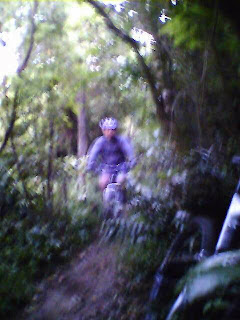 Before I was absorbed into the hideous melee that is Christmas shopping I also found some time to head out on a road ride around the Bays with my good buddy John Randal. It's so rare that our schedules allow us to ride together, so it was much enjoyed. No pics of the ride but here's a cool one Alex Revell sent me of John getting ready for his impressive Taupo ride last year - czech that equally impressive mo! 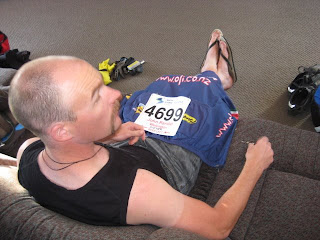 Christmas was awesome, with the usual family, feast and full-on inebriation - not to mention a redeculous amount of gifts for the kids! One of the most prized was Bodhi's new bike that Father Christmas brought for him - his face when he saw it will go into my most cherished memories vault. He already had a bike of course, but it was a too-small one of Harry's cast-offs - this is his first New Bike, complete with the dinosaur stickers he had requested of Santa.

Once we had tidied up the debris on Boxing Day it was a given that we would take Bo for a blat on his new rig. Father Christmas had deliberately left off the training wheels, so Bo was going to be forced to deal with two-wheeled action for the first time. We loaded his bike and his brothers BMXs onto the back of my wagon (along with various kites and balls, etc., etc...) and traipsed up to Karori BMX track.

Bo initially made a bit of a fuss as he wobbled along with my hand on his back, but suddenly he just got a determined look on his face and said, "I'm ready!" then he was off! 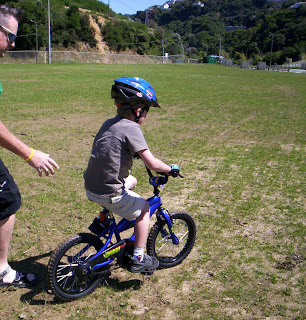 The first wobbly attempts gave way to confident riding in no time. 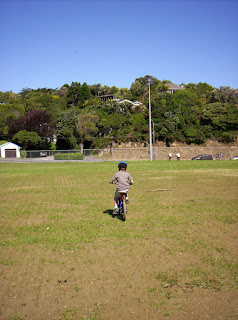 A proud and elated Bodhi lets out a victory roar! 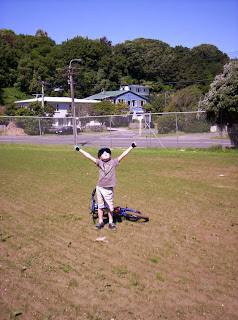 After what must have been a good four minutes of hard riding, Bo was keen for a rest so we wandered over to watch his big bros do their thing. The BMXs don't often get dragged out by these two died in the wool MTBers, and it's even rarer that we make it up to actually ride the track, so the boys were going off! 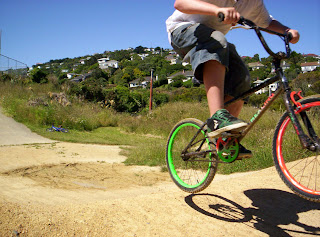 Kester rolls a jump (he did grab air too, just no pic!) 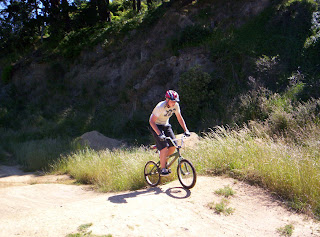 Because it's hard for us all to go on a proper ride together, given our varied cycling abilities, we often walk together. As regular readers will know, I have been loving what I used to call the Cemetery Trail that heads off Skyline and ends up in Karori Cemetery. I now believe it to be called Pilot Track (though I'm open to correction on that!) and after raving to the family about it for weeks we decided we would walk it on yet another glorious day. We made it nearly all the way up to Skyline before Bo hit the wall and demanded a shoulder ride... 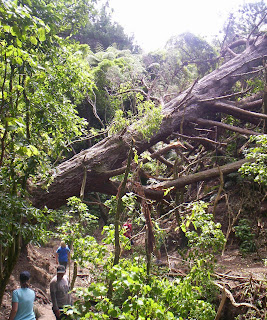 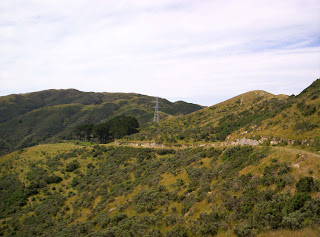 On New Years Day the family headed up to the family bach at Te Horo for a few days away from computers, TVs and phones. We had a great time doing lots of swimming, backyard cricket and rugby, cards, Monopoly and Cluedo, as well as some of the most fun bike riding I've done in ages. Just the ticket.

Mine, Jacq's and Bodhi's bikes at the bach. 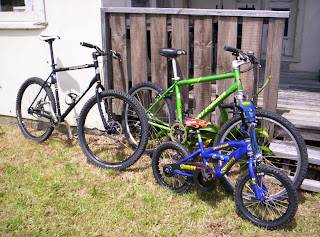 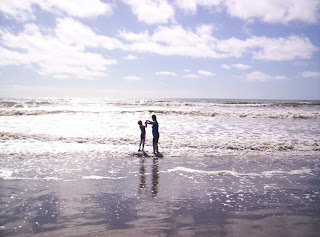 My beautiful wife Jacq astounded me recently by announcing that was going into training to do a 40km leg of Round the Lake Taupo race this year, so this was also something of an impromptu training camp as she dusted off her cycling togs and got some saddle time for the first time since Bo was born. Jacq never competed but was a keen cyclist when I met her, so it's neat to see her getting her mojo back.

Jacq wondering if saddles are meant to be quite so hurty. 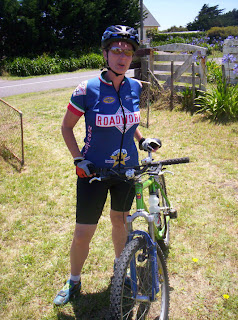 While Jacq was putting in the big miles... 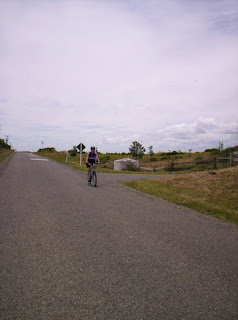 ...Bodhi and I were putting in our own. 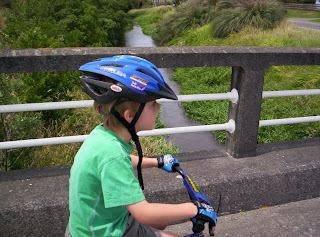 The beauty of the country is that the boys can safely ride on the road, although the lack of helmets was not part of the plan. 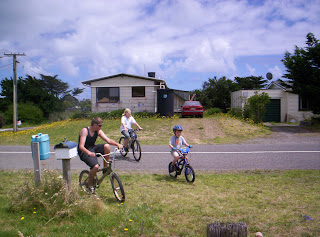 While we were away Roadworks riders all over the country - well, Wellington mainly - were preparing in their own way for the year ahead. Here is my latest road race team member Joel Healy with John Randal in the middle of inflicting all kinds of pain on each other. Let's hope they turn their sado-masochistic attentions to the other members of the peloton when the flag drops! 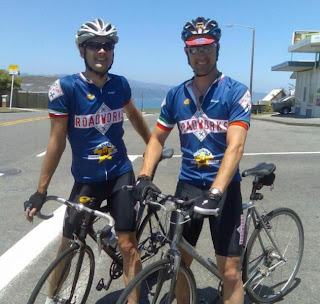 Lastly, to appease all of you who aren't as enamoured of my family photos as I am, I'll finish up with a proper bike shot to set the tone for the rest of the year. Late last year I built some wheels for my friend and 2006 NZ MTB team compadre Pete to go on this wicked Eddy Merckx... 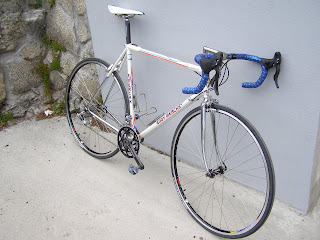 Back very soon with more of this sort of thing and more wrenching tales...

Cheers for reading, Oli
Posted by Oli at 9:07 PM

Oli, what a lovely family you have. I love the festive shot of the tree (& am insanely jealous of the beach shots).

Thanks, SMB! I'm kind of partial to them myself...Cheers for reading, Oli