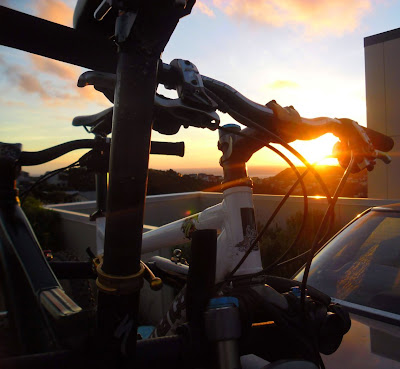 The riding has been sporadic, but my cunning new tactic of only blogging my rides every couple of months pays dividends by making it look like I'm out all the time. The clue is the good weather in all the rides - with Wellington's quota of only one good day for every three to four rides (assuming a ride usually only occurs once a week) it's easy to see that I'm making the most of summer...

I had a lovely 5km ride around and around the Hataitai Velodrome with Bodhi one Saturday afternoon. 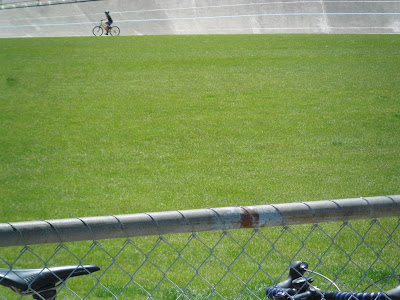 After a nasty near-crash pedal strike early on, Bo understandably shied away from the banking - huge platform pedals, a low b/b and not really that much momentum made the vertiginous slopes très difficile. He attacked lap after lap with gusto, nonetheless... ...including a couple of timed laps... 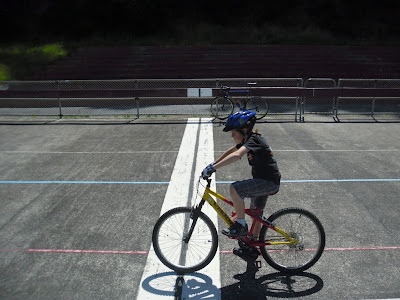 ...and a match sprint against his Old Man in which he gave his all, emerging victorious.

We spent a bit of time post-race just chilling out, reflecting on our results and going over a few tactics - a bit of track craft now could stand me in good stead one day. 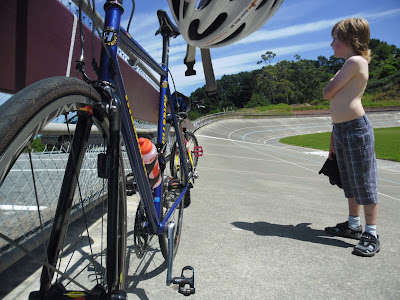 Nine isn't quite the milestone that eighteen is, so Bodhi doesn't get his own blog post, but last week was his birthday so here's as good a place as any to mark it thus. Happy 9th Birthday, my lovely boy! x 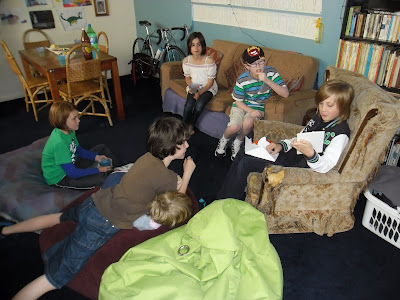 One thing that has been sorely missed from these Tales of mine in recent times have been adventures with my old mate The Commander - a combination of the usual chaos at my end and a nasty knee injury to Alex have meant it's been months and months since we last ate dirt together. The Christmas holidays were a good time to renew the gift of friendship awheel, with a ride with Nick, Steve and Wayne planned. Despite some initial text-created confusion on my part about whether we were riding Rimu or Rimu(taka Incline) and some nearly running out of gas issues, we made it out to the rendezvous point in plenty of time...well okay, half an hour late then. This technically undemanding ride was perfect for both Al and I to ease back into some riding, I foolishly thought, and for us all to ride side-by-side and socialise. Which admittedly we did, albeit somewhat briefly. We set off in mellow convoy with Al setting the early pace and Nick and I chatting to Steve on his flash new Singular Swift. Alex's knee was clearly fine now, and I was starting to suspect he'd been doing some secret training as he rapidly shot off into the distance. 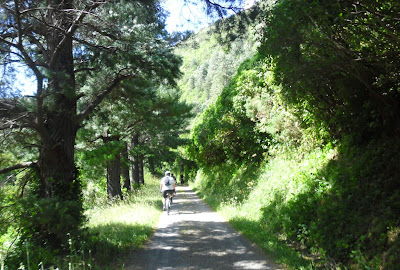 Steve and Nick cruise one of the old rail bridges as the gradient starts to gently kick in, as I begin fumbling with my camera as an excuse for lagging behind. 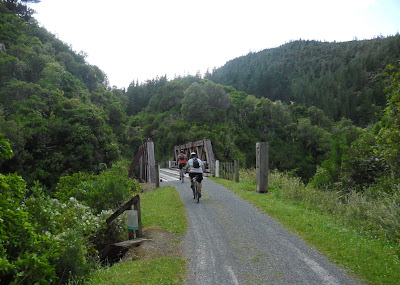 After Wayne had effortlessly bridged up to Al, Steve eventually got sick of me lollygagging about with my camera and took off in hot pursuit. Nick too saw his opportunity and dropped the Big O. 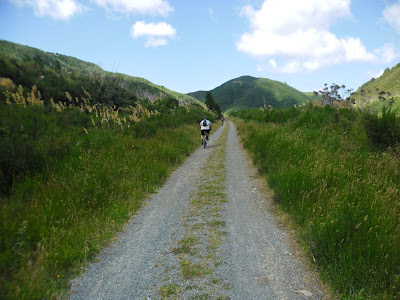 Despite my glacial pace and the gnawing feelings of abandonment I was barely dealing with, I put my best pedal forwards, got on with the job and made damn sure I found time to take a cheery self-pic. 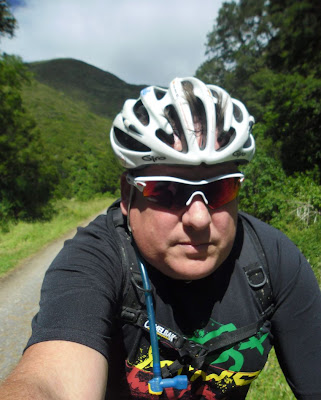 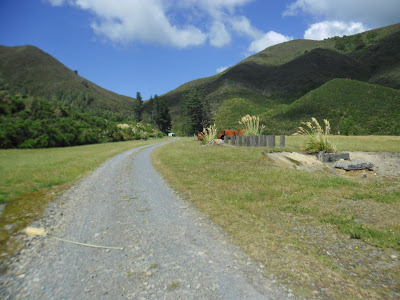 Oh well, at least I'm not as much of a has-been as these poor remnants. 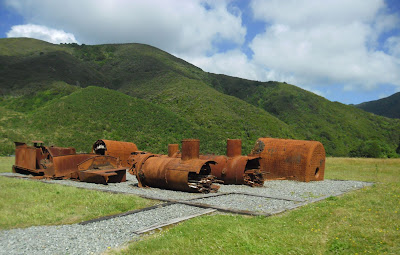 Phew! They are still there! I really need glasses... 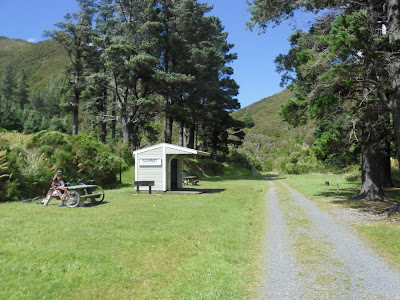 After a bit of debate (captured appositely in this picture of my bicycle) we decided that the gale-force northerlies made heading down to Siberia unwise at best, and downright dangerous at worst. The three racing sardines opted to ride the Back Road diversion on the way back to the carpark, while Nick and I simply retraced our tracks figuring we were going to be having a hard enough time punching into the NWer without adding hills into the mix. 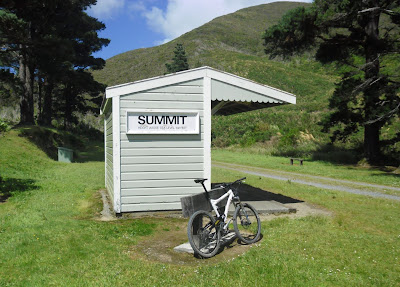 The wind, of course, wasn't as bad as we feared so we meandered down. I stopped to take a photo from a bridge. Here is a waterfall. 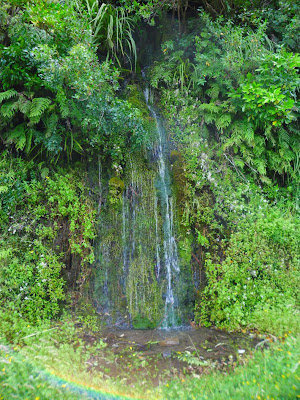 The tunnels are an iconic part of this great ride, even though we'd skipped the big one atop the summit through our wind-borne softness. 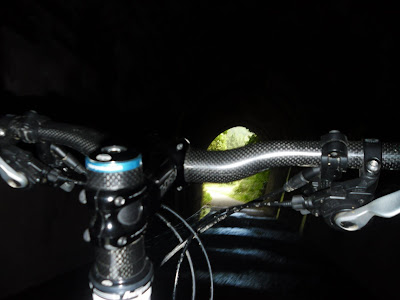 Despite my lamentable lack of verve, it was a neat afternoon. Catching up with Al and the boys was very cool, and the riding was fun.

I reconciled my less than stellar fitness by putting it down to all the Christmas excesses and a general holiday malaise, but determined I'd hit the road regularly to make inroads on getting some semblance of basic Oli-level fitness at least. I went so far as building up a new bike to give me that new toy enthusiasm (more on this another time), but sadly after only a few kilometres the 20mm less setback to usual bit me badly on the knee, making me gingerly pedal straight back home in quite some pain. Grr. So, after a suitable period of inactivity/recovery, Al once again galvanised me into action with a plan to ride out at Meridian Energy's West Wind trails one fine evening. 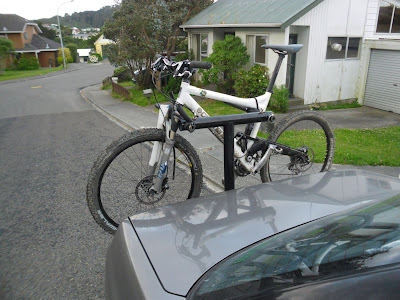 As can be clearly seen in the photo above, we didn't actually end up riding at West Wind at all. As disorganised as ever, by the time we had got our collective shit together and driven all the way out to Makara we had missed the closing of the rather stout gates by over half an hour (are you seeing a common theme here?). After a panicked and pointless text to a bemused John Randal failed to help Al and I work out if running the gauntlet of the prominently advertised security firm was worth the risk, we quickly formulated a Plan B. We drove back over the Makara Hill to the MTB Park, rapidly unloaded the car and kitted up... 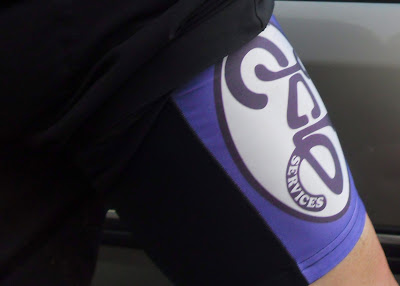 ...then rode in through the AMP Connector and up to the picnic table on Ridgeline Extention. 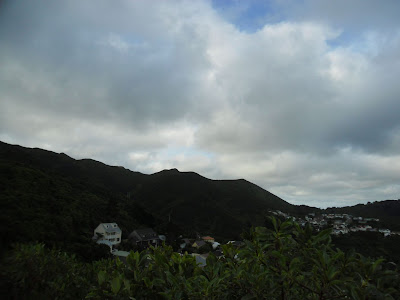 We reacquainted ourselves with our long-missed and much loved Makara Peak with a fantastic run down RE and Big Tom's Wheelie, before flowing like water down the sinuous Lazy Fern. 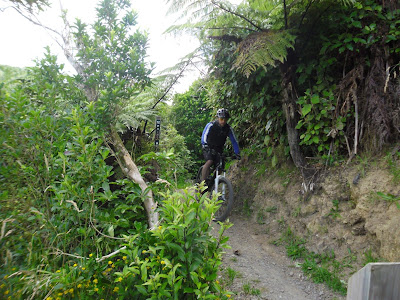 We then rode up Koru and Rimu, where I discovered my knee was still a bit tender from the road ride. I suggested to Al he get another run down the hill while I grabbed the car to meet him down in the main carpark - he got a shuttle run in, as it were. We got home in time for some Scottish food and a refreshing ale as the sun set spectacularly, sending stunning striated sunbeams of every shade shooting into the solid sky. 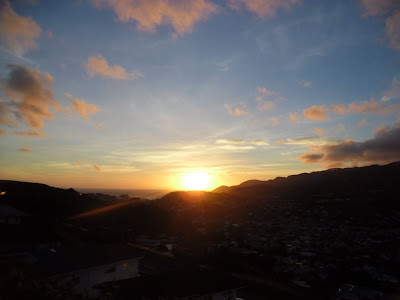 I'll dwell on this irritatingly alliterative scene, if I may... 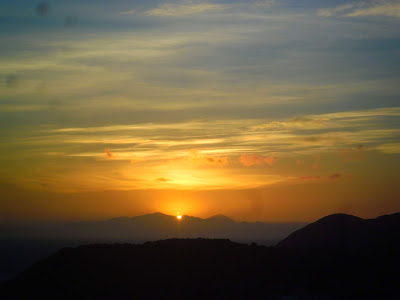 Did we make it back to West Wind? Why, yes we did as a matter of fact! But that is a story for another time, so I'll ride off into the sunset now. As ever, thanks so much for taking your time to read my blog. Cheers, Oli 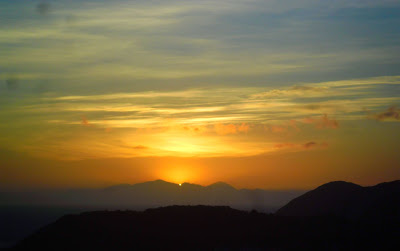