A chance to head away for a weekend out of town on an end-of-summer mini-holiday was gratefully seized by Mrs Roadworks and I, along with our youngest son, 11 year old Bodhi. After much deliberation we had decided the Top 10 Holiday Park in Hastings would be our destination, so all that remained was the wait until Julia's first ever annual leave leave was due and the Karapoti/Ironman chaos had passed. Before long it was Friday and time to pack up the trusty Sube and head off on our brief adventure. 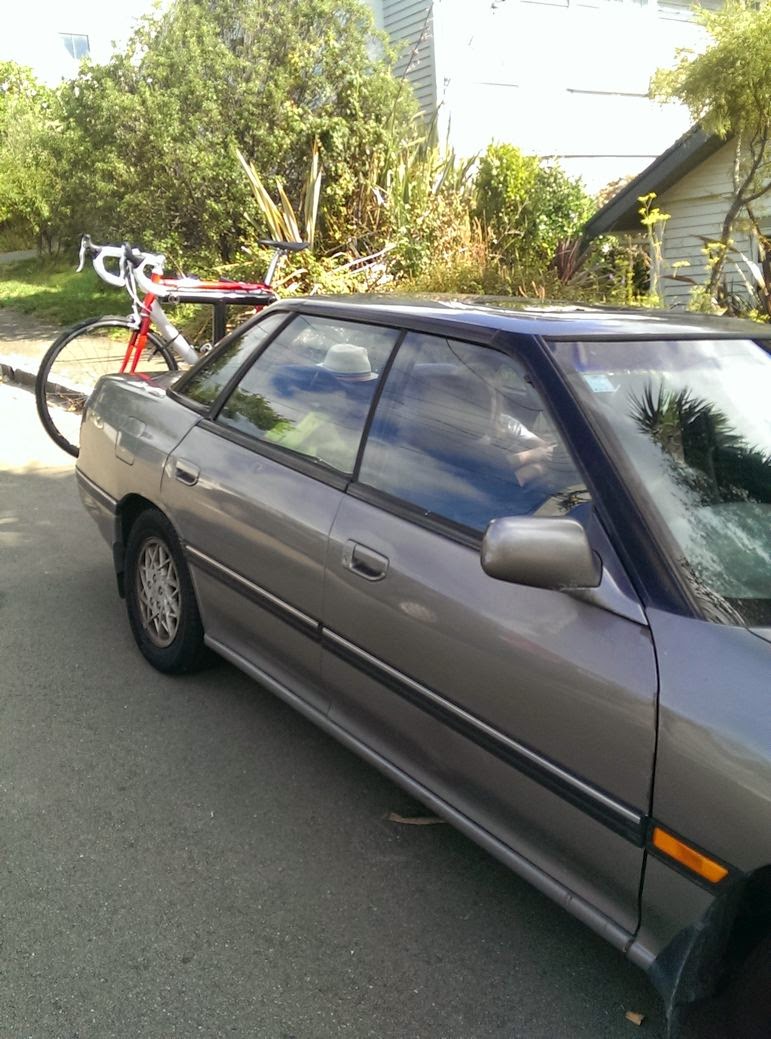 As Julia and Bo had expressed no interest in riding whatsoever, I chucked my beloved Benson on the back to take advantage of the opportunity to ride some new terrain while they sifted about in the pool. A fun drive through the Wairarapa and Manawatu passed swiftly, then it was time to settle in to our digs. 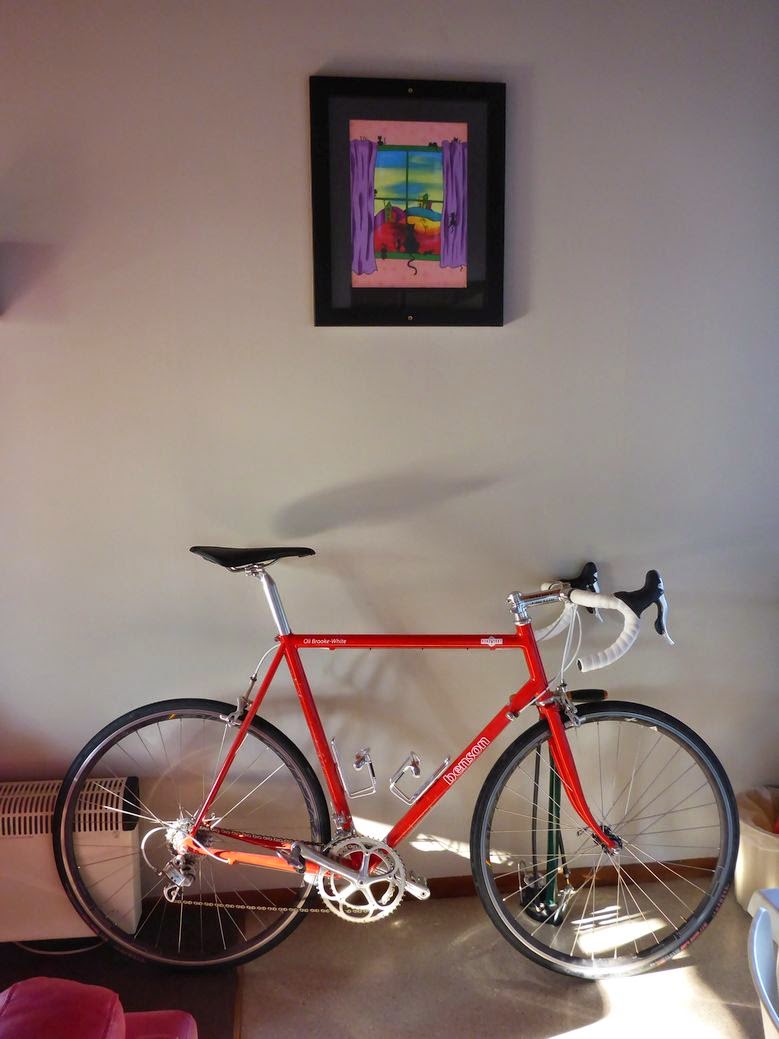 After a trip to a supermarket sadly bereft of decent beer, I relaxed on our patio with a Hawkes Bay red to plot the following morning's moves. 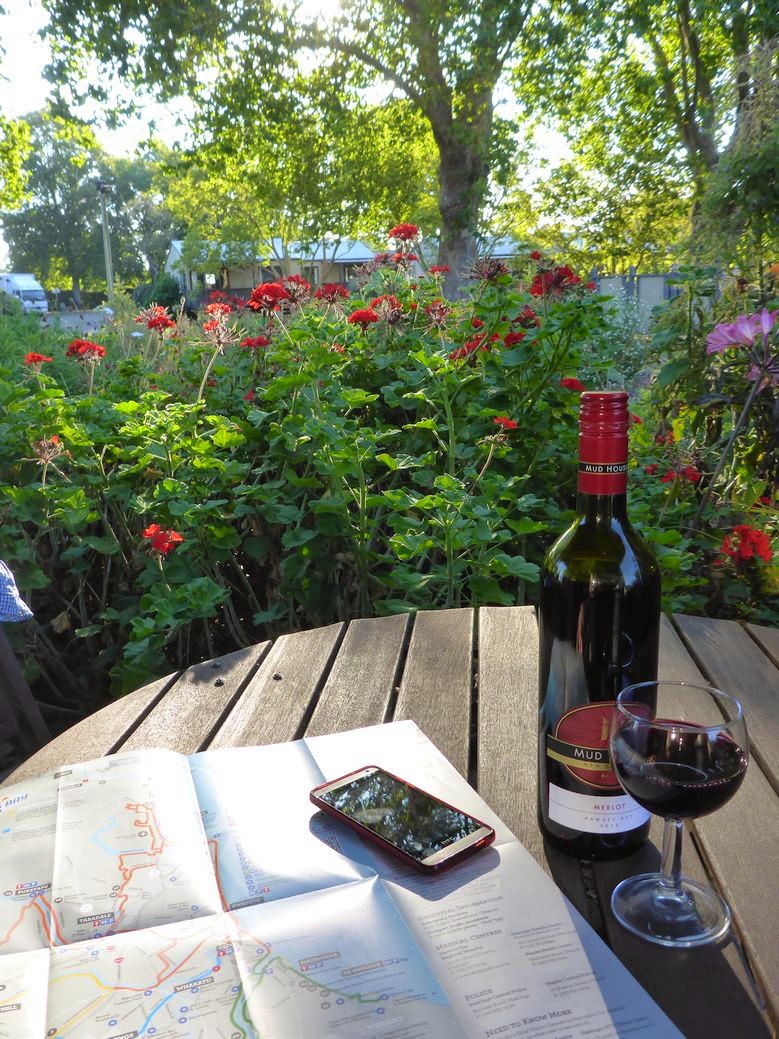 The day dawned warm with high cloud and a light easterly wind - perfect riding conditions. As soon as I got rolling I found myself on wonderful dedicated bike lanes, although they did come to an abrupt halt soon after... 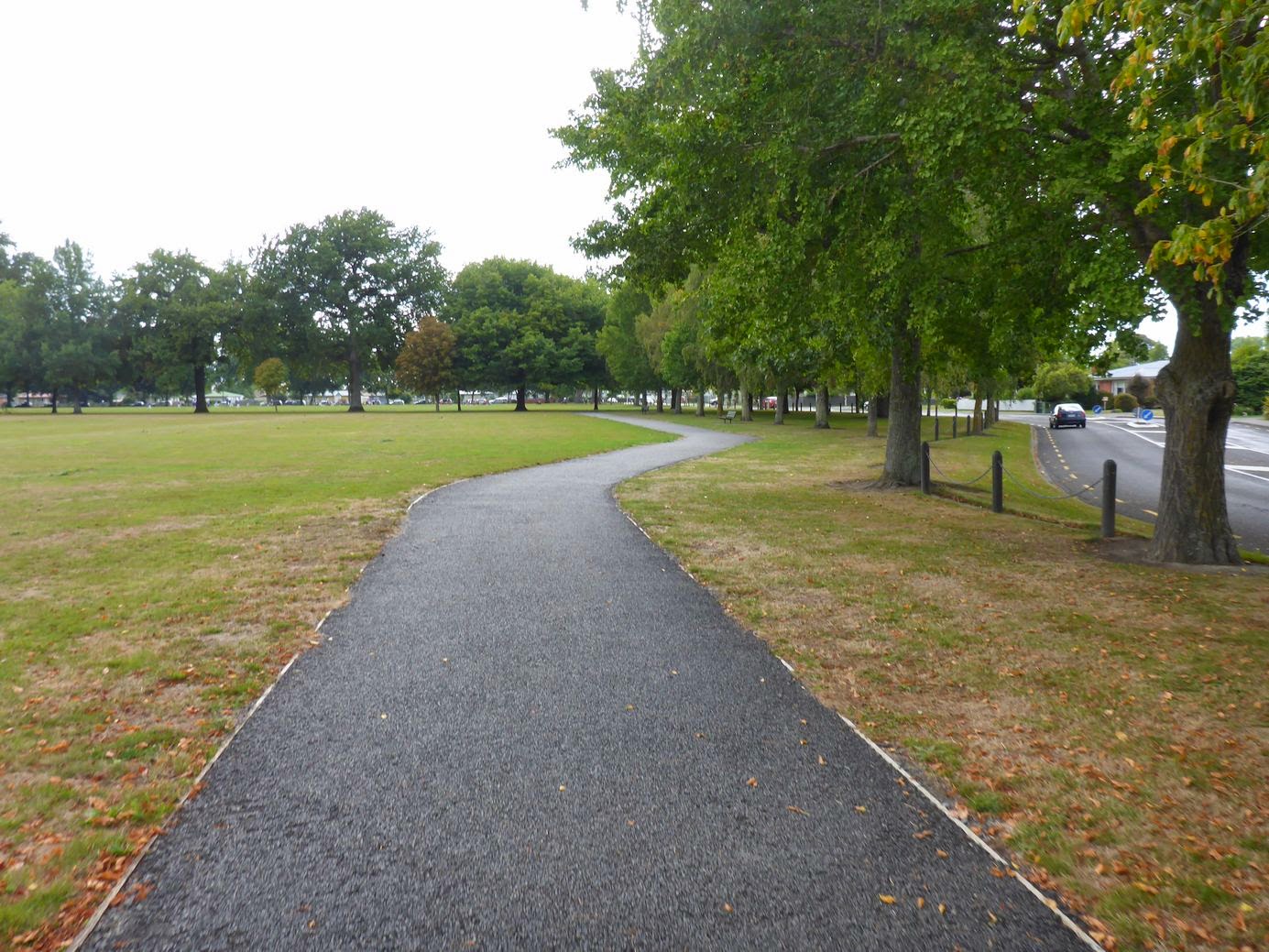 Despite my assiduous route research, there was no helping the poor navigational abilities that put me on the expressway to Napier, or the fact that I forgot the map that would have helped keep me on track. Somewhat baffled, and through an apparent total lack of street signs unable to work out my location, I was very pleased to see a glimpse of bike path off the port bow, and I clambered awkwardly over a gate... 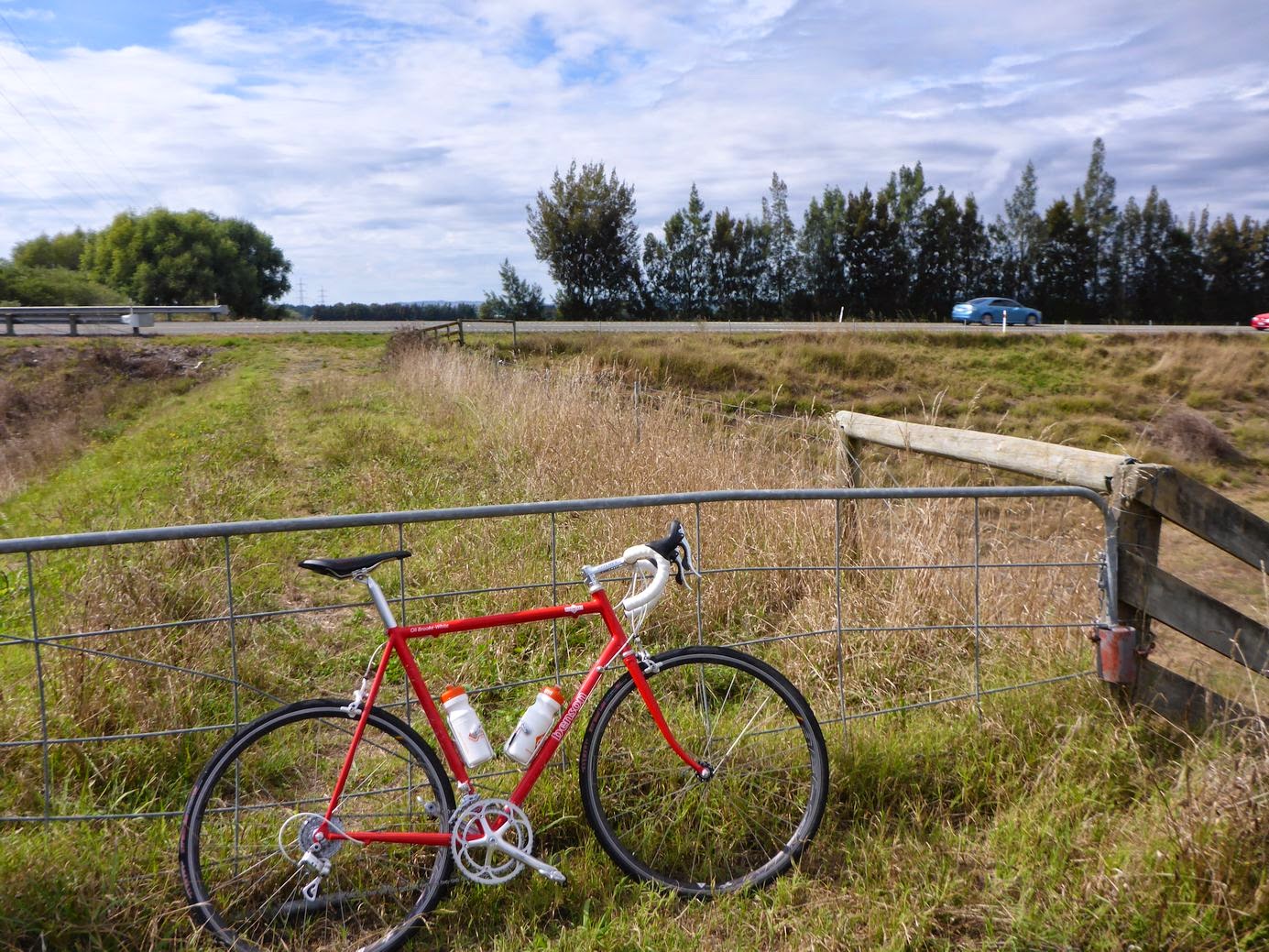 And assessed where I was at on the awesome map board. 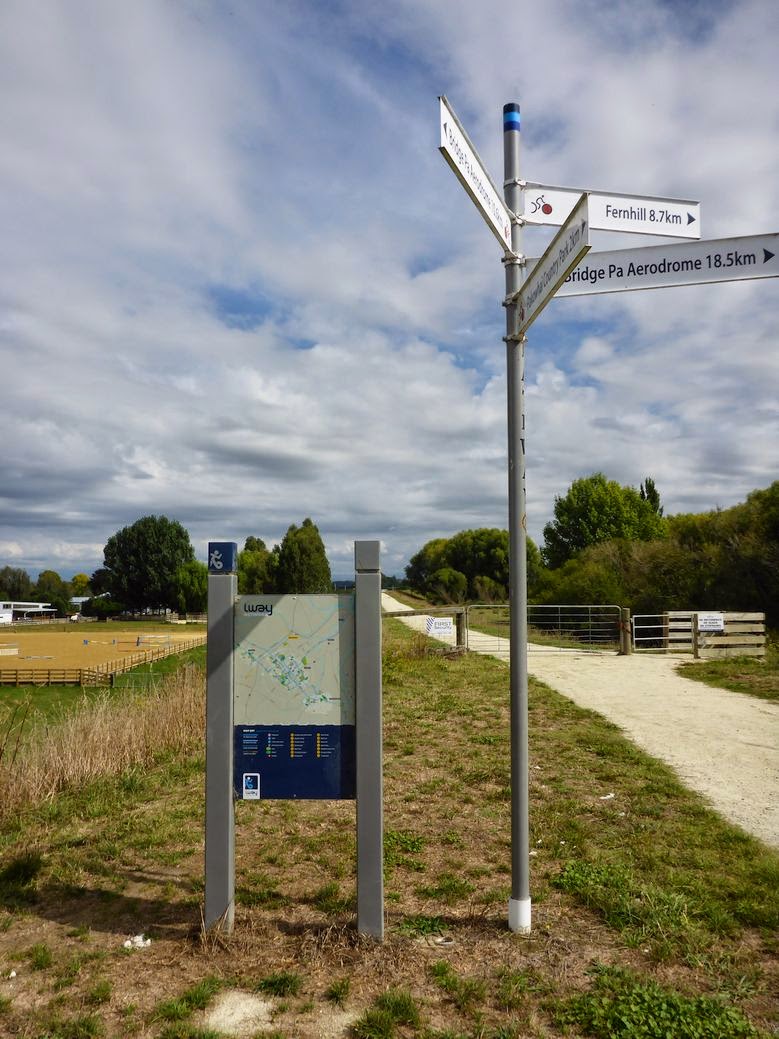 Straight away the trail held promise of exactly the sort of riding I was hoping for. 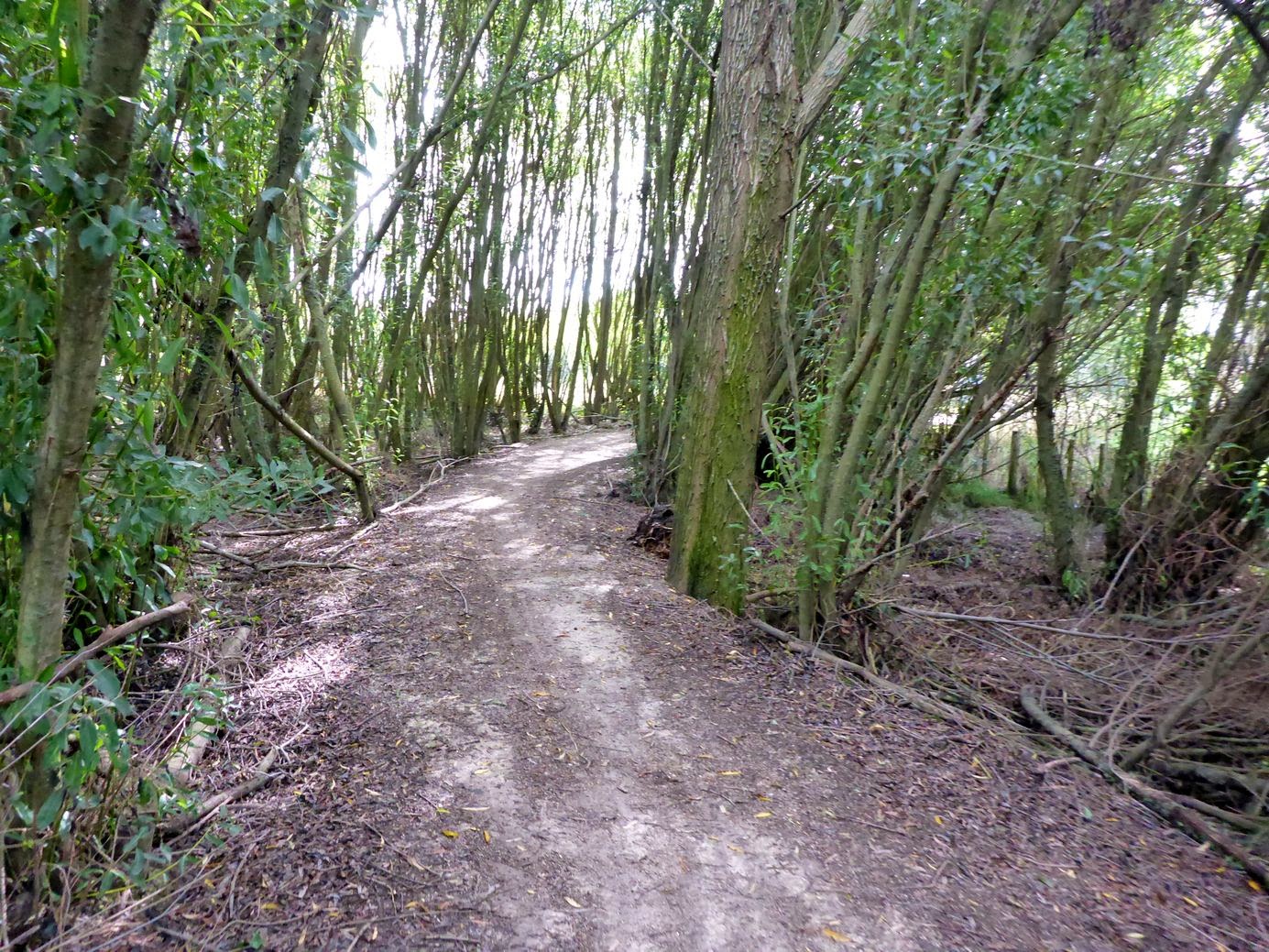 Well-formed trails abounded and many groups of keen cyclists were taking full advantage. I helped teach this particular clump of hi-vis wine enthusiasts how to navigate the many gates by tipping their bikes up onto the back wheel, much to their profuse and wine-fuelled gratitude! 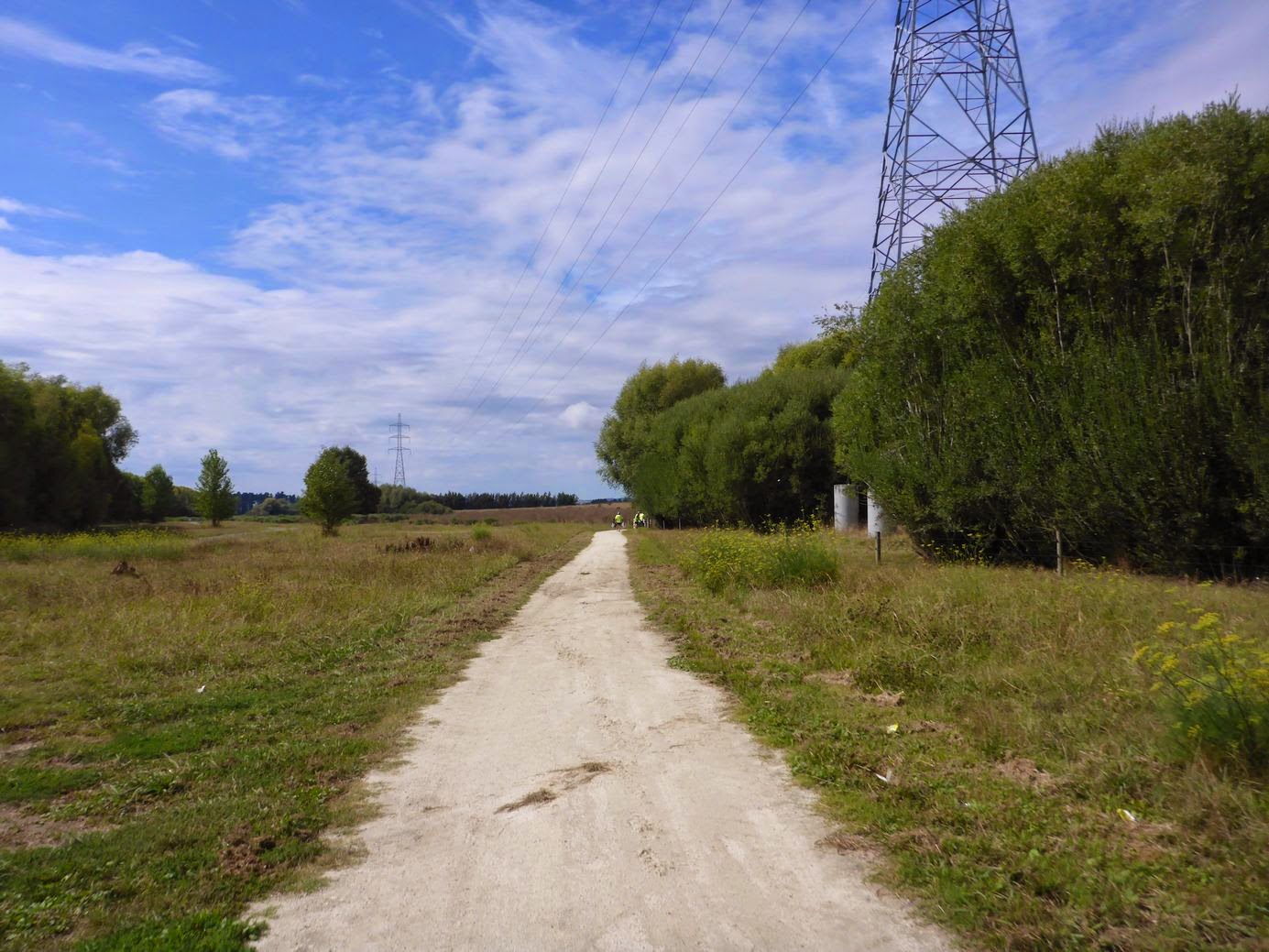 The trails stretched out before me... 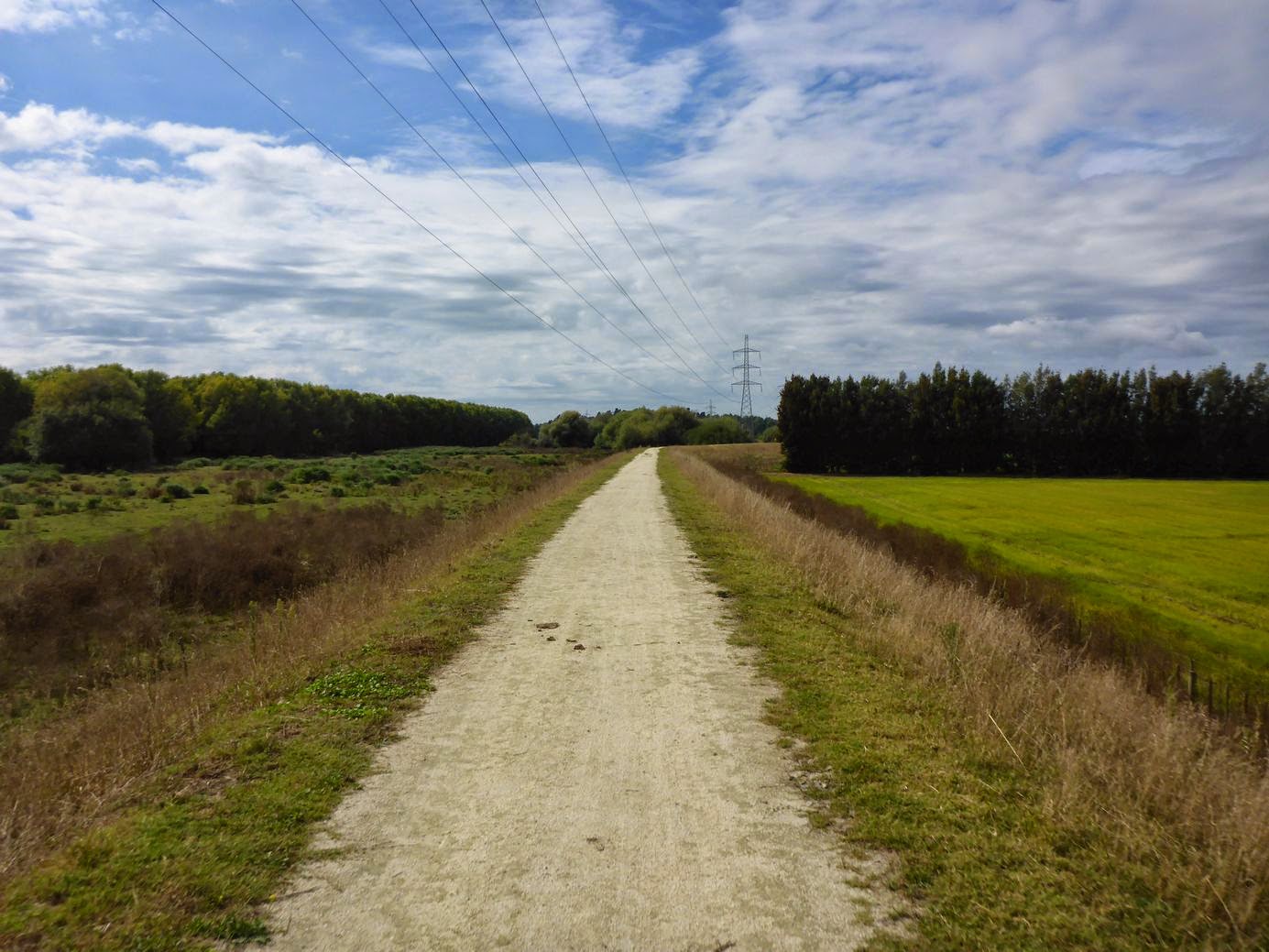 And I soon got into a great rhythm as my Benson revelled in its natural and intended terrain. 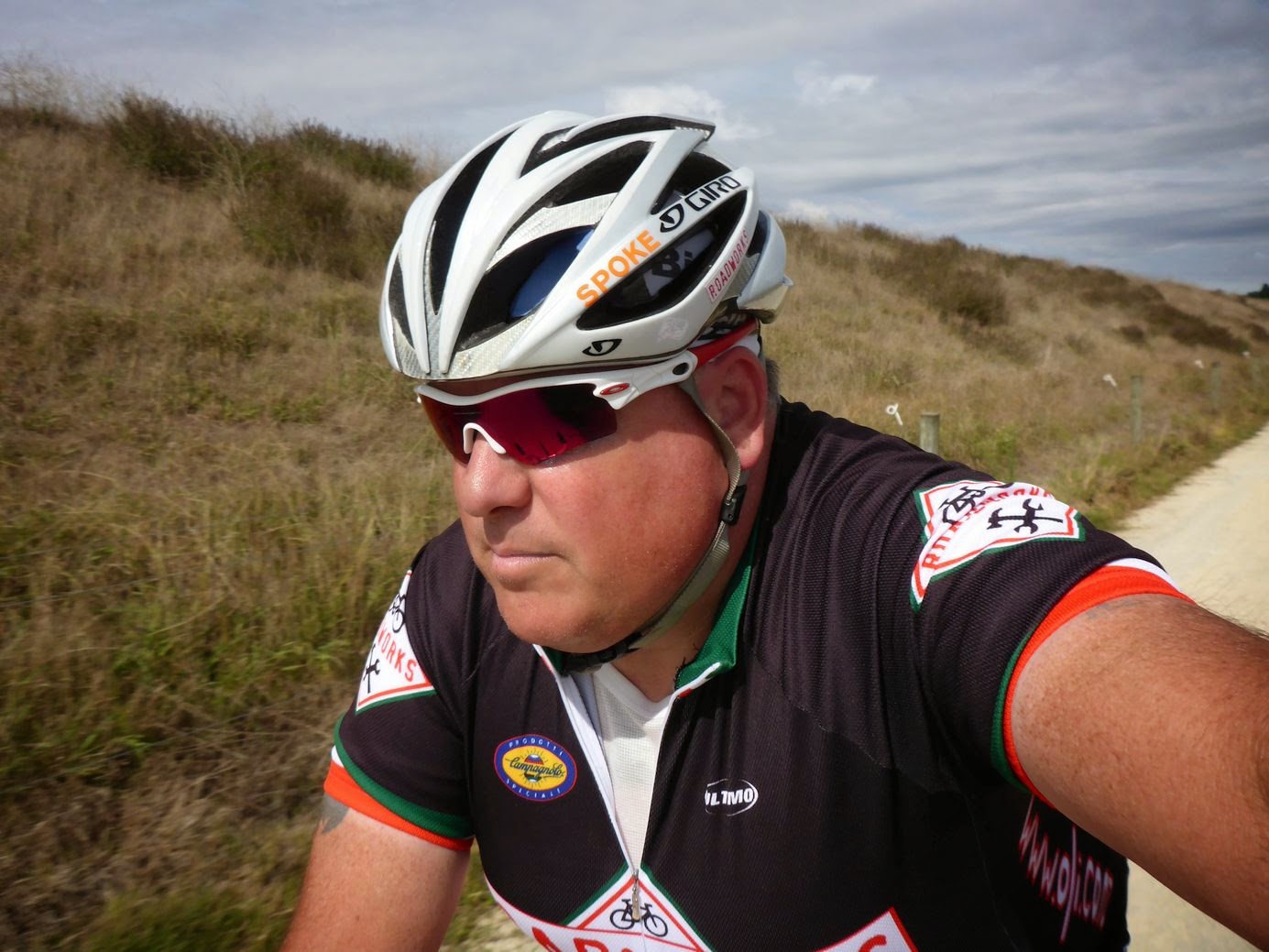 The path was following a river towards the Bay itself, arrowing past vines and apple trees.

I hit one patch of actual gravel the whole ride, but 20 metres was enough for the poor tyres struggling under my vast bulk to pinch flat for the third time this year already. I need tougher sidewalls and/or to lose a shit-ton of weight, stat. 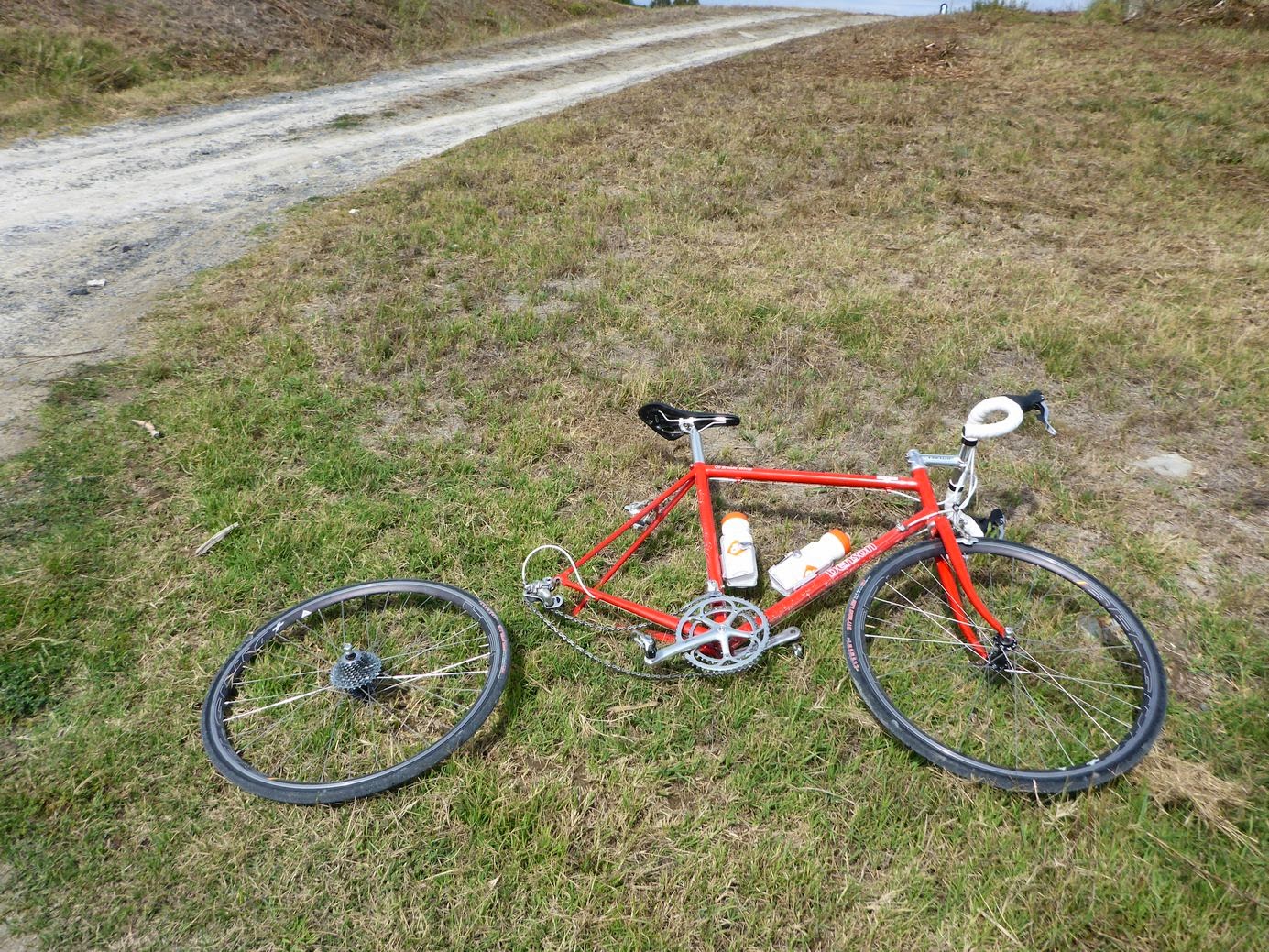 Never mind, it was fixed in five minutes and I was off again, hitting the coast in short order. 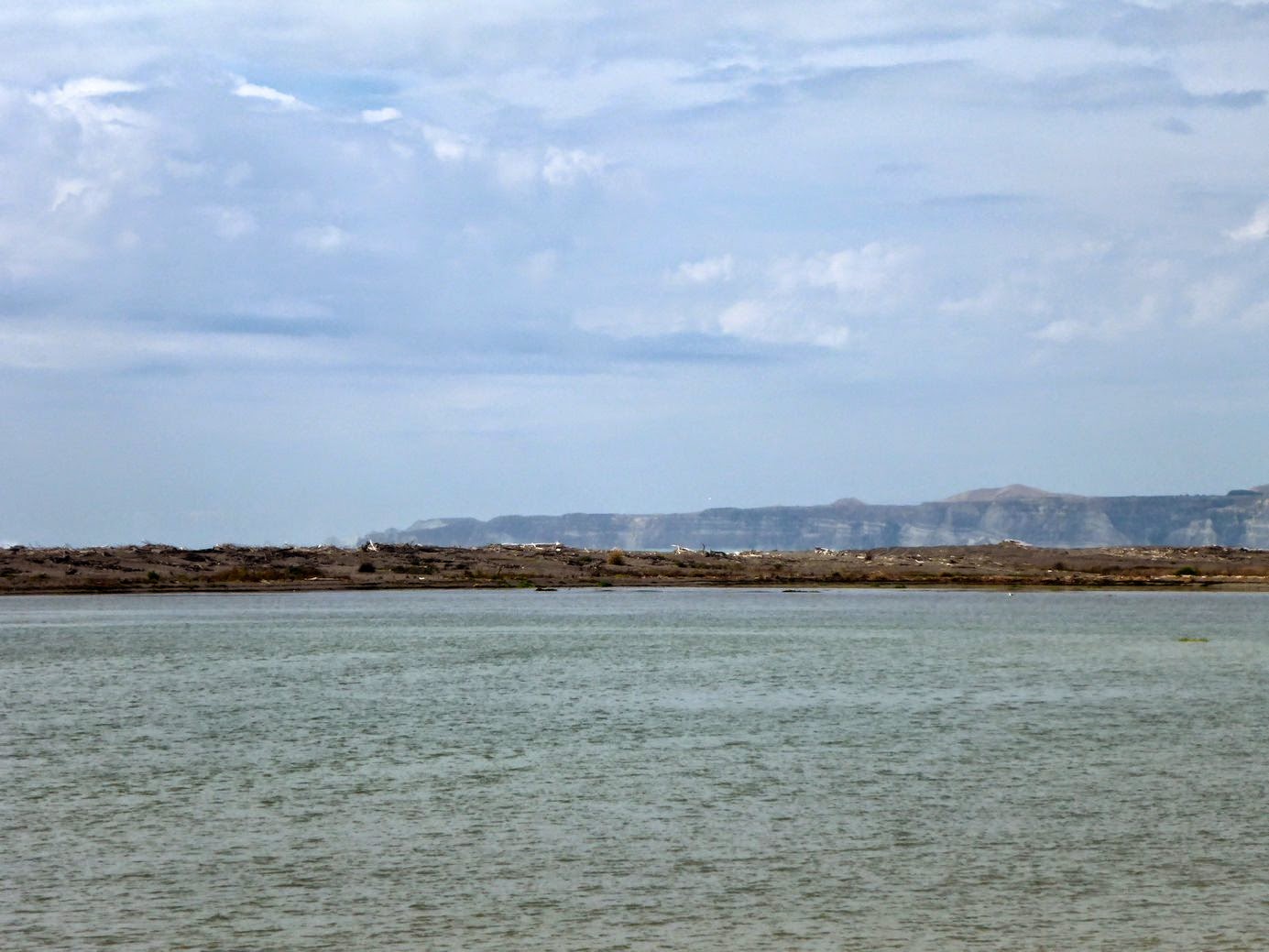 The breeze coming off the ocean was just cool enough to take the edge off the hot day, as I meandered south following the coast. 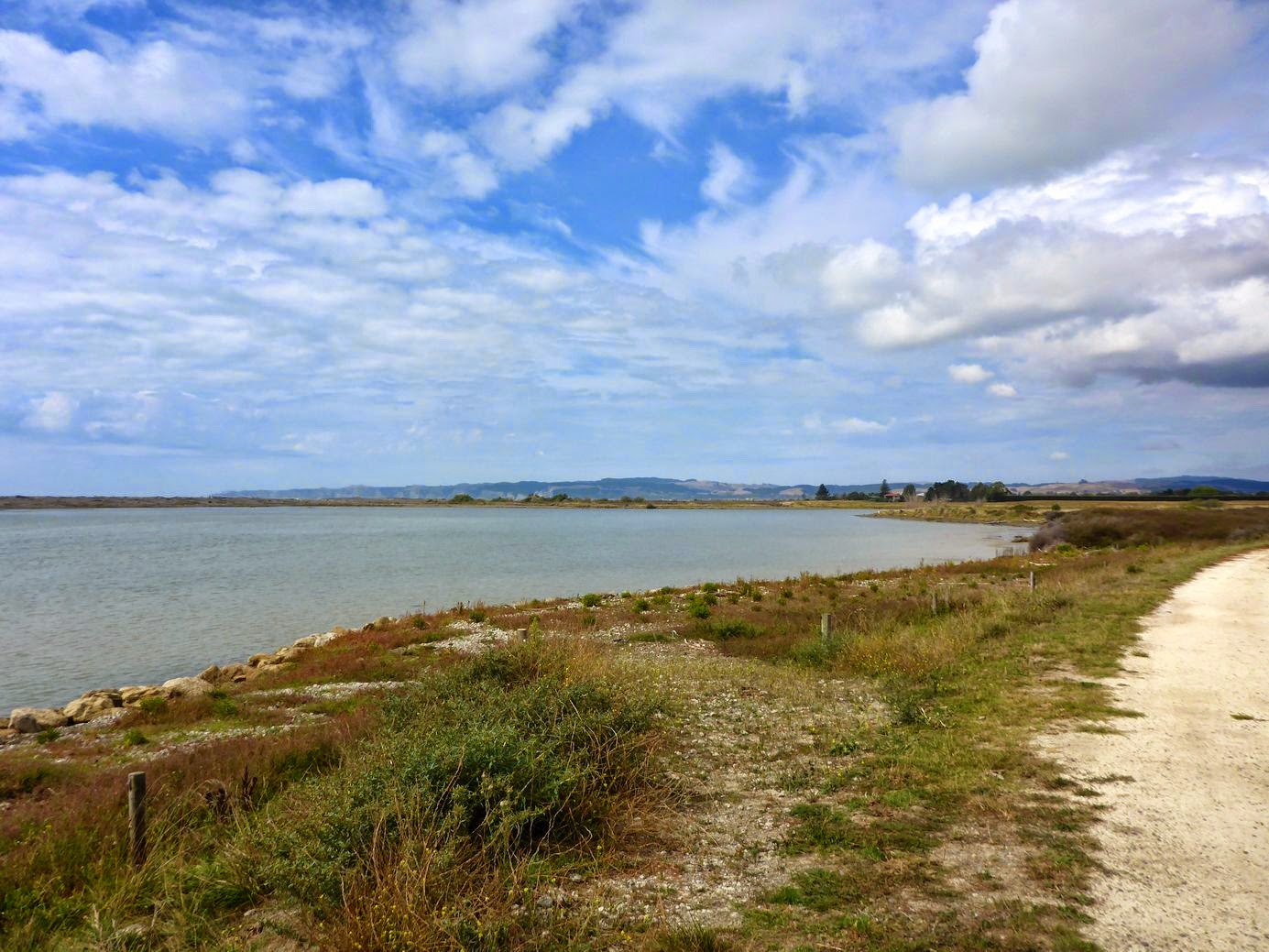 This sign on one of the abundant (and somewhat irritating by now) gates confused me for a minute or two, before I worked out that the bike path was different from the stop bank. Signage and my lack of comprehension of signage seemed to be a constant theme of this holiday, but there you go - you can't be this pretty and smart... 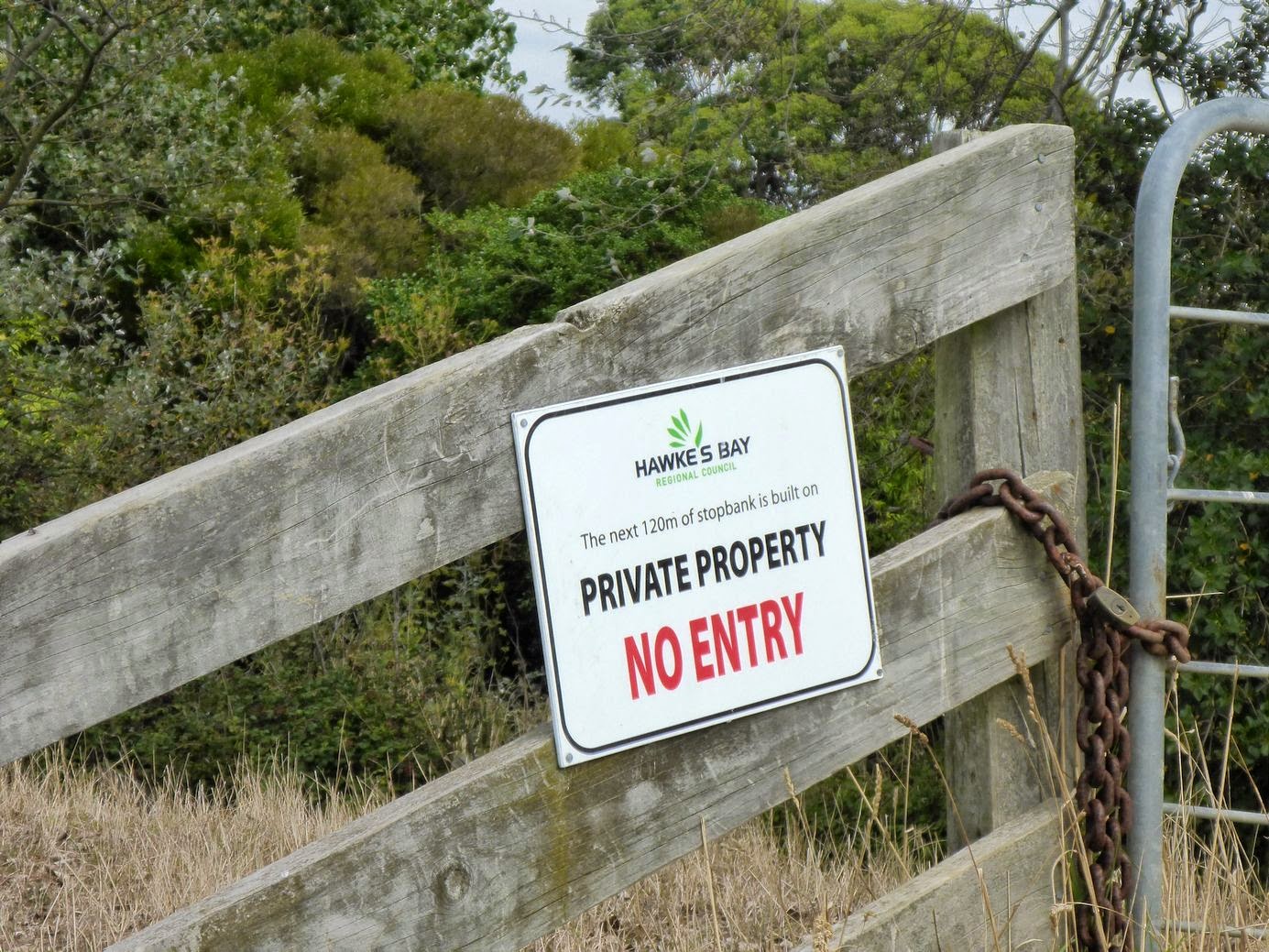 After being diverted back inland I crossed a bridge into the historic town of Clive, then followed the estuary back down to the coast again. 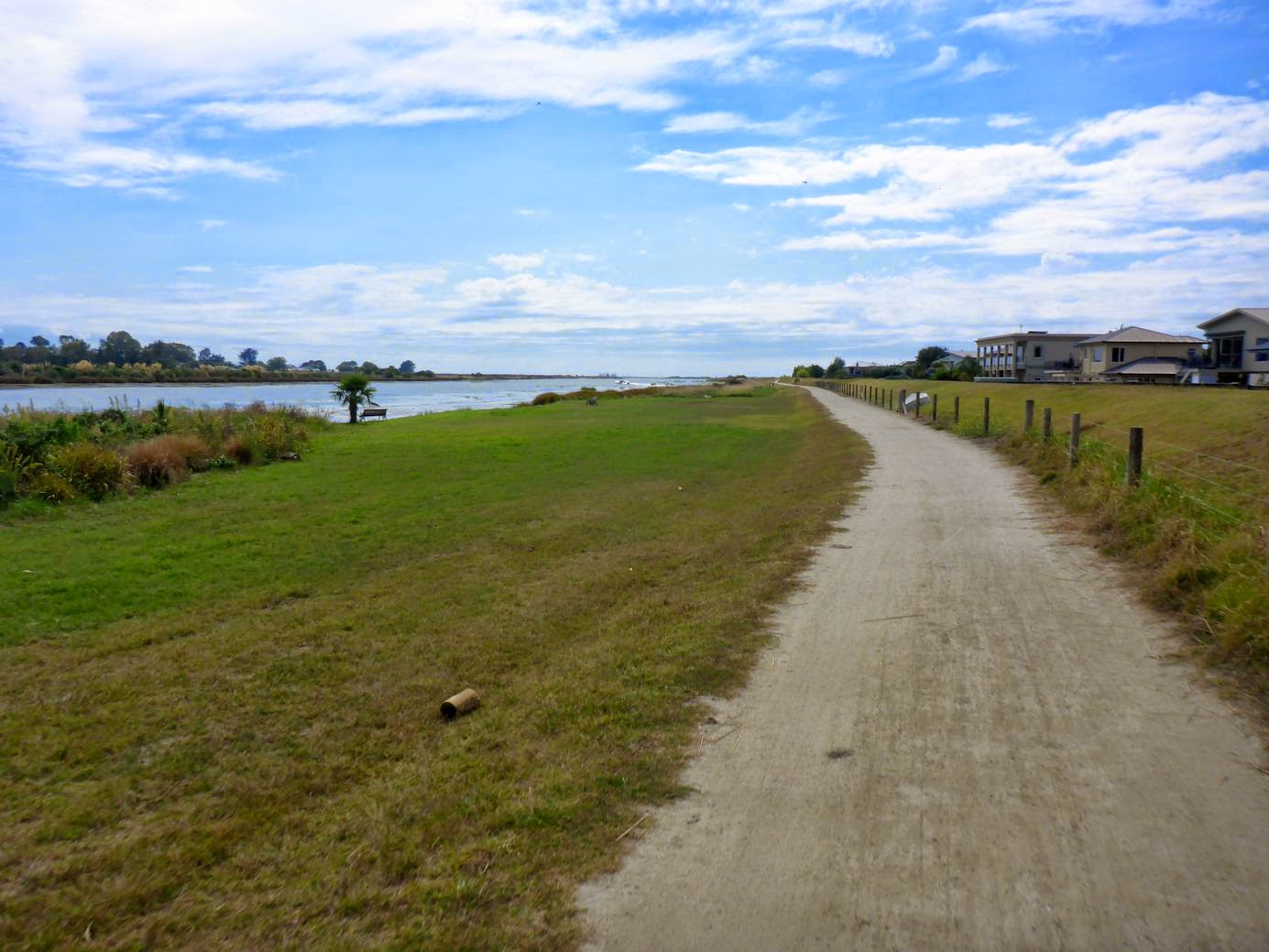 I think that is Napier's Bluff Hill in the distance? If so, the Brooke-Whites would be standing atop it later that very evening... 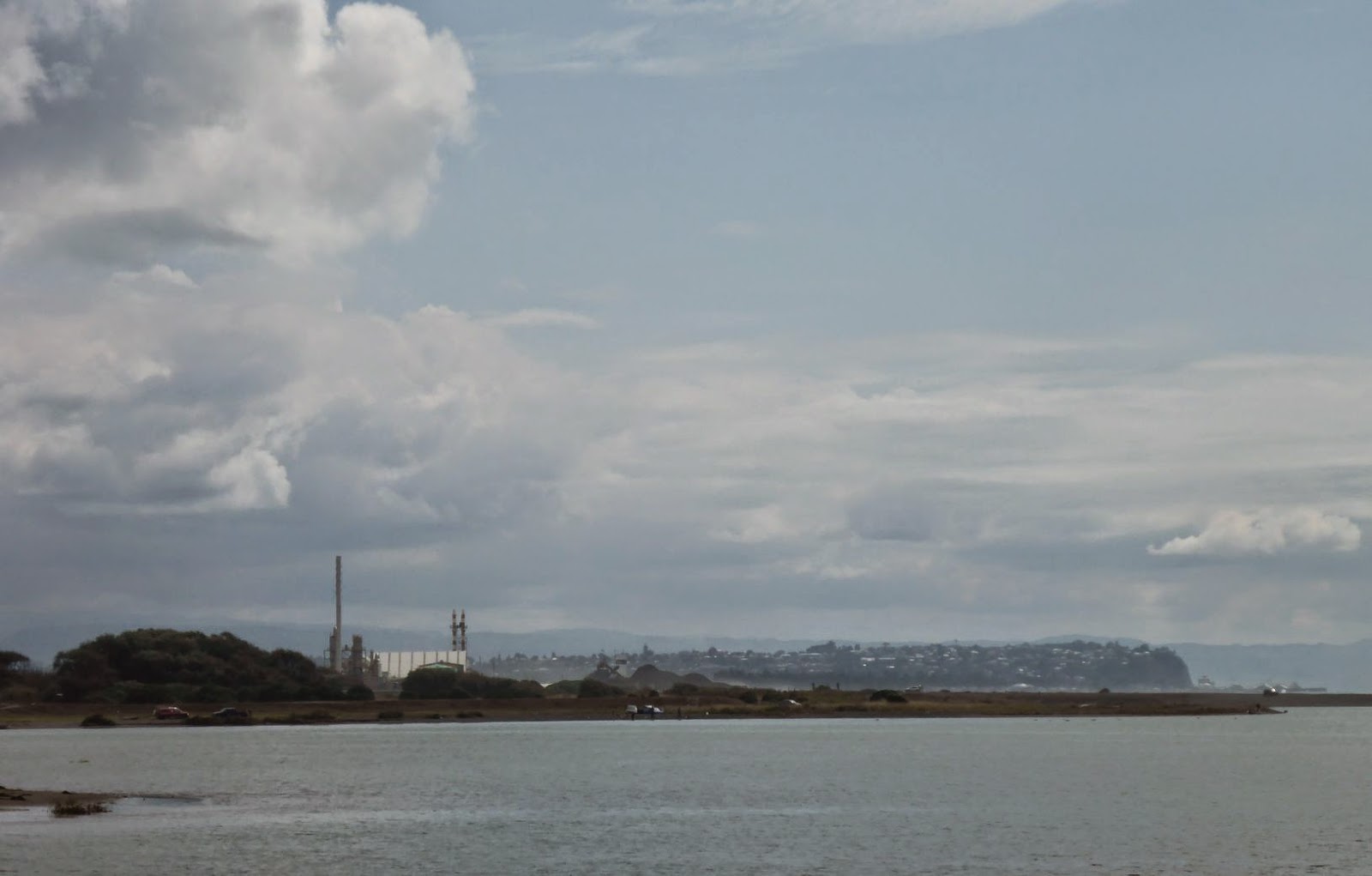 A crested grebe sits atop a piling. Or would you prefer a shag on top of a pole? 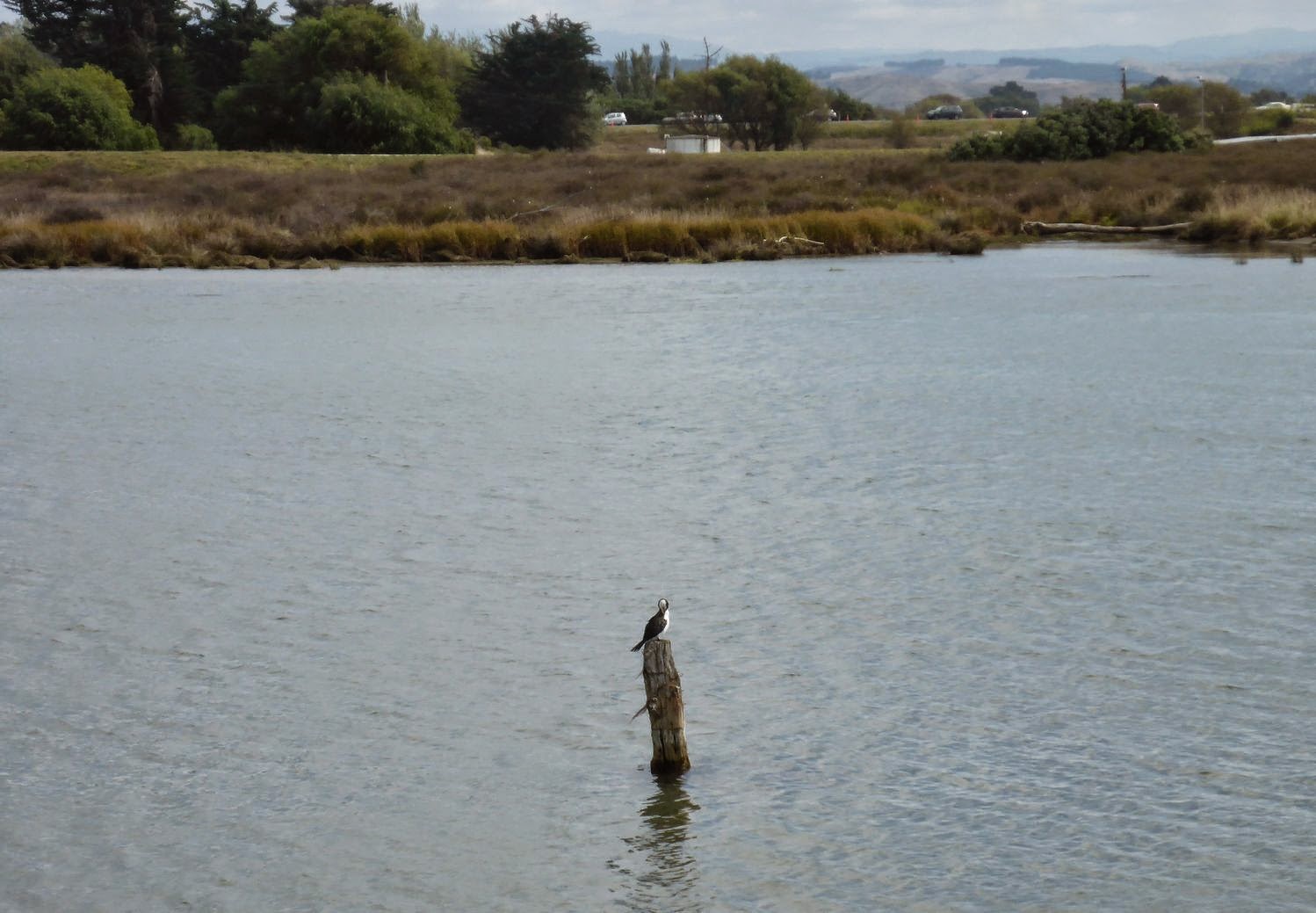 The time had come for the obligatory bike pose. 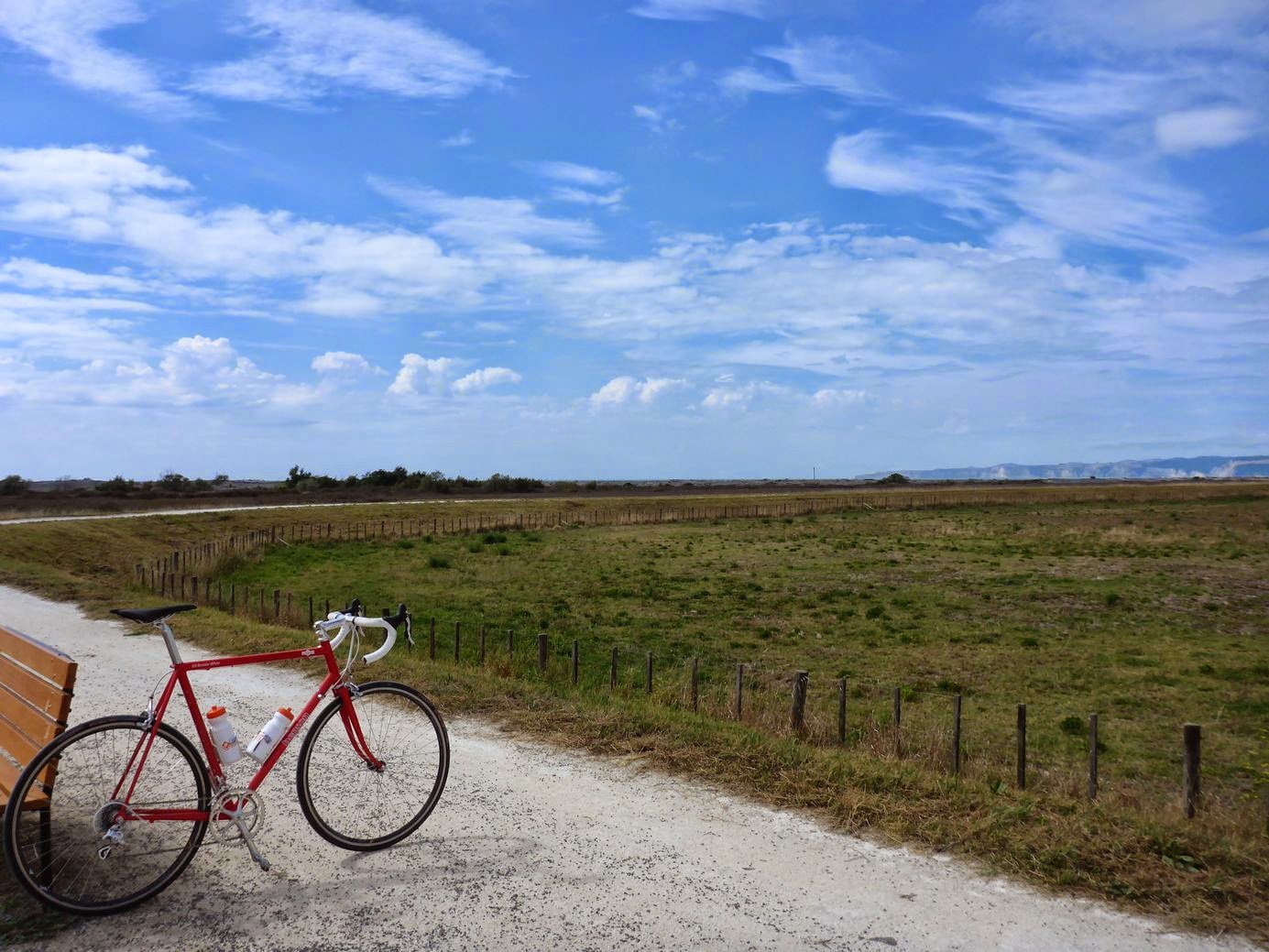 The trail wended its way past some beautiful wetlands teeming with birdlife. 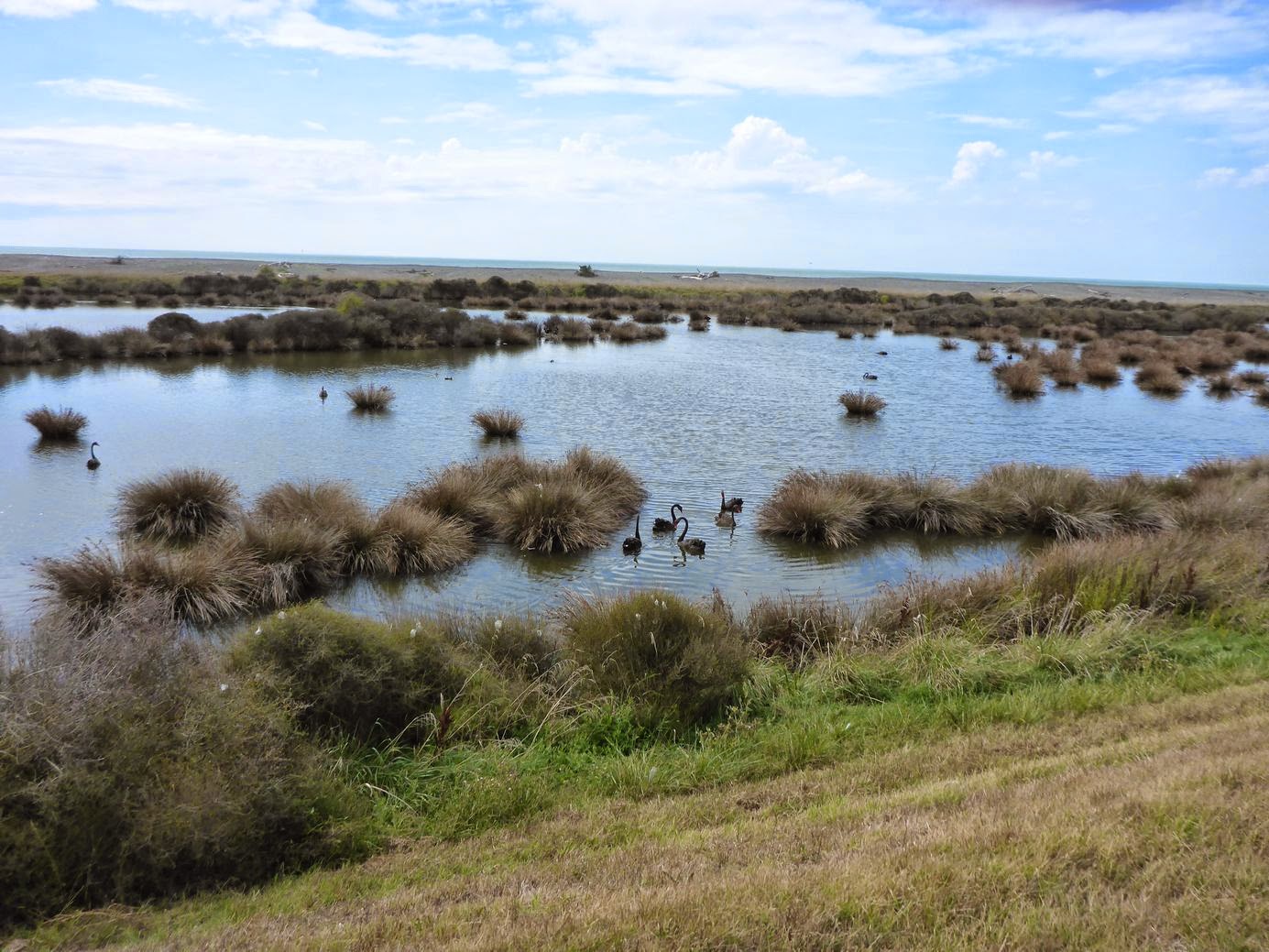 I rode past some cheery apple pickers (everyone was so friendly here!) until I hit Black Bridge Road where I decided I'd turn around and meander homewards. 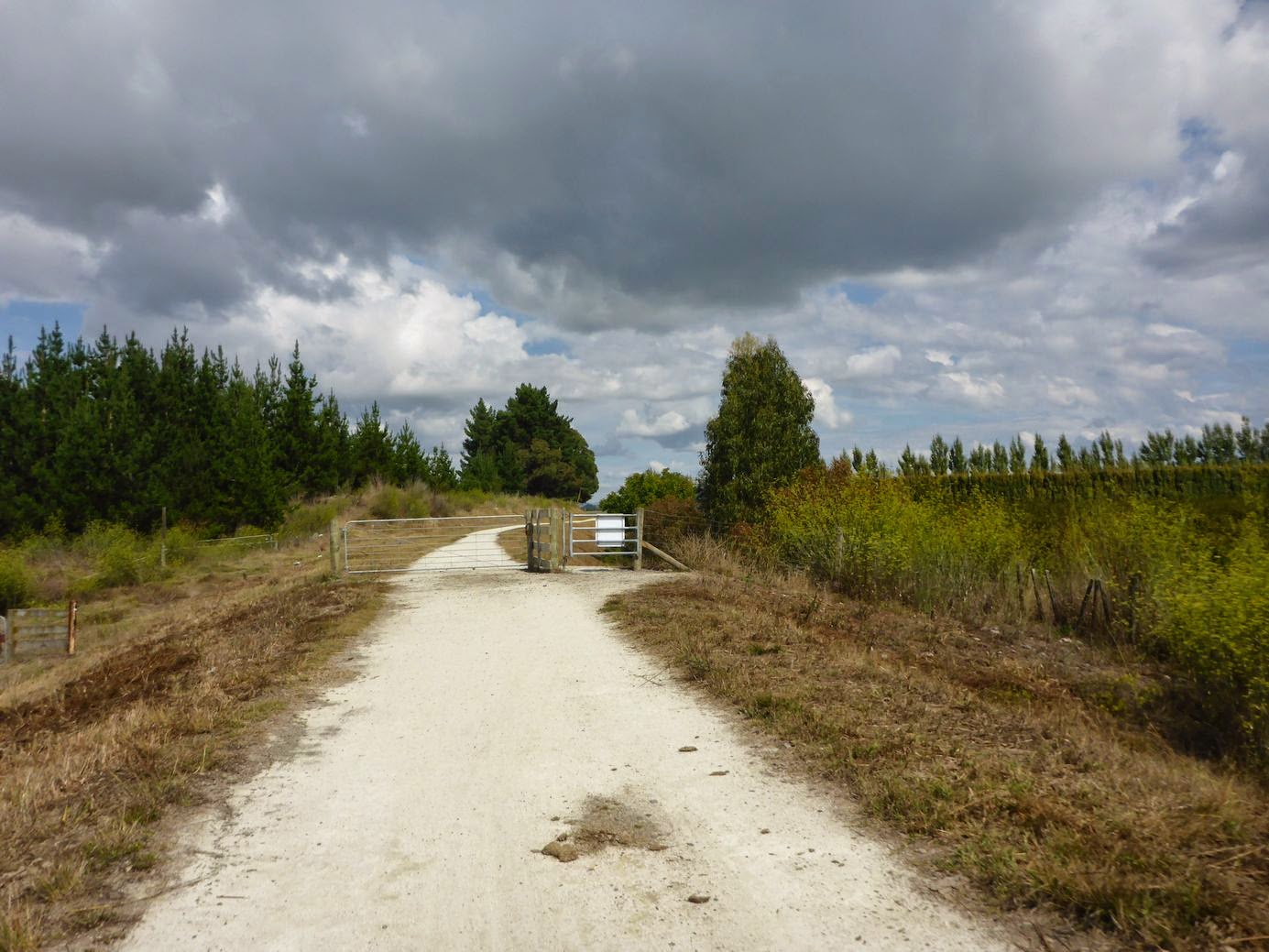 It was only when I reversed direction that the need for all the gates became obvious. Having experienced the perils of frisky cows many times over the course of my long and interesting life I considered myself warned! 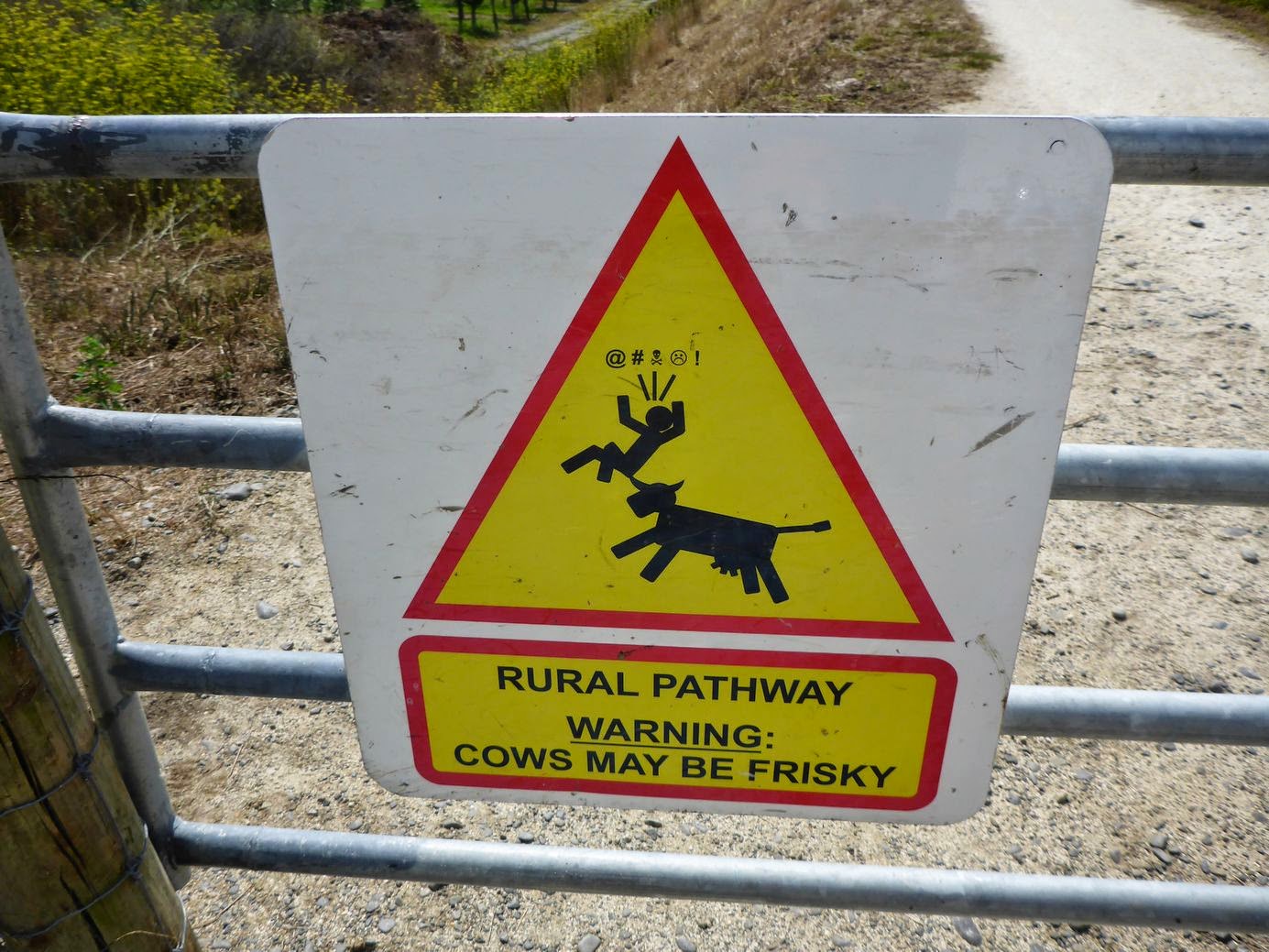 Why did the pukeko cross the road? 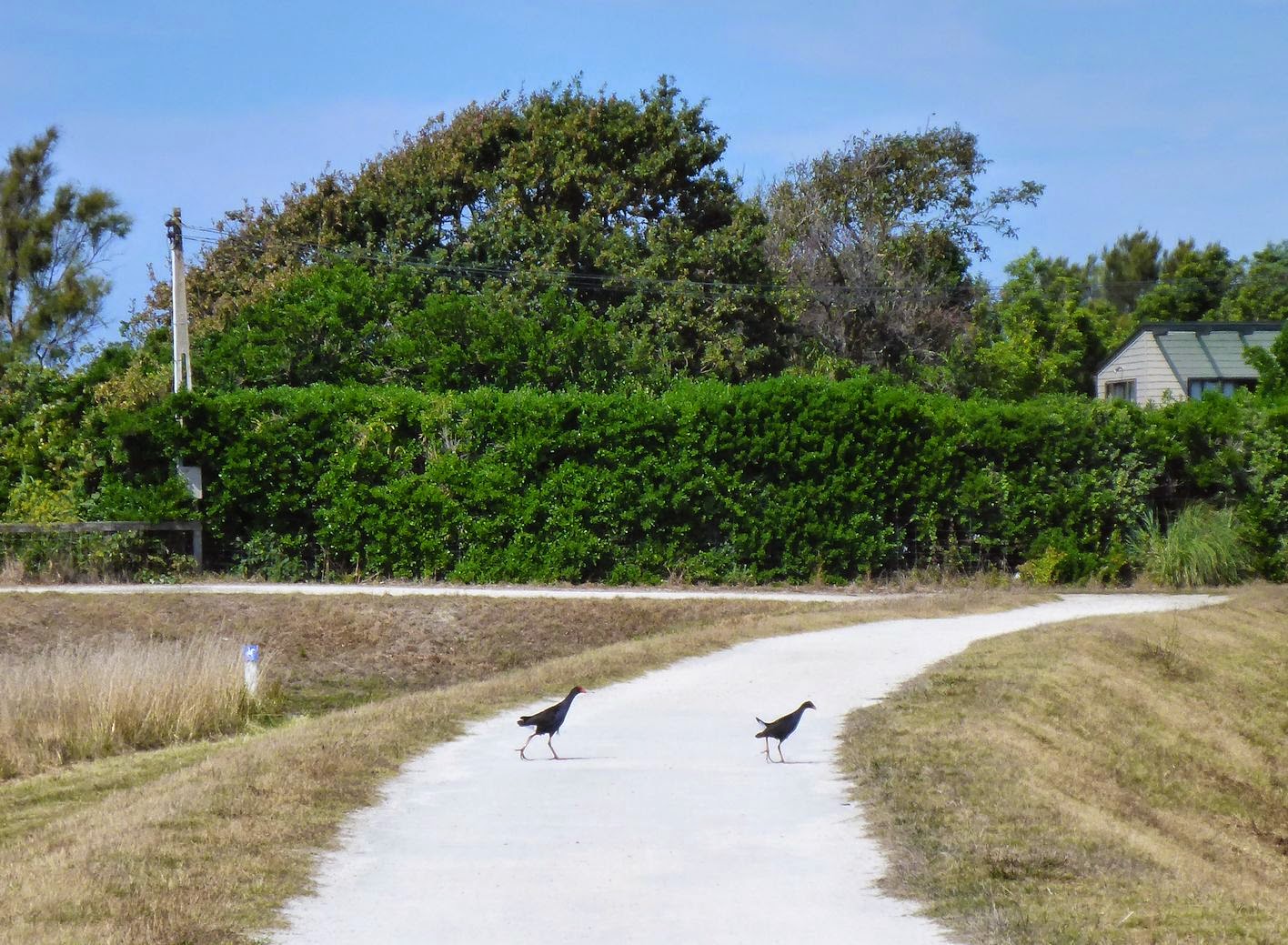 Back into Clive past a waka taua out doing a corporate gig, complete with 'ka mate' haka being performed by the kaumatua in the stern. Very cool. 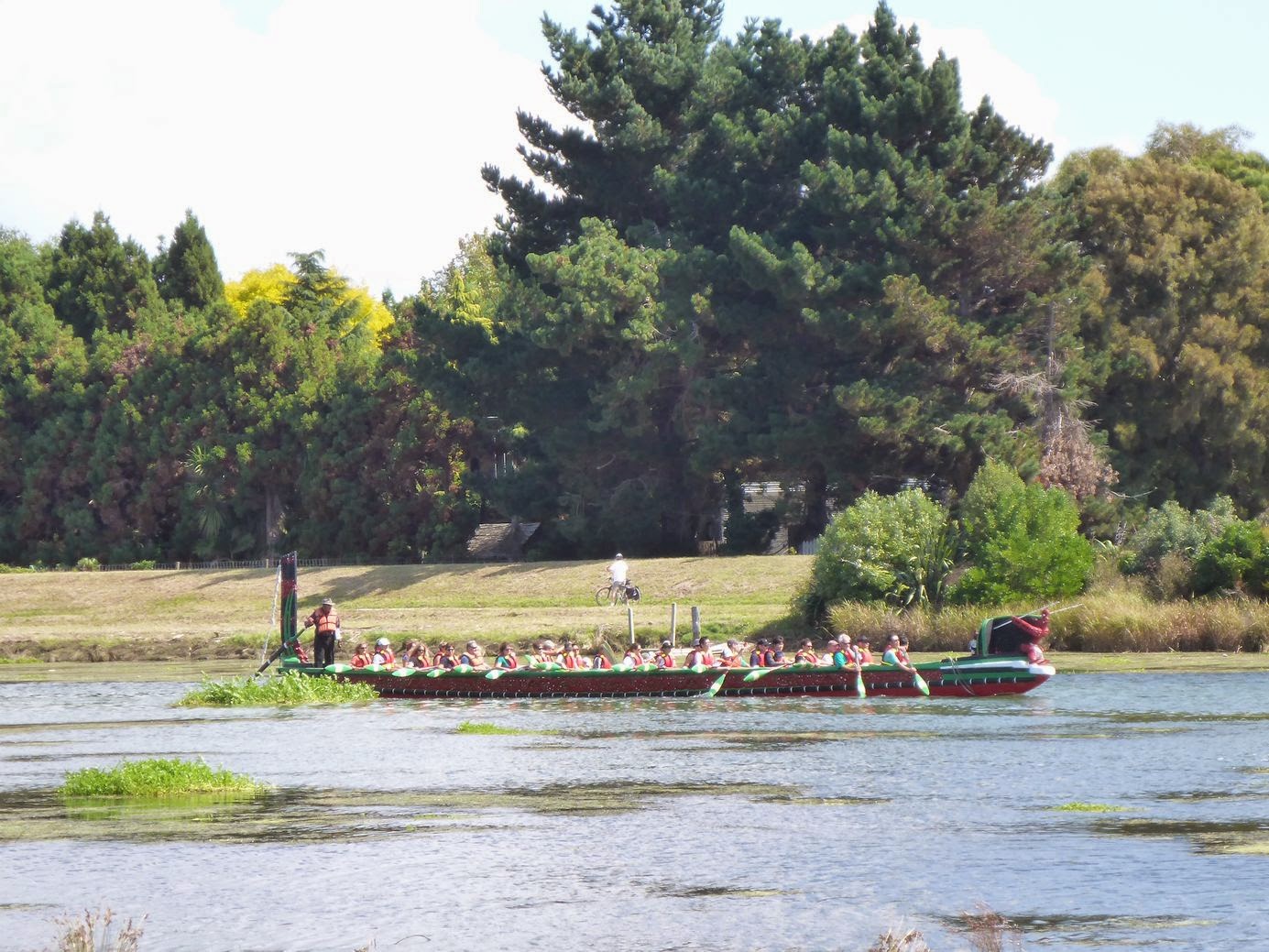 Realising I was already thirty minutes later than I told the family I'd be I began to head back in the direction of Hastings. 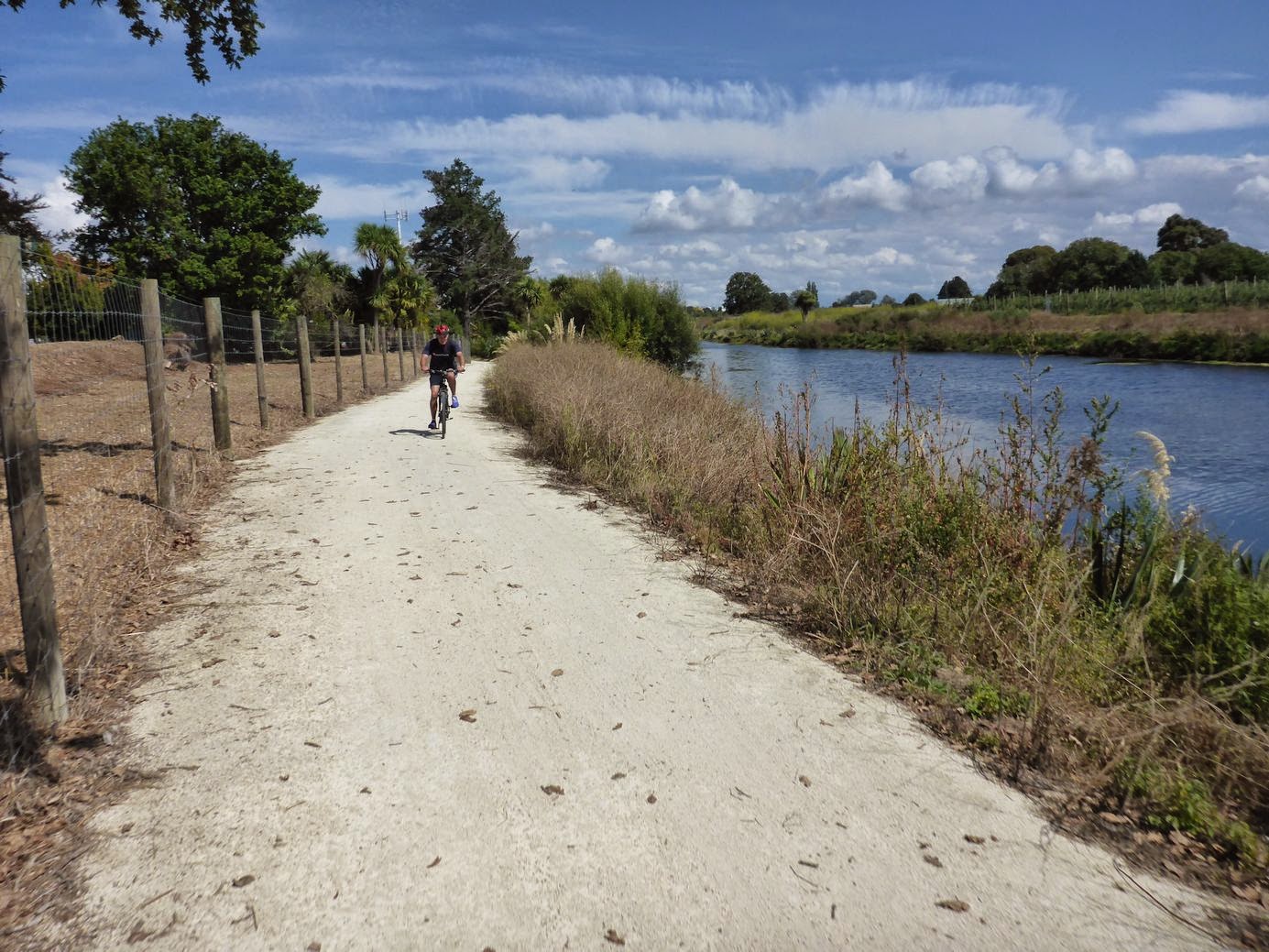 Despite not being super confident I was actually heading in the right direction, I took a leap of faith in my directional sense and luckily this trail followed the railway lines... 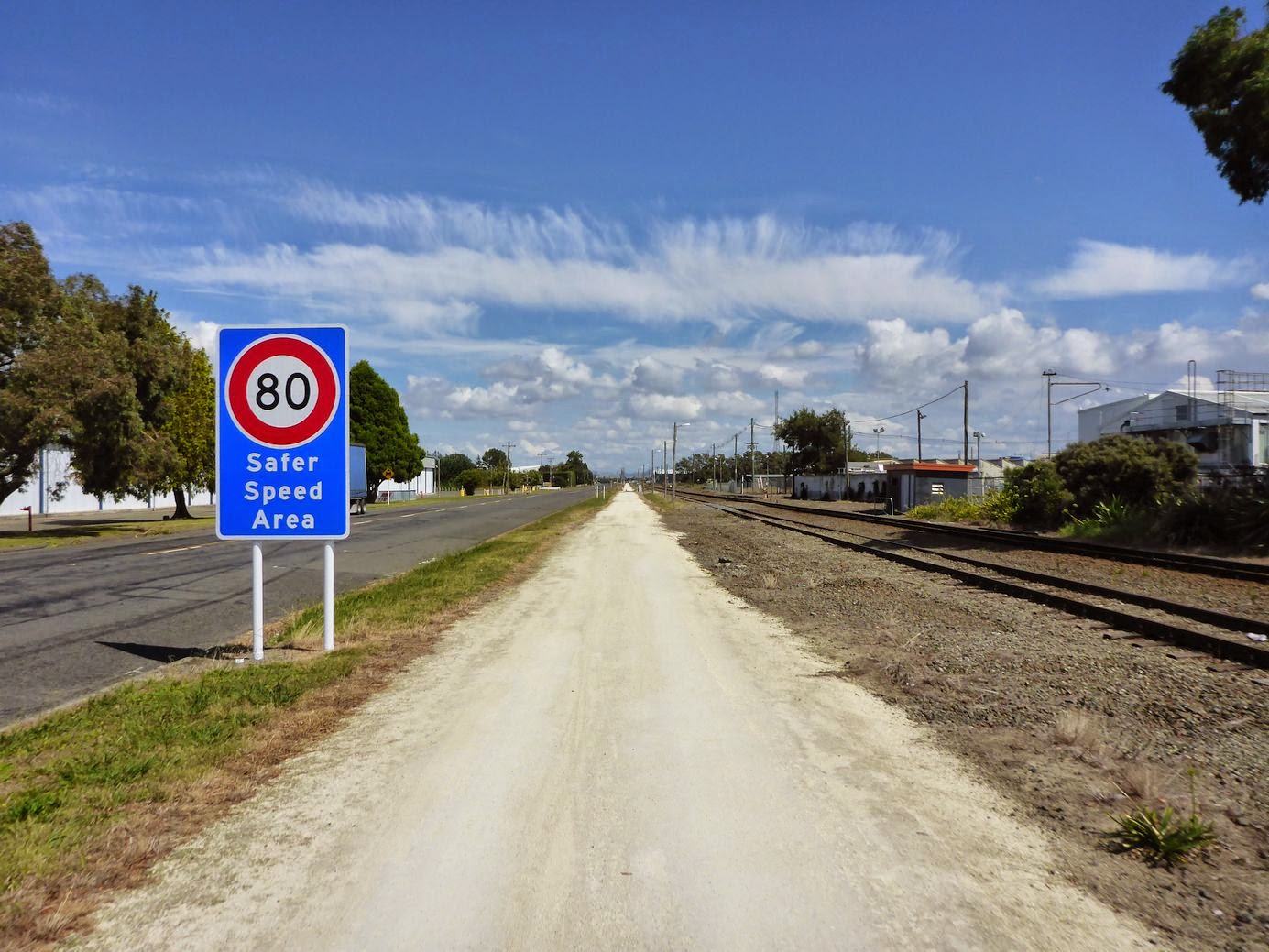 Until eventually spitting me out onto roads familiar to me from the morning, much to my relief. 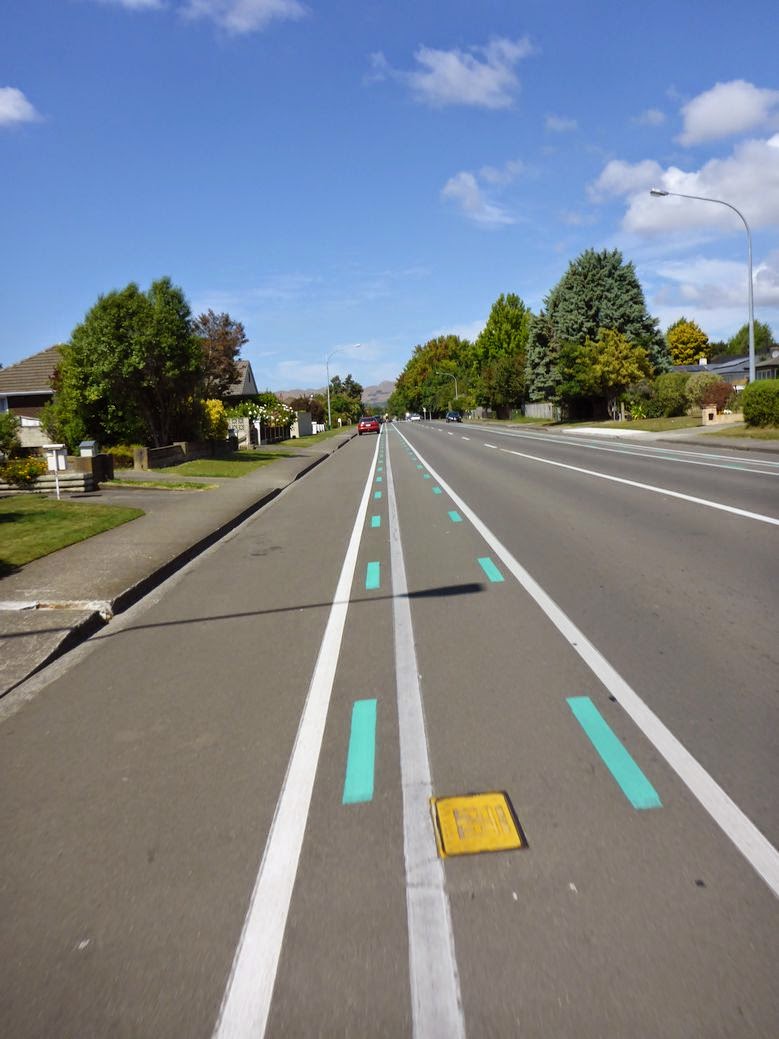 With the destructive Cyclone Pam looming, bringing preceding high winds and intermittent spells of rain, Sunday was spent doing touristy things instead of riding. But this one day taste of the wonderful trails and roads of the Hawkes Bay was enough to convince me that it won't be long before I head up there again to explore further... 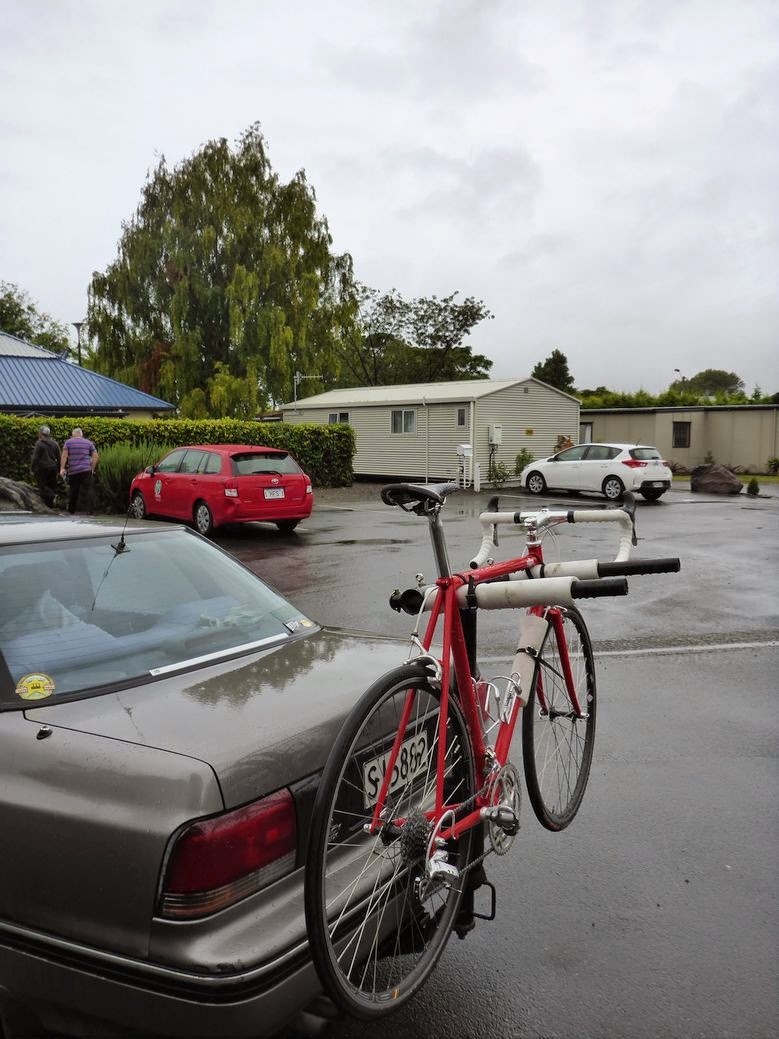 Who knows, maybe it will even inspire another blog!

What a treat to see you using this format! And it sounds like your short holiday was a treat too. Bravo!

Inspired by you, my man! And with the added bonus of a whole day that I can't work, do housework or ride - I had to find some way to pass the time!