Holy maladjusted derailleurs! Twelve days since my last post and it seems like just yesterday - it's been a mad blur of work and socialising but finally all the repairs are done, the shop is swept and clean, and hopefully the chaos has abated for another year.

I'm pretty sure I've worked on some nice bikes of late, though I can't really remember, but I can definitely tell you how much each different Star Wars Lego set in the world costs and where to find the best wizard costumes!

I'm really looking forward to the next few weeks. For most of us Christmas is all about catching up with family, partaking of good food and nice wine with friends, and lolling about on the beach soaking up the sun, and it's going to be exactly like that for the Brooke-Whites too...

I want to wish you all the very best for Christmas and the New Year. Thank you all for your friendship and custom over the year, and I look forward very much to seeing you all in 2008.

Have a Cool Yule! 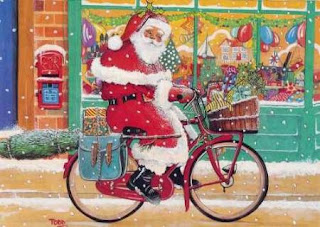 The 2007 Makara Rally is done and dusted - and I do mean dusted! It's rare for the Park to be so dry at this time of year, and the race was held in record heat with the looming rain not arriving until after the prizegiving...

The event seemed to go very well on the whole, with around 130 competitors riding in either the Creek to Peak morning race or the Tour de Peak in the afternoon. There were amazing spot prizes and despite suffering in the sweltering heat, most of the entrants were wearing huge smiles at the finish.

I was a marshall for both races, egging on the riders from the entry to Sally Alley in the a.m., and the top of Lazy Fern in the p.m., so I got to see everybody at some point. Being a more social event than a full-on race, it's one of those great chances to catch up with people and have a laugh and a sausage (!?) together.

Competitors came from Levin and Palmerston North and joined Wellington's riders to make for some great racing. All the various class winners thoroughly deserved their accolades, no matter what their final placing, and the non-winners deserve mad props for managing to cope with the fierce concentration that riding Welli-track requires...

Despite the effort required to simply race, some folk went out of their way to make things harder on themselves - one guy dressed as Father Christmas, and looked like he was going to expire from heat stroke, another did a lap of the C2P on his full-on DH big bike, and Team Roadworks rider John Randal rode around with the help of his stoker-bike propelled by his lovely daughter Kaitlyn! Team Roadworks was also well represented by Alex Tashkoff and Matt Isaac, so thanks to them all for flying the colours.

The Makara Peak Supporters did a fantastic job running the show, aided by many able volunteers, and raised a considerable sum that will go directly back into building and maintaining the trails that were raced on, and that we lucky Wellington mountainbikers get to ride whenever we like, so thanks to Ben and John from MPS for all their impressive hard work on the day and for all the hard yards they had to put in to make it all come together!

P.S. Some great pictures of the day are viewable here...
Posted by Oli at 8:30 PM

I rode the Makara Loop today for the first time in a long time today. I rode up Ngaio Gorge, through Johnsonville, then blasted down the Takarau Gorge to Makara Beach, then slowly struggled back up over Makara Hill to Revolution Bicycles in Northland for a while to regain my equilibrium/composure/breathing, then fanged down Glenmore and home around the Bays...very sore now, and enjoying a beer.

Back in the early 80s and right up to the late 90s this loop was a staple Saturday afternoon training circuit of my friends and I. I have fond memories of barging shoulders with Chris Taylor and Andy Bray, racing for primes with Henry Chlebowicz, attacking Antos Kowaleski and Bruce Stewart through the Paris-Roubaix gravel, racing the downhills against Wheels and Jonathan Neill, and simply riding with many, many other good friends...

I probably sound about 90 years old, but I couldn't help but reminisce about how the Loop has changed/is changing since the halcyon days of my youth - the Takarau Gorge is sealed (apart from the wee taster of olden days), all the pines have been logged, opening out the lower Gorge, the cool old macrocarpa tunnels on the way to the village have gone, and now they're widening all the roads in preparation for the wind turbines going in.

I know it's all for a good cause, and that eventually the trucks will be gone again, but I can't help but feel sad that this classic road loop is being irrevocably altered. We have too few rural style circuits around Wellington as it is. Oh well, that's progress, I suppose...

I still had fun and reveled in being able to escape the city for an hour or so...lovely. 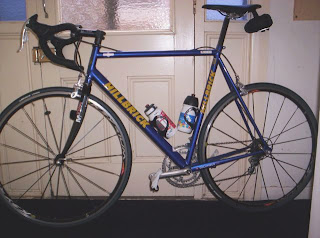 Hi there! It's been another full-on week at the shop - a couple of unfortunate Taupo crash victims to repair, and a big pile of munted mountainbikes to deal with. I managed to sneak in a couple of sly Road Ninja rides this week, and I can even glimpse a distant sight of some form...On the down side, I have been forced to euthanase my poor old Commodore, which many of you will know, and which has provided such sterling service to the Brooke-Whites for many a year now, so respect to The Beast please. 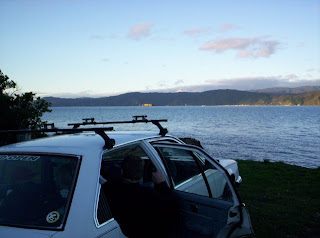 Good work to everyone who achieved their goal of a successful Taupo ride, but if it didn't go your way I'm sorry - there is always next year, as they say! I heard lots of great stories, so thanks to all who have let me know how they got on.

Hopefully all the mountainbikes I saw will be being ridden in the Makara Rally...It would be awesome to see a big turn out at either or both the Creek to Peak and Tour de Peak, both of which have a category for any level of rider. The money you spend goes directly back in to building and maintaining the fantastic world class trails we have the very good fortune to be able to ride here in Wellington.

Here a couple of shots of the superb John Randal and I winning the Vets duo section of the 2004 Creek to Peak - the only MTB race I am able to claim on my palmares! :-D 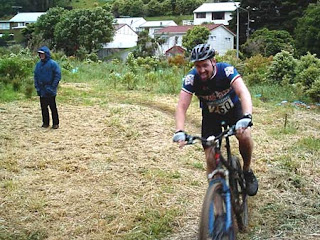 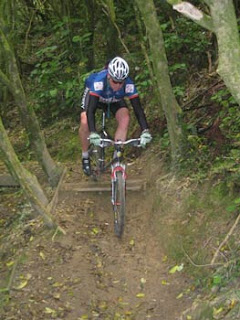 Mid-week I swapped the Ultegra gruppo off the Lynskey Flamer I've had on display, and substituted it with Dura-Ace for it's new owner. I'm sorry to see this one sold, as I liked looking at it in my shop all day! A truly individual and beautiful ride for some lucky bloke in the 09... 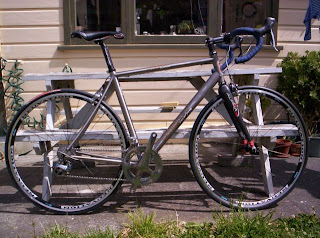 The Ultegra went on this stunning example of the sort of air-brush work that they can do at Lynskey... 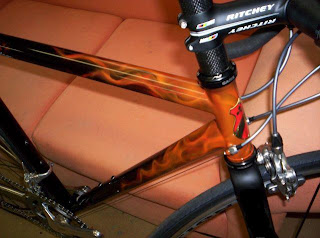 The working week came to a pleasant end, as Dave from Bike Fixation brought in a couple of fruity frames and a chainset from boutique US brand Sampson to fettle. The frames were a full carbon Sampson Diablo in a subtle red clear laquer, and a carbon/titanium Exalt that is just begging for a Campagnolo carbon gruppo. 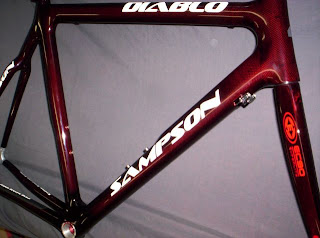 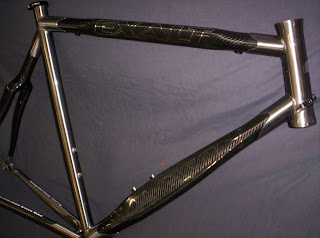 Here's the ISIS chainset Dave brought with him as well...another lovely bit of kit. 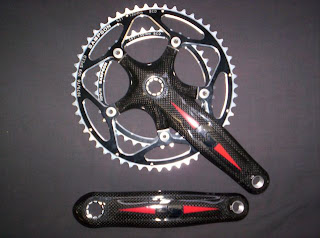 I look forward to seeing you at the Rally this weekend! CU, Oli
Posted by Oli at 10:45 PM