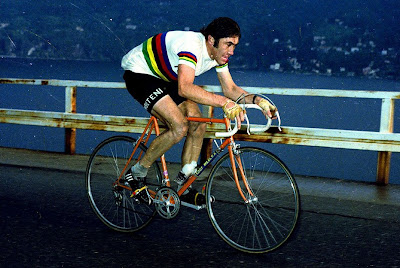 Whenever the now gets a bit full on and rides are hard to come by I tend to retreat back into the past for inspiration and emotional succour. Here then is my latest (and somewhat arbitrary) collection of photos scanned from my collection of magazines and pulled from various parts of the interweb. I have presented them in roughly chronological order, and with as much information as I have been able to glean. I hope you enjoy. 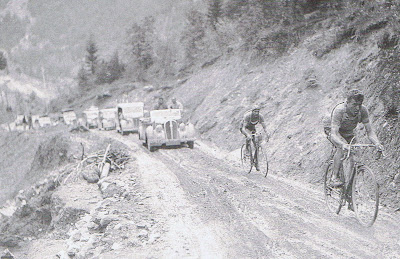 The road conditions of the early Tours were often diabolical, as can be seen here during the first post-war Tour in 1947 won by Frenchman Jean Robic. Pictured here are Louison Bobet of France (Tour winner 1953-'54-'55) leading Italian great Gino Bartali (winner 1938 and '48) up the awful slopes of the Col De La Croix de Fer. 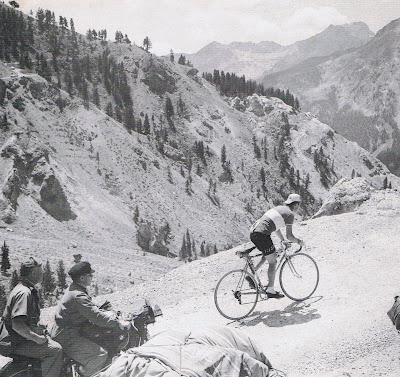 Luxembourg's first and only winner of the Tour to date was the "Angel of the Mountains" Charly Gaul in 1958. He is pictured here on the rock-strewn slopes of the Col d'Izoard in the '56 edition where he would finish only 13th, but convincingly take the mountains title. 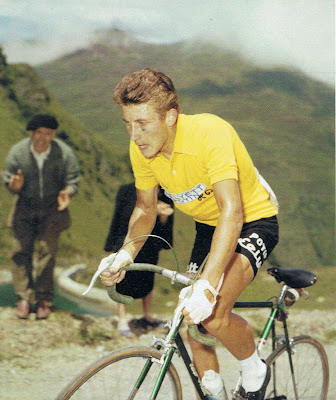 The first five-time winner of the Tour de France was French superstar Jacques Anquetil, seen here climbing in the Alps during his initial win in 1957. 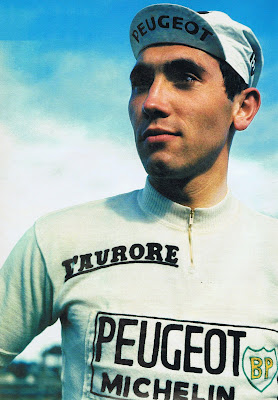 The Cannibal, Eddy Merckx, pictured in 1967 as his rise towards becoming the Greatest Cyclist Ever was really just getting started. 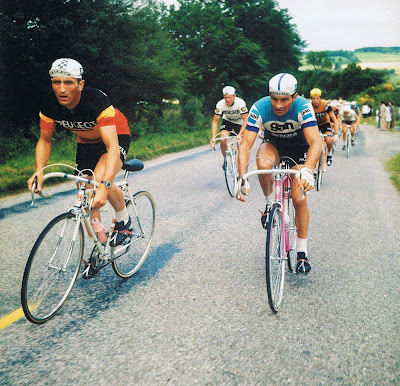 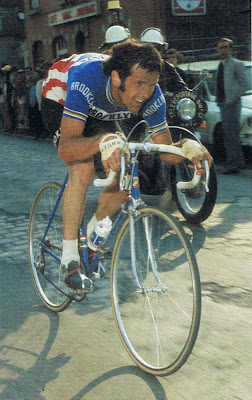 Belgian legend Roger de Vlaeminck rides typically hard in his inimitable cocked-wristed style on his way to victory in the 1975 Paris-Roubaix Classic. Known forever as Monsieur Paris-Roubaix, he still holds the record of 4 wins in this most arduous of races, and this was his third success. 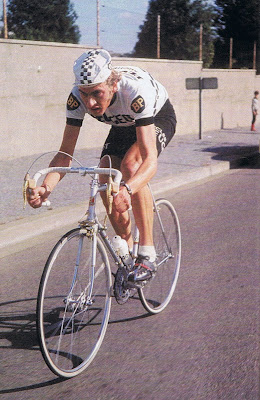 Belgian star Jean-Luc Vandenbroucke rides in the 1975 Gran Prix des Nations time trial won by Dutchman Roy Schuiten. I love the gold Mafac centrepull brakes and levers, and still wish I'd snapped up the pair we had in the Bicycle Village cabinet for years... 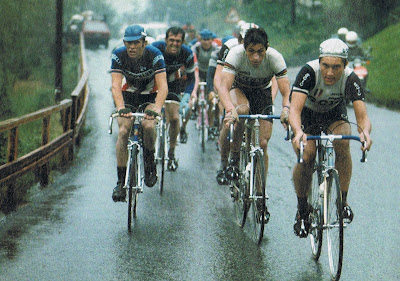 1977 World Champion Francesco Moser follows his Italian rival Guiseppe Saronni during that years Tour of Lombardy, held just a week after he had won the rainbow jersey in Venezuela. Belgian teammates Johan de Muynck and Roger de Vlaeminck follow, with eventual race winner Gibi Baronchelli just visible tucked in behind Moser. Known as "The Race of the Falling Leaves", due to its autumnal place in the racing calendar, this edition was run in typically foul conditions. 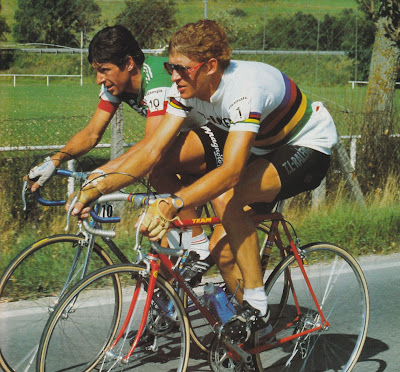 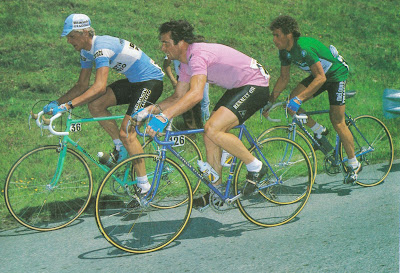 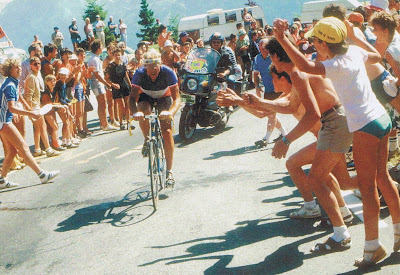 French Champion Laurent Fignon rides the 15th stage mountain time trial of the 1983 Tour de France to move within a minute of the yellow jersey being worn by his injured teammate Pascal Simon, who was struggling heroically but futilely with a broken collar bone. 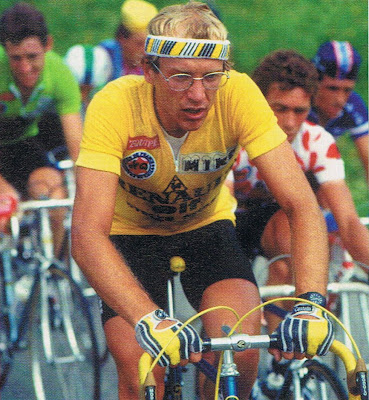 Fignon now wears the yellow jersey he would take that year to Paris, becoming at 22 the youngest Tour winner since Georges Speicher in 1933. He would also win the following years Tour. 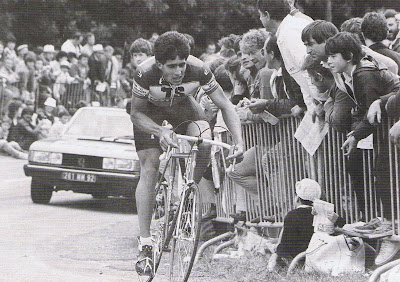 Future Spanish great Miguel Indurain gives it some wellie in a time trial during the 1985 Vuelta a España. In the early to mid 1990s Indurain would go on to become the first ever winner of five consecutive Tours de France, along with two Tours of Italy, a World Time Trial Championship and an Olympic TT gold. 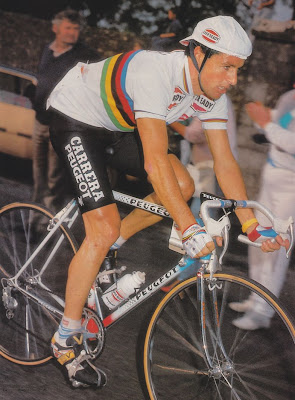 1987 World Road Race Champion Stephen Roche of Ireland rides in the Nissan Tour in his home country, finishing second behind compatriot the great Sean Kelly. The rainbow jersey put a stunning cap on a magnificent season for Roche in which he had already won the Giro and the Tour, becoming only the second rider ever to win the Triple Crown after the incomparable Eddy Merckx. Sadly a recurring knee injury would mean he'd never get near to scaling the same glorious heights again... 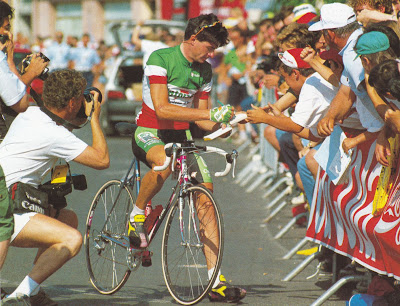 1991 Italian Champion Gianni Bugno signs autographs before a stage of that year's Tour in which he'd finish 2nd behind Indurain. The powerful all-rounder wouldn't ever win the Tour, but he would go on to win Worlds later in the year as well as the next, to add to his dominant 1990 Giro victory. 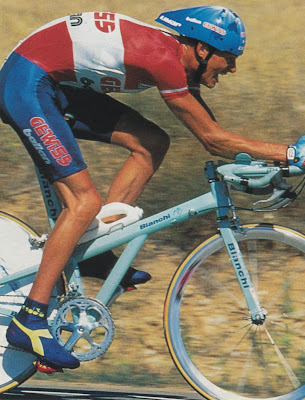 Danish National Champion Bjarne Riis rides a time trial during the Tour de France 1995. He would finish 3rd behind Miguel Indurain this year but go on to win in '96, crushing the hopes of the big Spaniard becoming the first six-time Tour winner in the process. 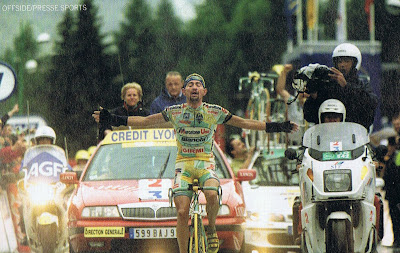 Marco Pantani (Italy) wins the stage and takes the Yellow Jersey atop the climb of Les Deux Alpes during the 1998 Tour de France after destroying previous year's winner Jan Ullrich on the Mighty Galabier... 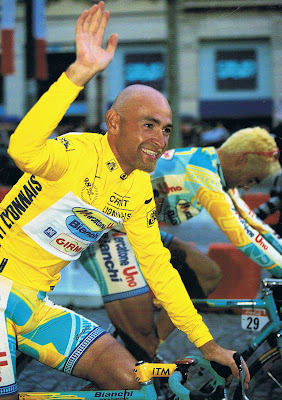 Pantani soaks in the adulation of the crowd on the Champs-Élysées after his victory in the turbulent 1998 Tour, completing a famous Giro-Tour double and becoming the first Italian to take the Tour since Felice Gimondi in 1965. 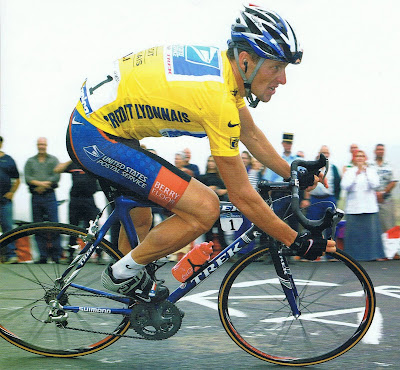 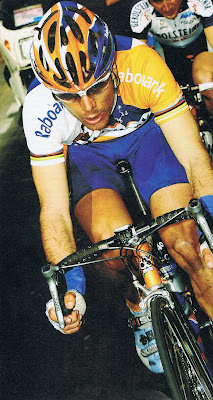 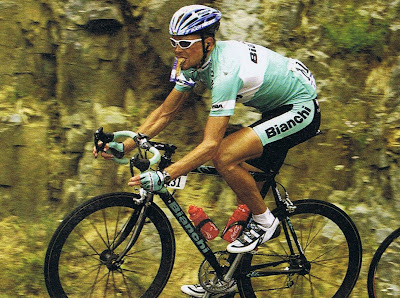 The first German winner of the Tour de France was the great Jan Ullrich in 1997. After the Pantani hiccup of '98 he was expected to go on to become the pre-eminent Tour rider of the times, but in 1999 he ran into a large roadblock known as Lance Armstrong who would go on to dominate the Tour until retiring after his 7th win 2005. Here Ullrich is pictured grabbing a snack during the 2003 Tour where he came a heart-breakingly close minute and two seconds away from finally beating the Texan... 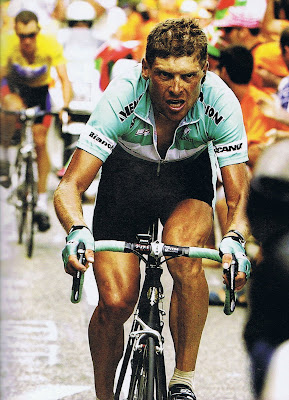 ...here Der Kaiser puts the hammer down and astoundingly drops The Boss on the climb of Ax Trois Domaines during that hard-fought 2003 Tour, with Armstrong powerless to respond in what would be another near-critical moment of his history equalling fifth Tour victory. 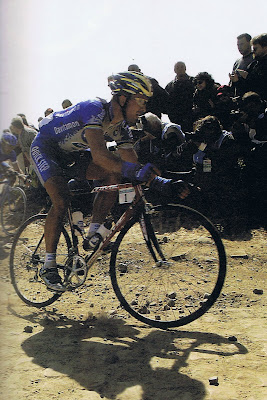 In 2003 the Lion of Flanders, Johan Museeuw, rides the terrible roads of Paris-Roubaix, in which he had held aloft the cobble trophy of winner three times (1996-'00-'02).

I'll finish off by going back in time for a postcard of a friend of mine in his heyday. This is New Zealander/Dutchman Tino Tabak readying himself for the 1973 season. Read Jonathan Kennett's gripping "Tino Tabak: Dreams and Demons of a New Zealand Cycling Legend" for more insight into this fascinating character who was a contemporary and feared competitor of Merckx et al. 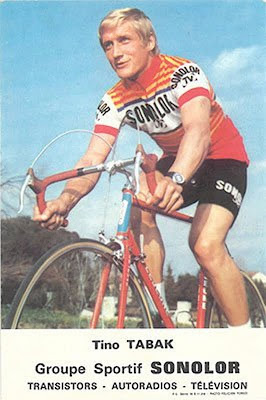 Please note that I have written several more Old Days posts - check the sidebar for the links.
Posted by Oli at 8:55 PM

Oli, did you see the interview with Tino? was on TV a year or so ago

I sure did, thanks. He did a radio interview with Kim Hill that was good also.

I appreciate that you taking the time to write this article , it has valuable information.

Cheers, Thomas! Glad you enjoyed it.

Thanks, Chris! Glad it was useful for you.