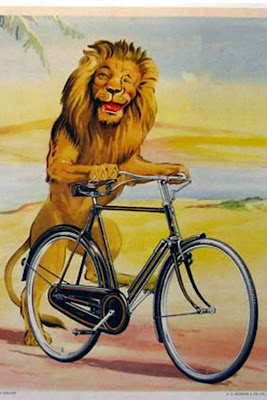 I'm not lion when I say that one of the unexpected, but most welcome, benefits of being a relentless blogger in the cycling milieu is that from time to time I get to exchange correspondence and photos with like-minded people from far-flung corners of the world; for example Wales, England, and Auckland. From the former I've been having a fascinating conversation about bicycles, and one in particular that I'll get to in a bit...

Barry has a clear passion for Campagnolo-equipped racing bikes, as witnessed by these fine examples from his collection. Firstly, this lovely de Vlaeminck-esque Gios Torino: 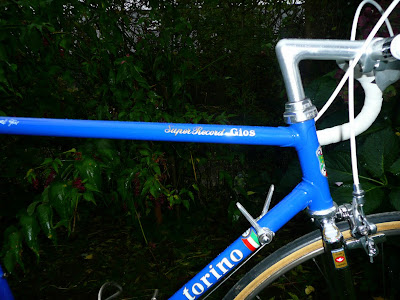 While these restored and re-painted machines are perhaps not fully period correct, they all nonetheless have a good blend of old and new components. 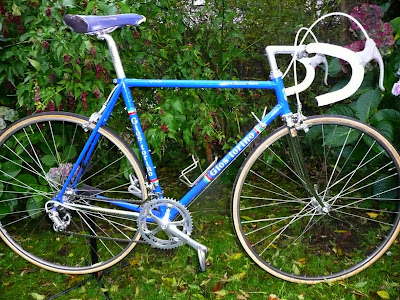 Also in his quiver Barry has this classy white Rossin. 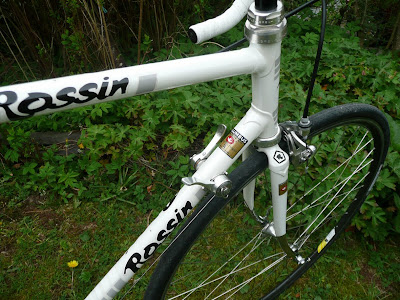 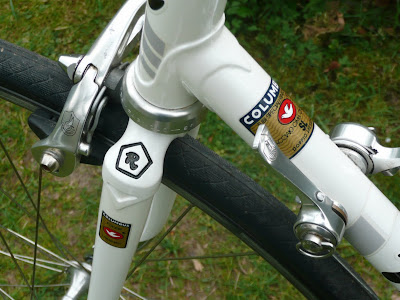 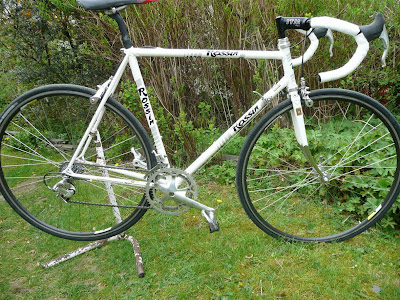 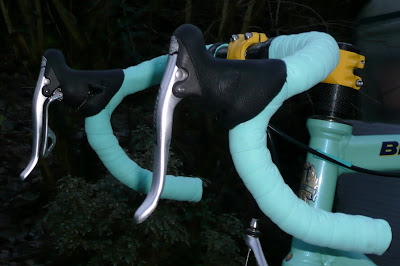 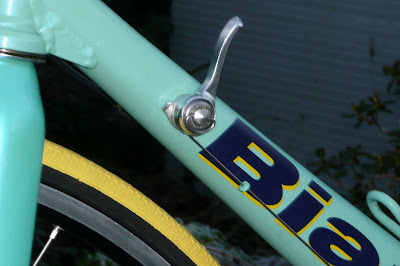 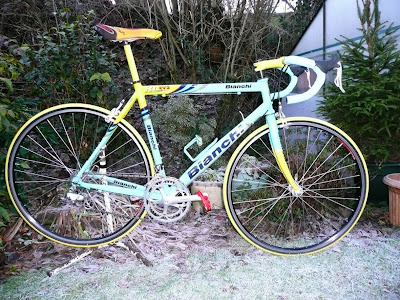 The reason Barry found my blog was from a picture I'd posted of Marco Pantani riding his Bianchi TT bike during his 1998 Tour de France victory, when he was doing an image search in advance of restoring his own example of these frames. From Barry posting some informative comments on the blog post in question (Old Days - Part Two) we moved to email for these great photos through the process of getting the bike rolling...

Here's the Pinarello-built frame after painting, before clear coating and while transfer placement is getting sorted. 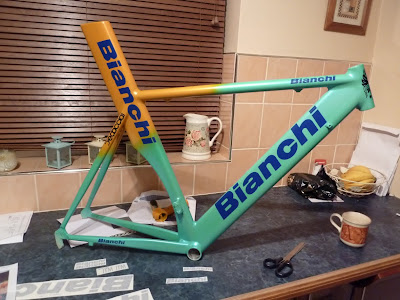 This is the expanding seatpost. 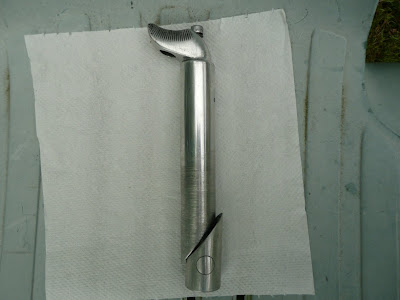 Here are the forks after painting, as well as the forks from Barry's EV2 which were used as a colour template. 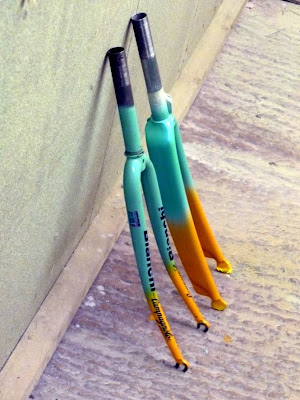 Starting to look really good in the middle of being built, and while positional stuff is being sussed. 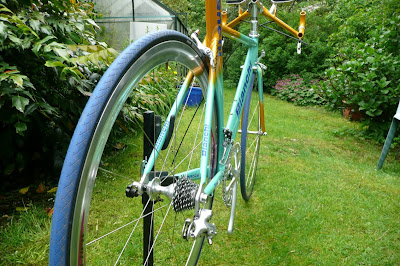 And done. Here's the authentically colour-coded ITM cockpit. I have one of these complex TT handlebar set-ups myself (in black, and thanks Jonty!) but haven't yet come up with a project this grouse to use it on! 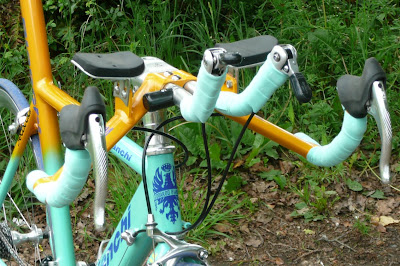 And here it is in full and glorious profile... 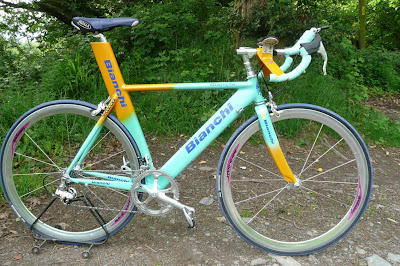 ...and joining the EV2 to complete Barry's brace of Pantani-inspired bicycles. Great stuff! 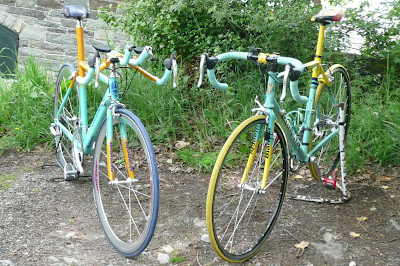 Finally, here is Barry looking fit, fast and pro while putting his Bianchi TT special through it's paces in a local time trial in Wales last weekend. Thanks for the pictures, the info and for the kind support from afar, Barry! 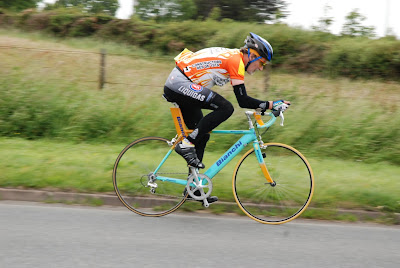 Some of you may have read one of my old posts I called The 39 Steps, in which I related building up a lovely Colnago Master in the famous candy red colour scheme of the Colnago that Guiseppe Saronni rode to victory in the 1982 Goodwood World Championships. Gavin in Auckland has been reading my blog, and he got in touch to show me his restored Colnago Super. He's clearly a dab hand with a can of spraypaint, and he has done an amazing job of restoring this old Super. 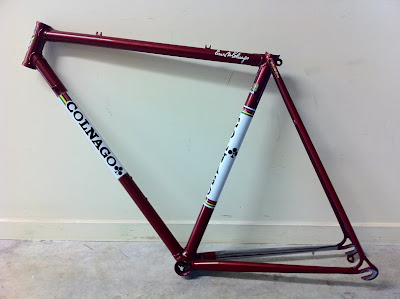 In the same vein as Barry's bikes (and mine, of course!) Gavin is using more modern parts to complete this classic frame. 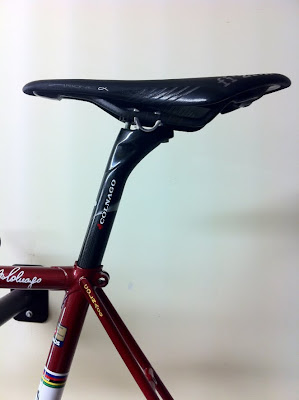 I'm a big believer in the lovely ride these old steel relics can provide when set up with the best of modern equipment, and it's always cool to use some older kit as well. To my mind early Shamals are still the most visually appealing deep-section wheels ever to come out of the Campagnolo factory. 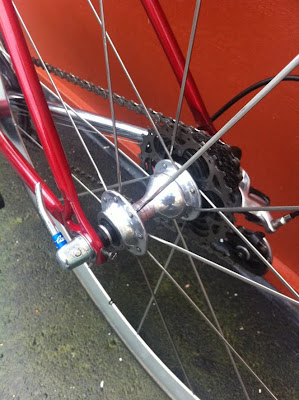 Here's Gavin's super Super completed, and with Shamals on... 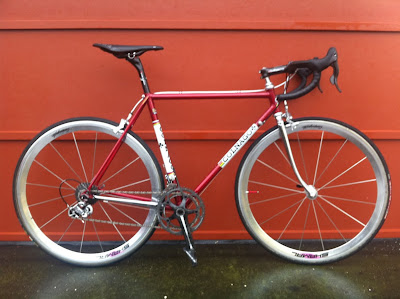 ...and with some wickedly fast Easton Tempest II carbon hoops for race day. Talking of carbon, Gavin tells me he also does carbon repairs to damaged frames so drop me a line if you want to be put in touch with him - judging by his paint skills his workmanship will be top shelf! 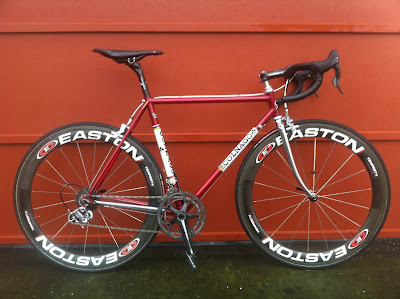 Finally, I've blogged my beloved old Chas King Prendero once or twice before... 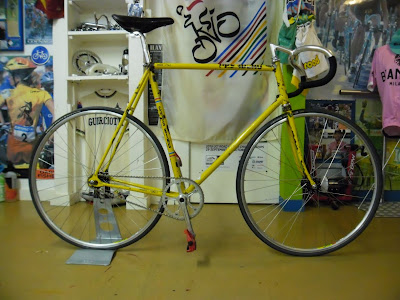 ...which elicited another set of pics from Auckland. In his accompanying email Paul told me it was my blog that inspired him to Buy Now rescue this battered and abused old machine from Trade Me for a cool $100, once he'd spied a Chas King logo in the photo illustrating the anonymous listing. 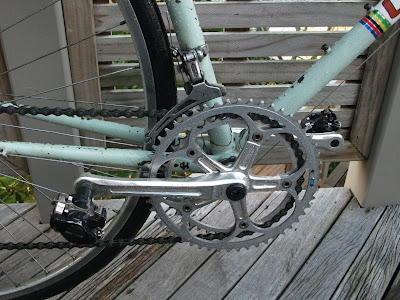 A mix of components includes a Shimano 600EX chainset, Suntour Cyclone derailleurs with non-indexed down-tube shifters and brakes from Campagnolo 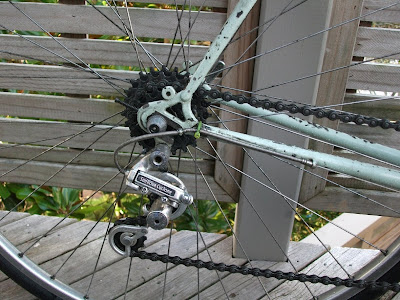 He cleaned the bike up and removed some extraneous bits and pieces, before sending it to his LBS Biketech for some finishing touches. 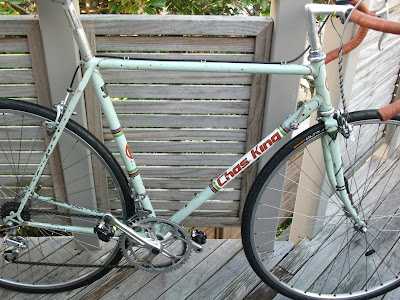 While musing upon this very blog during the week I was surprised and delighted to receive another email from Buxton in England, that came from a Danny King. Yes, Danny is the Grandson of the late Charles, or Chas, King! He had been Googling his Grandfather's name searching for bikes he had built when he found mine. Danny tells me,

"You are right that Chas was a plumber who emigrated from south London to New Zealand in 1952, settling in New Lynn, Auckland. He'd been keen cyclist for many years and represented Great Britain at the 1936 Olympics in Berlin, winning a Bronze medal in the Team Pursuit.

He carried on cycling all his life both in NZ and over here in the UK for holidays, remaining a member of the CTC, and as you say built frames on a small scale. It's great that some are still about!"

I'm super proud to have paid some small tribute to this Legend of Cycle Sport, and I'm also delighted to be able to show him Paul's other example of his Grandfather's superb workmanship... 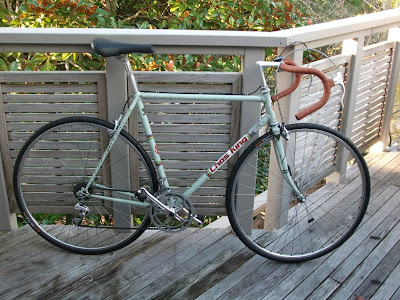 Thanks to Danny, Paul, Gavin and Barry for taking the time to get in touch and share, and thanks as always to you for reading. Cheers, Oli
Posted by Oli at 2:34 PM 2 comments: