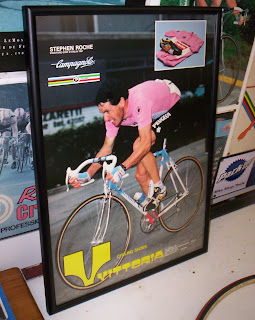 Further delving into my ridiculously large collection of old magazines has thrown up some more great photos, these ones mostly from the early issues of English monthly Procycling. It's always good to remember that these old mags aren't just props, but cool hard copy reminders of fun times past. There's no real rhyme or reason for me picking the specific pictures, just that they grabbed me somehow as I flicked through the pages, so I hope you like them, and apologies to those of you who have already seen these on my Facebook page...

Here's Fausto Coppi climbing in the Alps on his way to victory in the 1949 Tour de France. Il Campionissimo won the Tour again in 1952, along with every other big race going during his career. 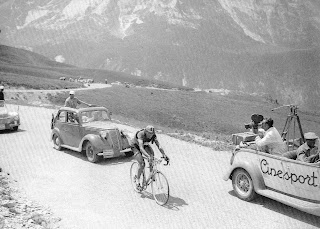 The legendary character Raphaël Géminiani in the Yellow Jersey rides alongside his French Team captain Louison Bobet during the 1958 Tour de France, won in the end by the "Angel of Luxembourg" Charly Gaul, with the fading powers of former triple winner Bobet only capable of letting him end up in 7th. 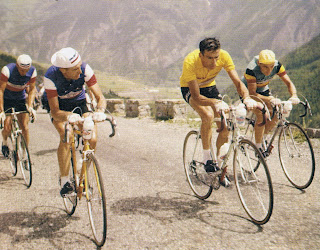 The late Peter Post (who just passed away on January 14th) rides an unidentified race in 1965, the year he won Paris-Roubaix in what is still the fastest ever time of an incredible 45.129 km/h for the 265 km. 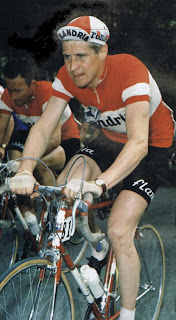 Eddy Merckx on his way to his first of seven victories(!) in the great Milan-San Remo classic, 1966. Shots of him in his Peugeot kit aren't thick on the ground, but this is a goodie. 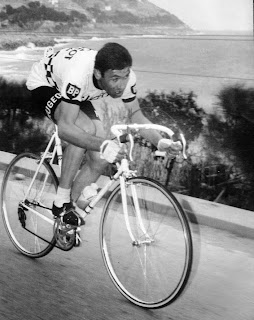 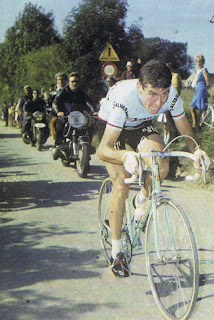 Gimondi rides in the Maglia Rosa during the 1967 Giro d'Italia, flanked by Jacques Anquetil and Eddy Merckx. Gimondi rode his Bianchi to victory in this Giro, as well as the '69 and '76 editions. Add these to his 1965 Tour de France and '68 Vuelta a España wins, his 1973 World Championship and several Classics and you begin to get an idea of how good this classy rider was. 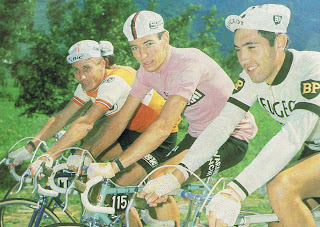 Felice Gimondi again, this time riding alongside Jean Stablinski during the 1967 Tour de France, which was run along national Team lines and won by France's Roger Pingeon. 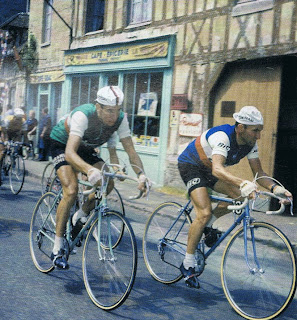 Eddy Merckx rides through the hellish heat of the cauldron that is the Mont Ventoux during his second Tour de France win, 1970. 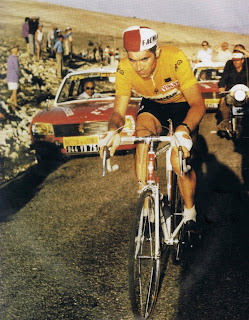 Roger de Vlaeminck attacking in his inimitable style, 1975. Not sure of the race, sorry, but I don't believe there's any such thing as too many pictures of this Belgian hardman who will be forever known as Monsieur Paris-Roubaix for his incredible four victories in the Hell of the North.

1976 World Champion Freddy Maertens being chased by Didi Thurau in the 1977 Amstel Gold classic, trying unsuccessfully to defend his title from the previous year. Maertens was a mercurial talent who sadly only really had two good years on his palmares, '76 and his "comeback" '81 season. 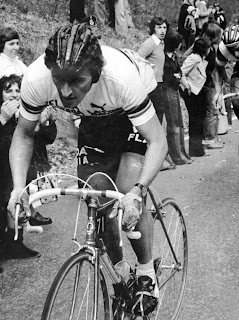 Francesco Moser piles on the pressure attempting to shell French Champion Bernard Hinault and the dogged Willy Panizza during the 1978 Tour of Lombardy - the string would snap and Moser would go on to win the Race of the Falling Leaves for the second time of his illustrious career. 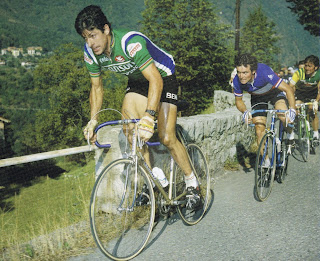 Bernard Hinault won Paris-Roubaix in 1981 wearing the colours of World Champion. He did it despite regarding the race as a foolish anachronism, and after a grand total of 8 - yes, 8 - crashes on the day, including being decked by a loose poodle! 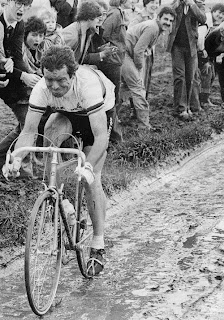 Classy Irishman Stephen Roche rides ahead of the phenomenal Greg LeMond on the Aubisque during the 1985 Tour de France. Roche won the stage but the Tour was won by LeMond's team mate Bernard Hinault, with Roche finishing 3rd on GC behind Hinault and LeMond. 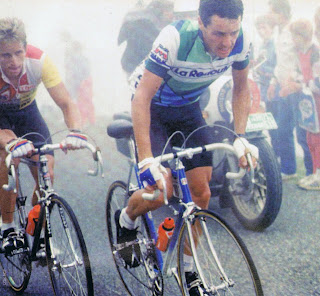 The Badger riding the Colorado Worlds, 1986. For me, no one epitomises the toughness of the pro cyclist better than Bernard Hinault. This Championship, the first on US soil, was won by Italian Moreno Argentin. 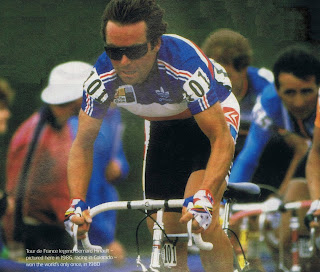 An unusual and very cool perspective of a descending Gianni Bugno, taken during the Tour de France 1992. Bugno would win his second consecutive Alpe d'Huez stage and go on to finish third overall in Paris behind Claudio Chiappucci and final victor Miguel Indurain. 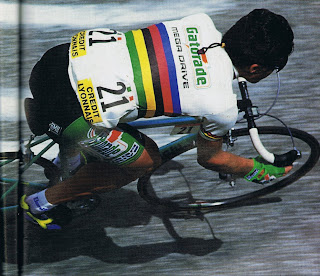 A Mapei domestique and Italian Champion Gianni Bugno set the tempo on a climb in the 1996 Giro d'Italia. Spaniard Abraham Olano in pink behind Bugno would go on to finish third behind Russia's Pavel Tonkov. Thanks to my friend Glenn for the unpaid help on this one. 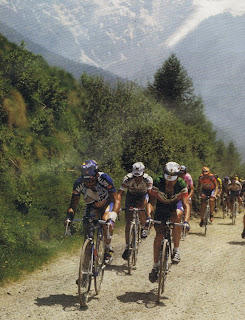 A random shot I stumbled upon of New Zealander Chris Jenner during early-season training in 1999. Hailing from the Hutt Valley, Chris used to terrorise the Wellington road race scene before his departure to France to successfully follow the pro dream. Despite being licensed as a Frenchman at the time, he is still the only New Zealander to have won a stage of the Tour de France, being a part of the Credit Agricole squad that won the Team Time Trial of the 2001 Tour. 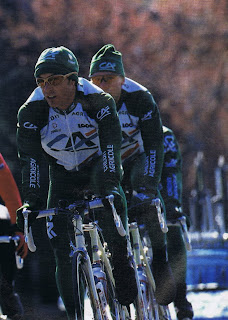 Italian Champion Andrea Tafi punches through the choking dust as he stomps to victory in the 1999 Paris-Roubaix. He wanted to emulate his hero Moser by winning in the tricolore, and he did. 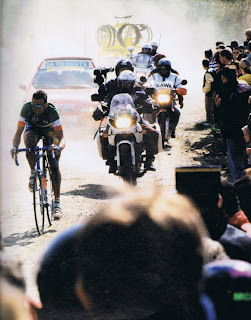 Well, that covers about half my pile of Procyclings - I'll see what else I can come up with in the second half. Until then, thanks for reading.

Please note that I have written several more Old Days posts - check the sidebar for the links.