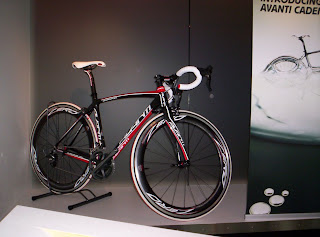 Big gap between posts, sorry! There's been lots going on in my life, and most of it non-bike related so not really blogable (is that even a word?). Hopefully this post will be the start of getting back on track as the dust (mud?) settles...

Last week was quite a busy one. First I finished off the 1997 Look frame I was building up for my friend Doug. He had been looking around for a nice pair of used wheels and found a cool pair of Tristan built Record/Sapim/Niobium wheels that enabled me to finally get cracking and nail the build. It turned out really nice. I like the Campagnolo Veloce kit - it's built and feels a hell of a lot better than it's pricepoint would suggest it would... 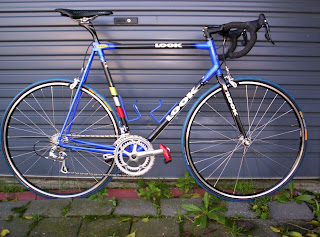 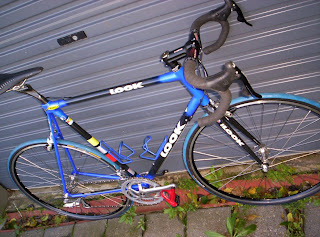 Doug asked me to revive his lovely old Guerciotti at the same time to be retained as his wet weather/training bike. These lovely frames were never reknowned for their robust paintjobs, so at some stage Ross Bee had done some of his awesome work on it. I was in the process of cleaning the frame up in advance of fettling the bike when I unfortunately discovered the right-hand chainstay was cracked around almost it's full circumference, so sadly it looks as if the parts will have to be transferred onto a new frame of some description...It's very sad for me to have to be the bearer of bad tidings in a situation like this. I always feel like the doctor telling a family their relative didn't make it off the operating table. :( 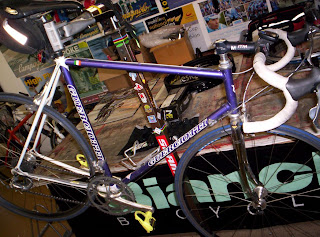 Once the Look was completed and in the rack I took this picture. Sometimes the best thing about what I do is just being surrounded by the cool bikes and memorabilia, and I just thought this was a cool aspect of my shop. 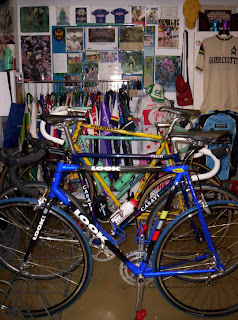 Talking of memorabilia, most of you would know I have a growing collection of signed jerseys including ones signed by Susy Pryde, Sarah Ulmer, Phil Anderson, Suzanne Ljungskog, Julian Absalon and many others. The latest one to find it's way to me collection was the result of some extreme generosity on the part of my friends Paul Larkin and Tim Wilding.

This jersey was up for auction by the Rotorua Singlespeed Society (of which I'm a proud member) after a fund-raising Poker Run in Vegas to get some funds together to get NZ Singlespeed Champions Garth Weinberg and Annika Smail to the World Champs in the USA. I had put in an online absentee bid for it for $200 but it quickly became apparent to Paul and Tim that it was going to go for more than that so they put their heads and wallets together and bidded for it, winning it with a $280 bid! Then they kindly presented it to me for the shop, so thanks heaps boys. Two good causes at one fell swoop! :D 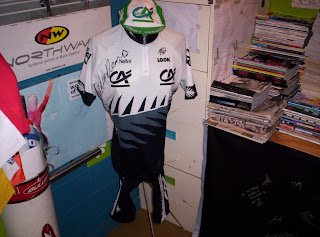 On the Wednesday night Paul and I went along to the first of this years trade product launches. Marleen Wholesalers do many products, but this was mainly the BBB retail systems seminar so not really applicable to my business model. Still interesting, although I would have been much more keen on seeing more of their tools like this torque wrench set I just scored off them. While not quite as precise as my Park TW-1 and TW-2, it works great and it's definitely handy, as well as being more portable for travelling work. 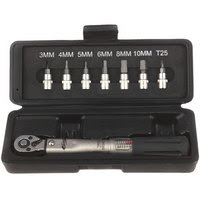 Also we heard a bit about Maxxis tyres...

And a brief rundown on the latest Park Tools
...I'm a huge fan of Park Tools, and my tool selection is mainly based around their fine products.

Thursday night I was granted another leave pass to go on my first night ride in ages - in fact since before my son Bodhi was born, and he's 5 1/2!! In preparation for my Taupo Day/Nighter ride with Delmaine, I bought myself a NiteFlux Li/Ion set of lights, and was desperate to try them out. With an LED headlamp and a halogen handlebar light I was sorted for a blast, and we made the most of it. Up Koru and Sally Alley, then up the Snakecharmer to the Peak, where cold wind and rain meant our pause was brief, then a wicked blast down Aratihi, up Missing Link, then down Ridgeline Extension and finally the super swoopy fun Lazy Fern to finish.

Despite this being about my second ride since June, I had an absolute blast. The lights make a ride you know really well completely different, and the feelings of speed as you hurtle through the regenerating native bush are truly uplifting - I couldn't wipe the grin off my face for days! 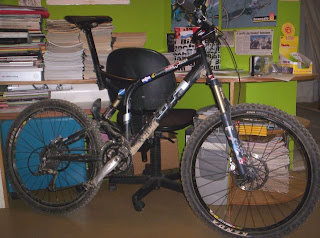 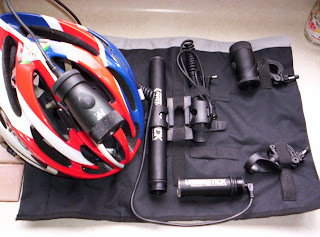 After a good night's sleep, I had to get up at the crack of dawn on Friday for an exciting and unforeseen mission. Tama Easton from Vorb asked me to be Vorb's representative at the media launch for Avanti's new Cadent and Quantum roadbikes - naturally, I leaped at the chance for a media junket! At Sheppard Industries (Avanti) expense I was flown up to Auckland where, along with a select few other media reps, I was given a tour of Sheppards flash new facility, along with a rundown and test ride of these cool new bikes. 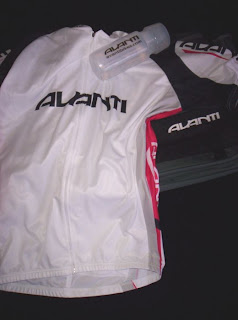 Unfortunately, weeks of illness along with the effort of my nightride had killed any semblance of form my poorly neglected legs might have had, so I didn't really do the beautiful bikes justice, but I think got a pretty good story out of it: 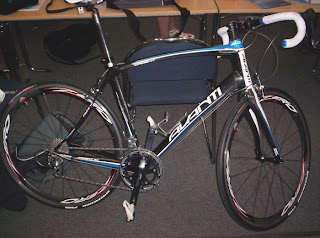 My Quantum...I want one so bad it hurts! 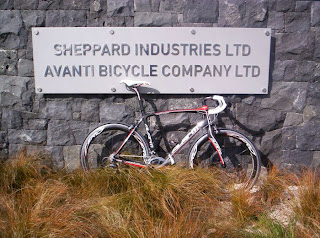 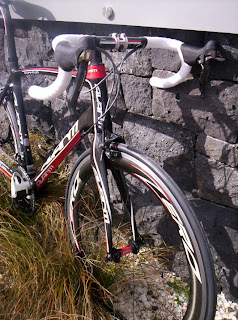 Along with these bikes, we got to see many others including Hayden (Hash) Godfrey's World Omnium Championship winning Pista. 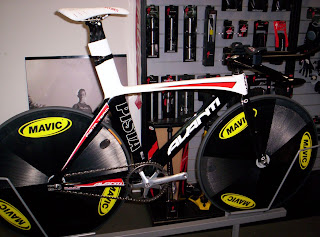 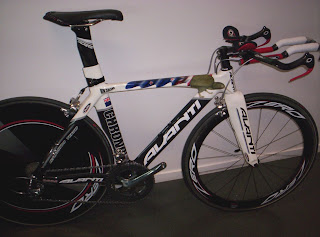 I really enjoyed the whole experience - it was cool to meet the Sheppards/Avanti team, along with the other media folks. Even the ride was fun, although I wish I wasn't such riding like such a sack of s**t! :D Hopefully I get more chances to do this kind of thing, as it nicely ties up two of my great passions - bikes and writing.

This week was a lot less full-on, but I built up this Quintana Roo Kilo for Dave at Bike Fixation, who I am now allowed to reveal is the new NZ distributor of Litespeed and QR bikes.

The Kilo is a well-crafted and very affordable tri/TT bike, so get in touch with Dave if you have any thoughts of adding such a bike to your quiver... 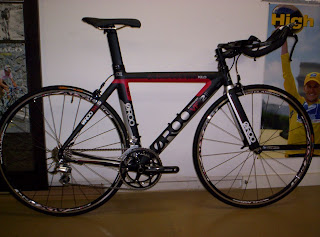 On Wednesday evening, I went along to the SRAM product launch, where we were able to stuff our faces with beer and pizza while being shown fruity bits like the new Hammerschmidt front derailleur free shifting system and Sram's latest prototype road wheels built with the resources of their recently acquired Zipp factory. No pictures allowed though, sorry. Great to catch up with my friend Rob Eva, SRAM's public face, who keeps exhorting me to make it over to Aussie for the MTB World Cup and World Championships being held at Mt Stromlo in Canberra - I'm working on it, buddy! 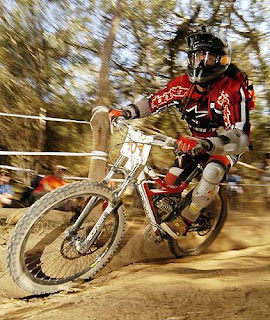 Also got to have another play with the lovely SRAM Red kit - I never get tired of fondling fruity bike bling! 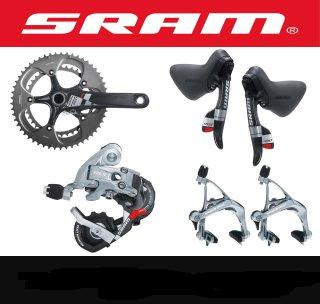 Now for some randomage. First up I just wanted to post this pic up of South African Olympian, and lovely woman, Cherise Taylor. I ripped this shamelessly from Facebook when it was pointed out to me, as there is an old fat bike mechanic I know lurking in the background... 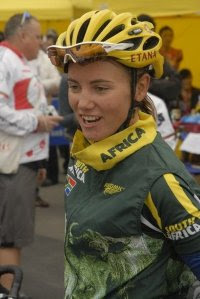 Next is this great photo of two of my Roadworks star athletes about to start Karapoti. John Randal and his beautiful daughter Kaitlyn went on to smash the tandem record for the Karapoti Challenge. It's so awesome to see a father and daughter so involved in each others lives - it's inspirational to me. 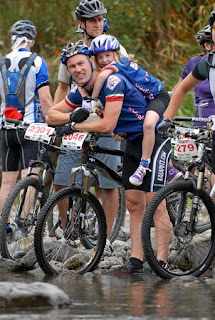 Lastly, I was sorting out a bunch of old pictures in my shop yesterday, when I stumbled over these old Bianchi ads that my good friend the late Sam Raphael had amended in his unique and humorous way. I made a digital copy of the originals that he cleverly made using black insulation tape and twink, and I thought you might get a chuckle out of them - I certainly did!

Sam at "work" at Cycle Services 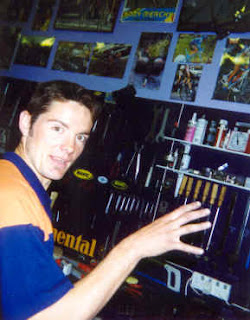 Slow down Moreno, you won! 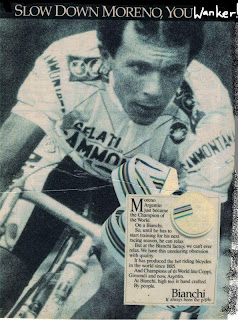 He builds 7 racing bicycles a year. We think he's overworked. 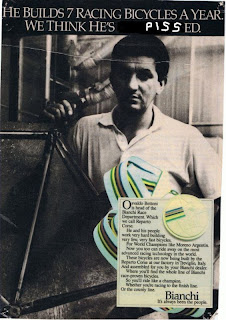 I referred earlier to the Taupo Day/Nighter. I was going to be part of a sifty team enjoying this event, but due to some unforeseen family circumstances I have had to pull the pin on doing this. I'm disappointed, but quite sure the Delmaine guys will have a blast anyway. Best of luck!

Well that's about it for now, except to say I hope you're all enjoying the Olympics - I certainly am, and am also really enjoying watching some of the athletes I've worked with in the last few years competing in the cycling events. It's the first time I've ever watched the Games with some actual personal stake in the results, so best of luck to all my friends taking part! I'm also receiving hilarious and sometimes inappropriate texts from my good friend Dave over in Beijing, so that's bringing it to life for me as well... :D

Obviously I am completely compromised, but I reckon those Veloce & Centaur groupsets are hard to beat.
For 09 we're offering Centaur in full shiny aluminium, plus a carbon group for the modernists.
Coming soon.