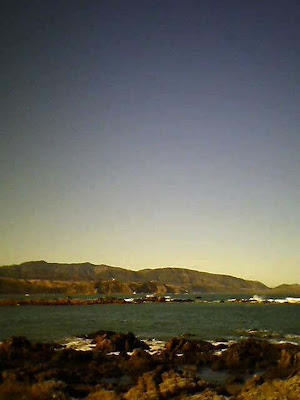 Just like Eddy Merckx did in his first ever road race, I finished 6th in my debut event; a handicap race from Miramar Wharf around the Bays to Seatoun and back. After that auspicious start to my racing career I found our results differed slightly, as The Cannibal went on to win nearly every Classic and Tour going whereas I pretty much didn't...

Despite doing many more races over the years that one is indelibly etched on my mind. I remember well the terrifying speed which my handicap group took off with that day, I remember the feeling of realising I had found the rhythm of the group and was actually lapping through strongly, and I clearly remember approaching the finish line and Alan McLay telling me to SPRINT NOW BOY! - I did and took the sprint from my group. The feeling of coming over the line first (even though I knew I hadn't actually won the race) was an indescribable pleasure - I was hooked on bike racing from that point on. 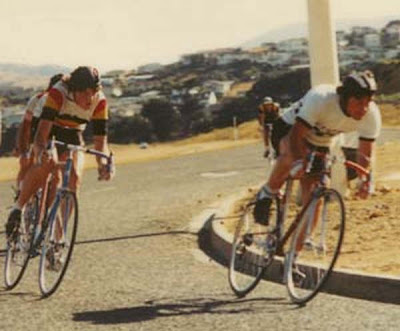 Even though my passion for racing is really only as a spectator these days, I still recall that feeling so well that sometimes, just sometimes, I will fantasise on a ride that I'm still that young bike racer who truly believed the Tour ride was only a matter of time...

One such ride happened to be on my birthday, and the Gods of Cycling were smiling on me by gifting me one of those fantasy days with no wind and warm sunlight where the flab is forgotten and the legs don't seem to hurt.

As I approached the long gone finish line of that fondly remembered first race I whacked it into the Big Dog and opened up my 60kph sprint, taking a Glorious Victory over Hinault, De Vlaeminck, and Maertens. The fact that I was probably barely hitting 35kph and my Big Dog is more of a Schnauser are utterly irrelevant when there was no one else around to compare speed to or who would have the temerity to actually beat me! 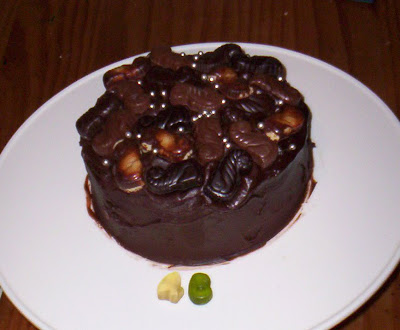 My day had begun with a lovely morning with my family, followed by a coffee at Fidels with Tim Wilding. Then I went into the shop and I got as much work out of the way as I could, before deciding I absolutely wouldn't miss out on a ride on this of all days. I changed into my slightly too snug superhero suit, jumped aboard my Bianchi and headed out the door. I headed south through Island Bay, then east around the South Coast to do an anti-clockwise loop.

As a kid growing up in Wellington from the age of four, it took a bicycle ride at sixteen to open up the Miramar Peninsula and South Coast to me. As my Mum couldn't drive and my Dad was very much an urbanite, the old Sunday drive didn't exist for us and I was utterly oblivious to the existence of these roads. Until the slightly traumatic ride I talk about in my eulogy to Roland I don't think I'd even really thought of riding around there, but by the time I'd finally dipped my toe clips in the racing scene it was rapidly becoming a second home to me... 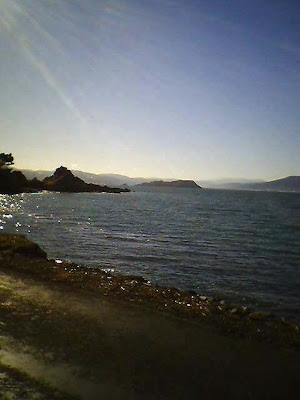 Of course in the intervening thirty years I've since ridden around the Bays a million times, and ever since those first laps I have always found the South Coast to be a very soulful place. The happy memories of that first race are sweet, but these roads on which I've also taken countless other formative rides are also my favourite place to escape the world and just let the wheels of my mind turn - it's amazing how a bike ride can lend clarity to thought just through the simple action of pedalling. Not to mention that the whole Bays Loop is just so visually breathtaking I feel a need to appreciate its unintentional artistry as often as I possibly can... 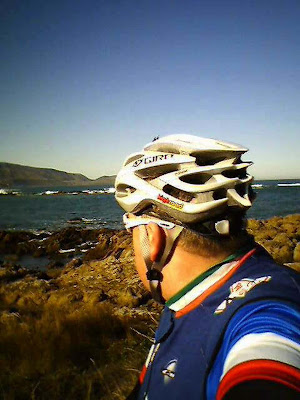 After my Great Imaginary Victory I wobbled slowly along Cobham Drive trying desperately to get my breath under control and my heartrate back down, before parking up in the sun under the Zephyrometer for a moment or two before heading back to work... 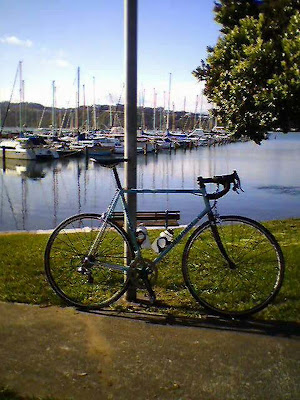 While I'd been riding around imagining my wheels were passing over the historic roads of bike racing, my friend Mike's wheels actually were. A few weeks ago I packed up his Condor for a trip to Europe. He took some classic shots which I've taken the liberty of ripping off his Friendster account...

The Condor being unpacked in Morzine. 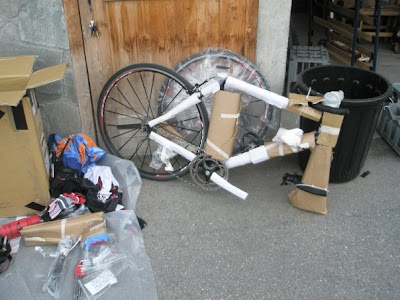 I was rapt to hear there'd been no damage inflicted to this cool bike either leaving or returning to NZ despite the best efforts of the world's baggage handlers... 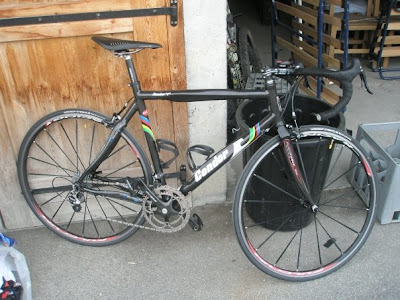 Mike warming up with a gentle spin around Lake Geneva. 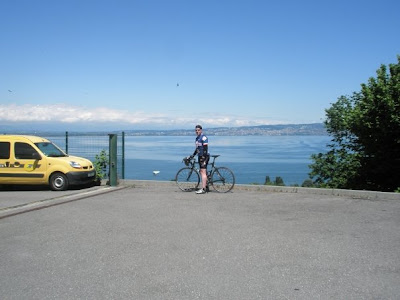 Morzine is a gateway to many of the Legendary Climbs of the Tour de France. Among other climbs Mike rode up Avoriaz... 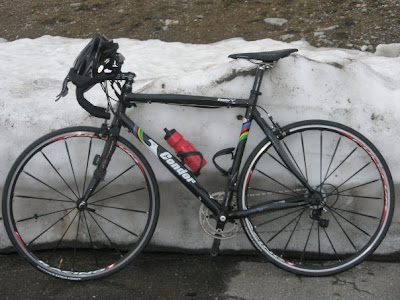 ...and he left my mark on the Joux-Plane as inspiration to future generations of climber. 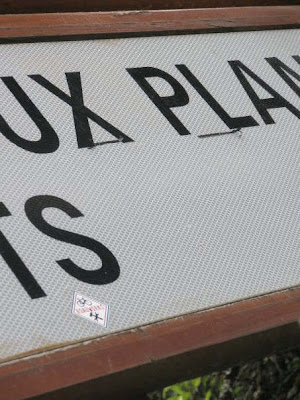 The Holy Grail of climbs for most roadies is the mythical Alpe d'Huez, and Mike rode it on his last day. Each of the 21 hairpin turns that take this 14km climb up to over 1800 metres is named for a previous winner of a stage up there - such famous names as Coppi, Armstrong, Bugno, Hampsten and and last year's winner Carlos Sastre have won this iconic and Tour defining climb. 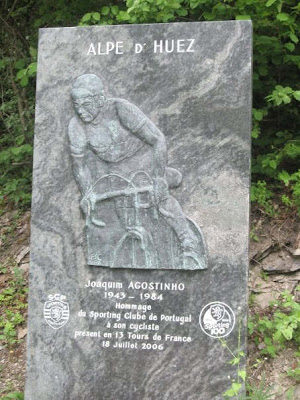 ...and the great Bernard Hinault's one at Corner 11. 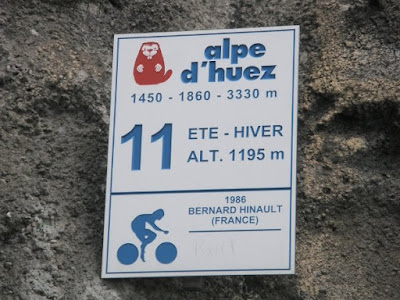 Mike finished his ferocious assault on l'Alpe with an equally ferocious attack on a very well deserved Coke. I like the casual placement of the eponymous jersey too...Good stuff, mate! 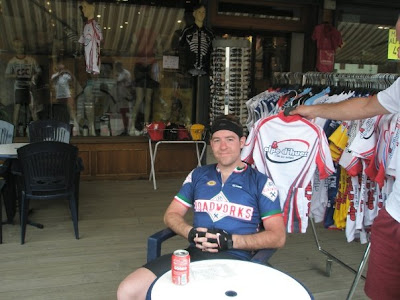 While still on the international tip, I haven't had much news from the Jazz Apples to pass on but I know they're heading into the Liberty Classic in Philadelphia tonight our time, so I want to wish them the very best of luck.

I know Ruth Corset has some stomping form after she got a fine 4th place in the Montreal round of the Women's World Cup behind winner Emma Pooley. Ruth was on National duty for Australia in that race, but rejoins the Jazz Apples for what is widely regarded as the premier North American one day road race. 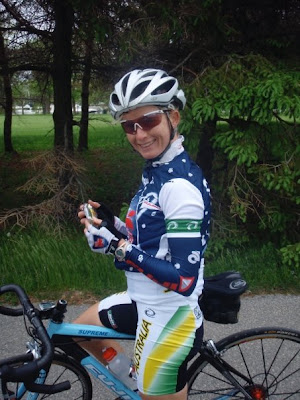 Despite the week being shortened by the Queen's Birthday holiday, as well as the Oli Birthday one of course, I still managed to get through some work. I'm sure I did more than just two jobs, but I must have been so busy I neglected to take many pics... 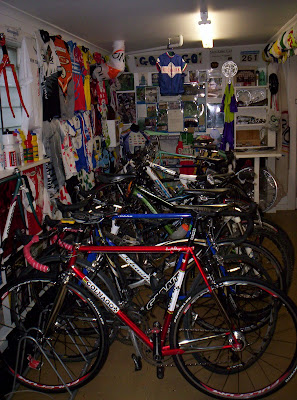 I serviced my good friend (and best dentist in Wellington!) Tony's Giant TCR. It needed a new drivetrain and cables, as well as a bearing in the rear hub - now it's in great shape. 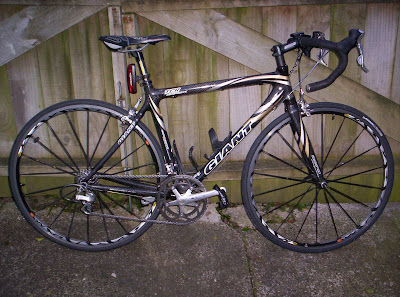 I also fitted the two pairs of wheels I built Martin to his cool Schwinn Peloton. This Reynolds 853 frame was repainted by the late Ross Bee. Martin's Ksyriums are getting on a bit, so he wanted to build up some wheels that better suited the character of this machine. A pair of 2.91kg (complete with tyres, cassette and q/r) 32 hole Ultegra training wheels... 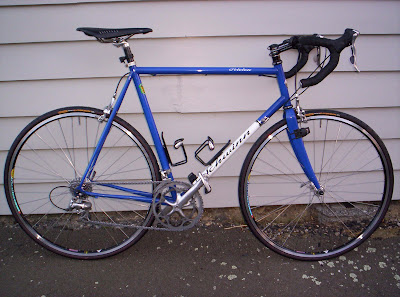 ...and a pair of 2.39 kg complete Dura-Ace 28 hole race wheels were fitted, each pair set up to mesh perfectly with the gears and brakes without adjustment, and with a noticeable weight loss between both wheelsets. 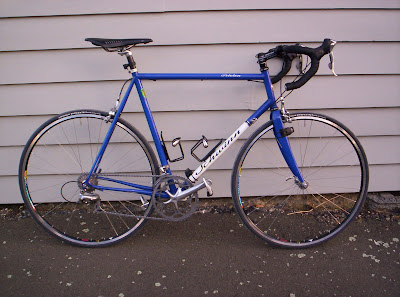 On Friday I added a pair of FSA Wing Pro compact handlebars to this lovely bicycle. 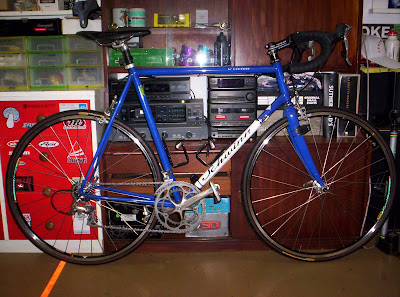 During the week I was lucky enough to be able to grab several other opportunities to ride. On Tuesday morning I had to deliver a bike to a client and pick up some rims of Jonty at Revolution Bicycles, so I combined those missions with a great fun solo MTB ride up Makara Peak. I parked at Karori Park and headed up St Albans, Rimu, AMP Connector, down SWIGG and Starfish, back up Koru and then an absolutely awesome blast down the delightfully flowy Lazy Fern. 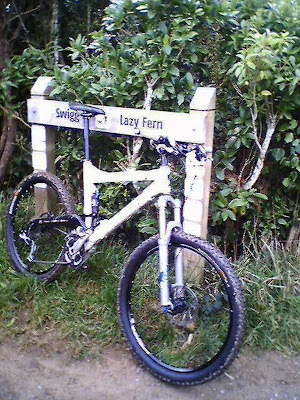 After the week was done I took advantage of yet another cracker of a Wellington winter's day to head out with my friend Alex for a ride on Saturday afternoon. We drove up to Standen Street in Karori, parked up, then meandered through the back streets to Karori Park. A bit of a bike push followed as we headed up the old DH Nationals course and onto Wahine. As we headed up the first switchbacks we were caught by the esteemed Simon Kennett and David Drake, who were finishing off a good loop of trails with a run down the Cemetery Trail - it was nice to bump into them.

From there Al and I wandered along Skyline, dodging cow poo, cows and bovine walkers until we too reached the turn off that took us down to the Cemetery Trail.

We fully had the flow on, so we took full advantage of the ideal conditions and had a fantastic run down this cool Trail of Many Flavours.

Al pinning the fast open part of CT near the top... 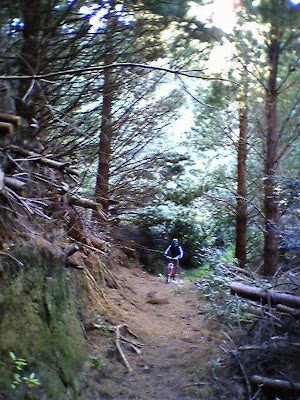 ...and navigating one of the little ups near the end of this sweet singletrack. 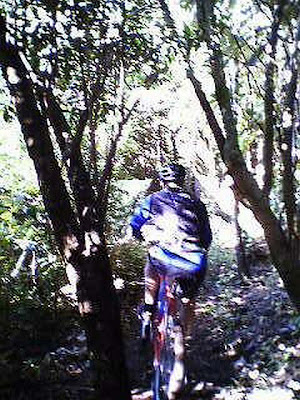 We ended up back at the car both feeling like we had had a really great ride - Al even said one of the best in recent times, and I certainly don't disagree with him. Like my birthday road ride it was serene, inspiring and interspersed with enough action to make me feel truly alive. It certainly wasn't a long ride by some standards, but on top of the three others I managed over the week it sure felt like a good effort, and the payback for these efforts can be immeasurable. Sometimes cycling feels like such a gift, and this week I was lucky enough to have been given many gifts...

I'm pretty sure I unpacked my dh bike in that exact same spot in Morzine. Eira has seen its fair share of Kiwis over the last couple of years!

Great Blog oli, what a wonderful day you had for your birthday, you make me very homesick for good old Welly.