A couple of weeks ago David from Bike Fixation brought me some boxes containing some Campagnolo parts and what is the first carbon Litespeed Archon frame in Australasia, only released to the media and public at Eurobike in early September.

Dave had me build it up as a display demo bike to show around the country. It's a great honour for me to be tasked with assembling it so I thought it deserved it's own blog entry, plus it's been a while since I did a dedicated build log...

As I showed last week, the first thing I do is lay the bike out to ensure no parts are missing and to get an idea of where I want to start... 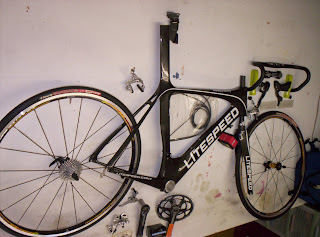 Then I carefully - VERY carefully - clamp the frame in my stand. Note the toe strap preventing it from sliding out of the barely-tightened clamp. 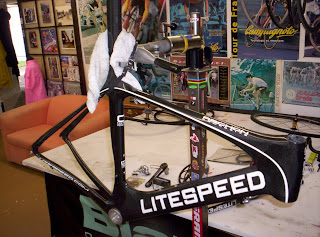 Next up I fitted the FSA seat clamp head using TACX carbon assembly paste. The integrated seat tube/post would eventually be cut down to precise height for a client, but for now I left it full length. No saddle as yet, as David was still deciding which one to use. 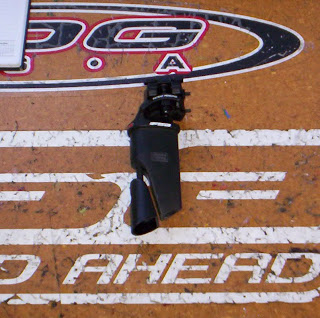 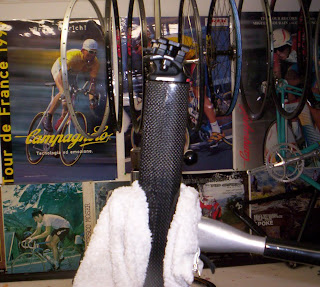 Next up I had to press in my first ever set of BB30 bottom bracket cups. Yep, eventually the modern technology even trickles through to Berhampore! 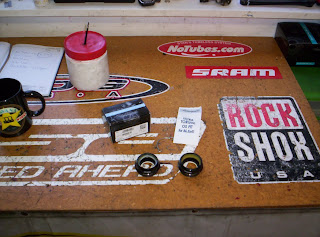 I don't yet own a BB30 bearing press so a bit of ingenuity was called for. After casting around my workshop for ideas I discovered that my trusty VAR headset press was the perfect size to work once the 1 1/8 cup setters were reversed. 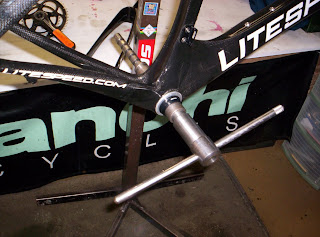 Once the cups were pressed in it was on with the Campagnolo Centaur chainset... 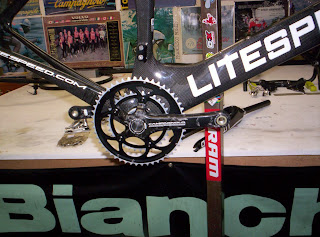 As well as the BB30 the other modern technology I was unprepared for in a tooling sense was the forks. In this picture you can see how the top of the standard 1 1/8 steerer flares out to the larger oversize 1.5" lower headset diameter. This increases stiffness while lowering weight, but as all my crown race setters are either 1" or 1 1/8" and wouldn't come close to working it again required some nutting out before I could press the crown race onto the forks. 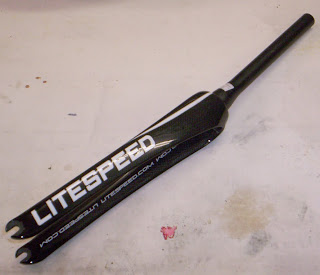 And here is the FSA headset, showing clearly the differing diameters of the two races. 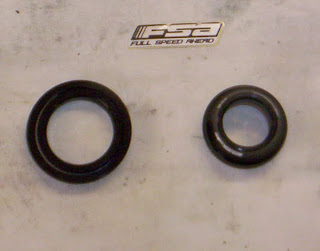 After a dry run fitting the headset to establish the steerer length (leaving plenty of scope for adjustment) I cut it down. 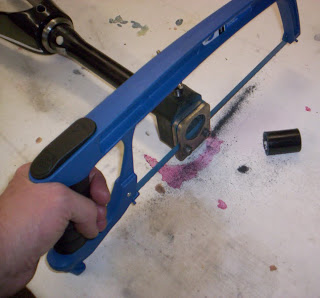 I then installed the headset, forks, spacers and stem, pulling it all together with a carbon steerer-specific compression plug. 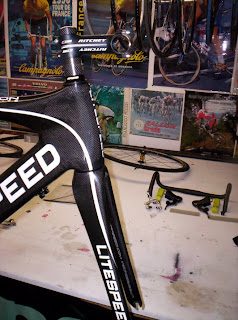 I then fitted the Ritchey WCS handlebars, Mavic Aksium wheels and front and rear Campagnolo Centaur derailleurs and brake calipers. It's coming together... 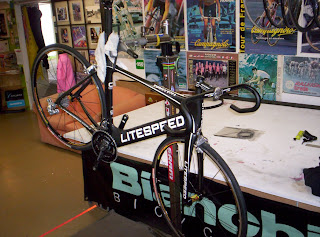 Then I fitted the chain and Campag Ergolevers (09 Centaur is still 10 speed despite the levers being the new 11 speed shape) and cabled up and checked the gears and brakes. 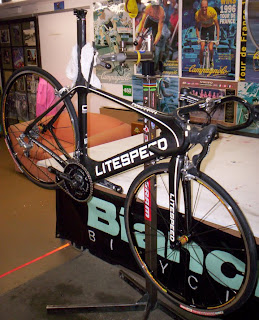 The frame has many striking features, the most noticeable of which are likely the massive bottom bracket area... 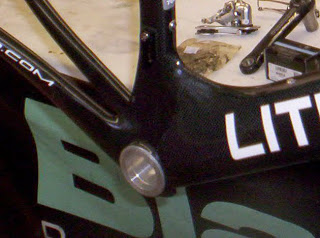 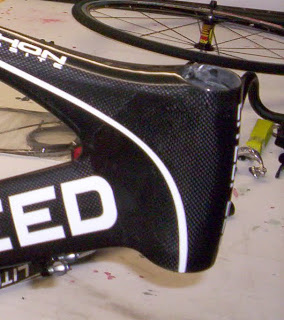 But I also liked the more subtle but no less important work done on the seat stays. Thinner in the vertical plane to absorb road shock and bowing out towards the dropouts to achieve stiffness along with the compliance. This shot shows the intricate shaping of the stays above the rear bake caliper. 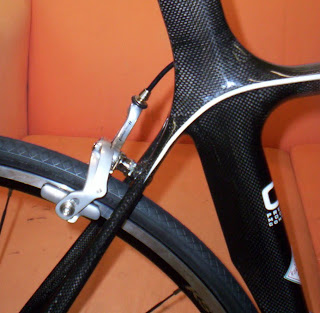 And done except (obviously) for the saddle and pedals. Hot. 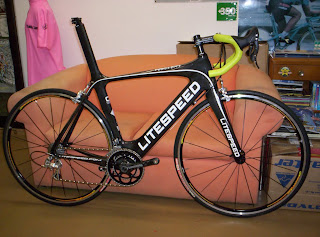 In this front-on shot the bowed stays can clearly be seen. 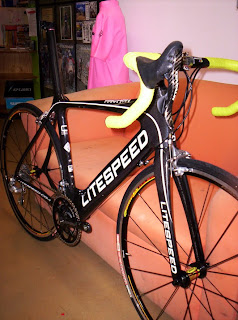 I couldn't test-ride it in this incomplete state, but Dave assures me I'll get me chance at some point soon - I can't wait! If the ride quality of the complete bicycle approaches the sublime build quality of the frame this should be quite a weapon indeed...

For those who may be missing my usual mad ramblings rest assured I will be back in a day or three to give you a lengthy dose of bike repairs and pointless ride reports - until then my focus will be on my beautiful wife, whose birthday it is on Tuesday. Happy Birthday, love!