Tales of a Tall Boy 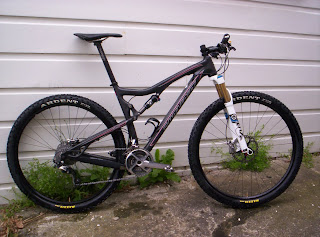 After his exertions in the recent Huka XL Tim Wilding was heading away for a well-earned weekend break, and he very kindly offered to leave me with his Santa Cruz Tallboy Carbon for an extended test ride opportunity.

I'd been asking Tim for his thoughts on this new-to-him format after building the bike for him a few weeks prior, and he suggested riding one properly was really the only way to find out what the ride of a top-flight 29er had to offer. A few weeks earlier my friend Bill had kindly offered me the maiden voyage on the cool Salsa Dos Niner I'd built him, but I'd stupidly turned him down and I was determined I wouldn't make the same mistake again, so I took T-Rex up on his suggestion instantly.

I've actually ridden many different wagon wheelers over the years, but rolling up and down Waripori Street checking gears and brakes isn't really the same as shredding some trails I know well on a proper ride, so I'd decided I'd take it up Makara Peak for a good fang after giving the bike its first service since it took 2nd place in Taupo... 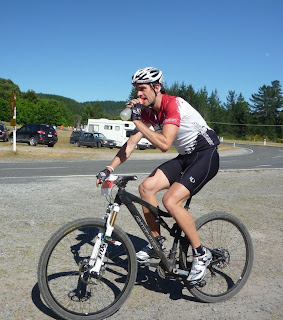 Now Tim is a tall drink of water at about 6'3" in the old money, or approximately 190cm. You'd think this would mean a 183cm chap like me would need to drop the saddle to get it to fit but, and this probably won't surprise anyone, I'm somewhat of a freak. I have an inseam of 94cm, meaning that over half of me is leg. I raised Tim's saddle 15 or so millimetres to the max height his Thomson post would allow yet still needed to raise it another 20mm to get it to my minimum height! Not wanting to damage the frame or void the warranty with a too-high post I just decided to make use of the bike as is - the lower height wasn't far off where I'd have it for "trail height", so it would just be seated climbing I'd be too low. The rest of the fit was pretty close to how I have my Commençal set up, apart from the kooky left-rear brake set-up Tim has opted for - not wanting to swap hoses over for one ride I would just have to adapt. I dropped 20psi from the front shock (!?) and added 20 to the rear, checked my sag and was ready to roll.

Saturday was taken up with shop and family obligations, but Sunday dawned fair and I loaded the Tallboy onto my cool new bike rack to rendezvous with my accomplice Al. 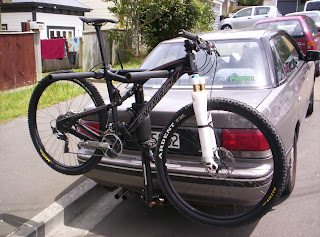 We drove over to K-Town and parked up in Friend St ready for the climb up Parkvale Road... 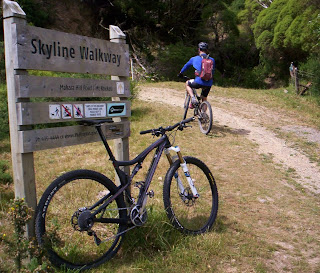 Due to the low seat height climbing up the hill wasn't as pleasant as it could be, but I could feel the big wheels wanting to roll. The light weight of the bike (sub-12kg/26lb) and the stiff carbon chassis meant standing climbing would have been a doddle if I didn't weigh as much as a small walrus. After a sound defeat from Al the previous weekend riding up here I could only put it down to the bike that I arrived marginally ahead of him today. 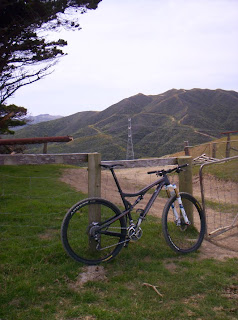 From this point it was a superb run along the gradual descent of Skyline - fast open doubletrack with a rough but dry surface was the perfect place to really get the feel of the 29" wheels. After riding the same trails on my 5" travel Meta the weekend before I was amazed at how much smoother the Tallboy made them. What a blast! 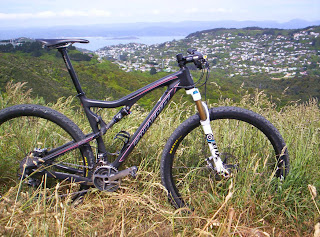 We charged at warp speed into an incredibly dry Cemetery Trail, before stopping for a quick regroup and a chance to commune with nature... 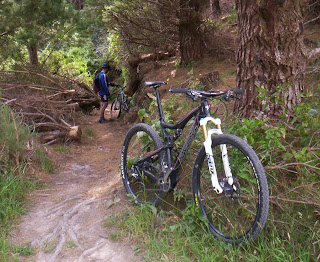 ...before continuing down. The bike ate up the open, flowy stuff but didn't seem to like the tighter action quite as much. There seemed to be a slightly more ponderous feel than my Meta when performing close turns and rapid changes of direction, but man it felt stable and fast otherwise! 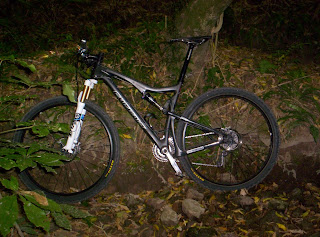 After an inadvertent diversion and some loud hallooo-ing to and fro, Al rejoined me none the worse for wear. We took stock of the day and decided we still had time to continue the ride... 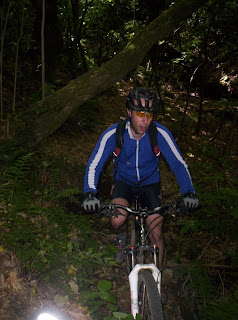 ...so we pedalled our way warily through the mean streets of the Karori ghettos towards the fabled and award-winning Makara Peak which pierced the sky ahead like Mt Everest, only smaller and with more Yetis. 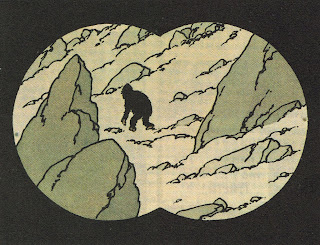 We rode up to St Albans and onto the lovely Rimu Trail, then up the AMP Connector to the Ridgeline Extension picnic table where we halted for a quick breather. 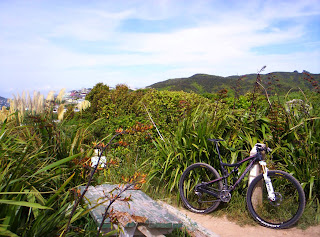 I had found the bike a bit of a handful on the tight hairpins of AMP, but I'm quibbling really. As soon as I began to roll down RLE I felt entirely at home on this lovely bit of carboniferous goodness. 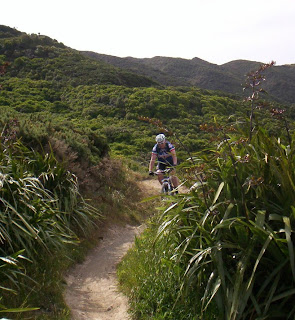 This led to what felt like my best ever run down the flowtastic Lazy Fern. The bike and me felt as if we were fused in some kind of a bike/man symbiotic meld, and together we made fast and light work of this lovely track. 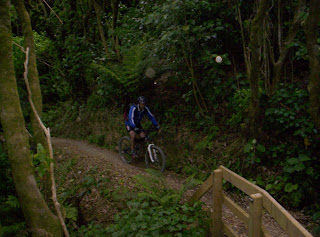 As we loaded the bikes up for the drive home, I reflected on the ride of the Tallboy. I was really lucky that I was on a good day - the Force was strong, the trails seemed like home to me, and I felt fit and well. Along with the several rides I'd taken on identical trails of late, this all meant I was ideally placed to really feel the full ride qualities of this wicked rig. 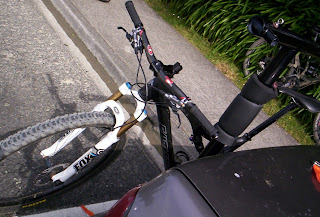 So, I hear you ask, what are my conclusions? I could describe this bike as being laterally stiff but vertically compliant, but that wouldn't tell you anything you hadn't read in a thousand bike reviews. As a not very fit or fast rider the best thing I could say was that it was a sweet bike to ride, and it made me ride better than I am. I can happily say that the Tallboy has many strengths (fast, open, rolling, small bump absorption) and only one weakness (tight hairpin turns) that I can discern. The long dry spell in Wellington meant that not a single spot of mud could be found, but I'm sure it would handle more difficult conditions with the aplomb with which it handled these easy ones.

I wouldn't say though that the 29" wheels were so much better than the 26" wheels on my Commençal that I want to immediately sell up and join the 29er revolution, but perhaps comparing a 100mm travel XC weapon to a 140mm trail bike isn't really fair. I will say I'd most definitely think about a 29er of some kind in the event I ever decide to replace my trusty Meta...

At work on Monday I gave the Tallboy a good clean and set everything back as Tim had it, along with giving it one final fettle before he takes it away for a summer of fun. Thanks heaps bro for the loan... 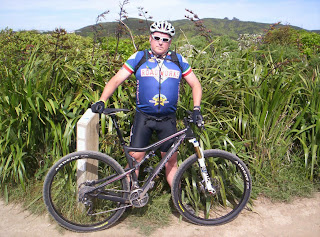 Great review bro! And, it sounds like a great ride to boot. Props to T-Rex for the generous opportunity too.

Its OK to drink the Kool-Aid and LOVE IT! :>) GREAT write up!

If my Trek relationship wasn't so good - I woulda got a Tall Boy - THAT is one nice ride and I hear it works well with a 120mm front end. I'll be bringing my SuperFly 100 to Welly on Jan. 2nd. Hope to share stories over a cold one when we are in town... Cliff[ord]

Another Awesome ride with Dr Oli !!
It was a pleasure to get out with you again, my Brother.

Cliff, I look forward to that ale mate! You know yours were the first 29er wheels I ever built, don't you? Cheers, bud.

I liked the bit about your freakish inseam. I thought the seat on your Bianchi looked high.

A keg on stilts, I think the description is. Cheers, Davo.