...They say an ill wind blows no good, but the Shamal wasn't blowing on the day when I took my 1997 Bianchi TSX-UL out for a roll on my newly installed wheels. 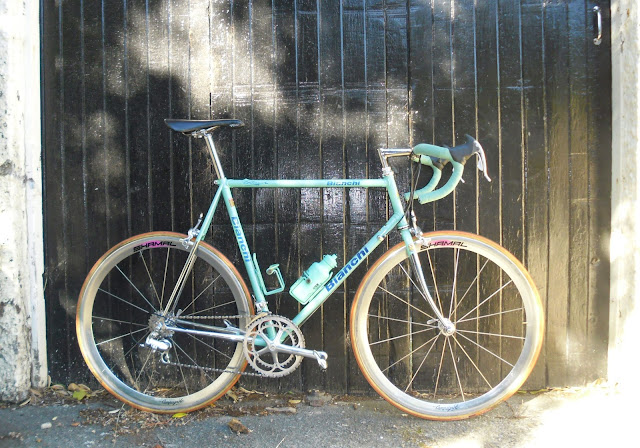 In a display of amazing generosity my friend Jamie has recently laid these beautiful tubular wheels upon me, in return only for the twin promises of some reciprocal wheels at some point in the future, and for me to actually ride these beautiful satin and polished hoopular constructs, not just display them to collect dust.

Initially I intended to grab myself some lovely new Veloflex tubs to glue on, but times are tight and it waits for no man, so some cool old period Vittoria tyres I had lying around got dusted off and glued on instead to get me out on the road. At last this classic old bike is as she should have been built back in the 90s, and I took her out on a gorgeous autumn day to capture her in a couple of scenic photos here and there.

As I took her up to speed on the fast run down through Island Bay the wheels fair hummed along, sounding almost carbon-esque in their resonance. The ride of this lovely old bike was transformed from great to awesome with the addition of these super-stiff race wheels from a bygone era. 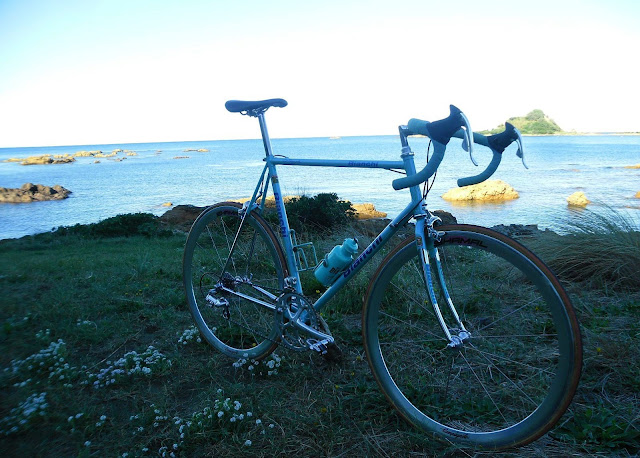 Moa Point, where I essay badly to silhouette the Flite saddle against the blue expanses of the Cook Strait. 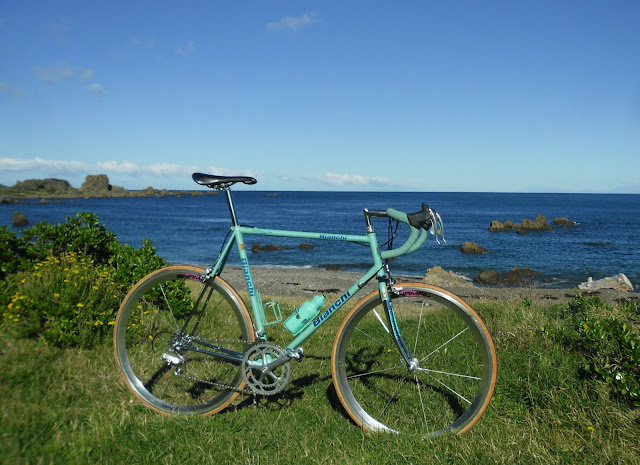 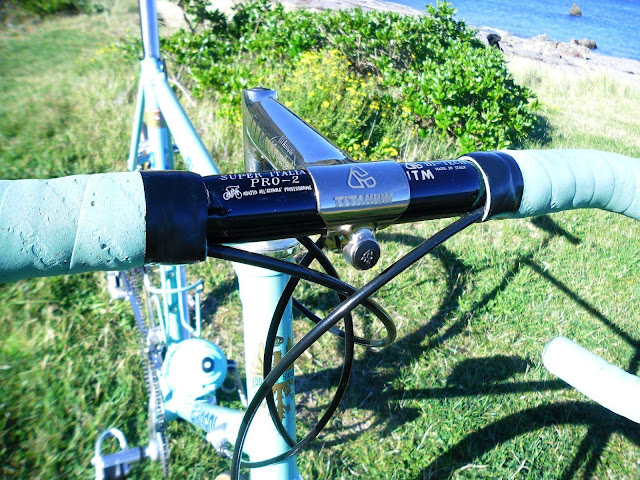 The satin-finish aluminium Record cranks are among the prettiest ever made, in my not very humble opinion. The Chorus Pro-Fit pedals were a 21st century special order from Vincenza to achieve compatibility with my other Campag machine. Note also the matching period bidon, clutched in a colour-coded Elite Ciussi cage. 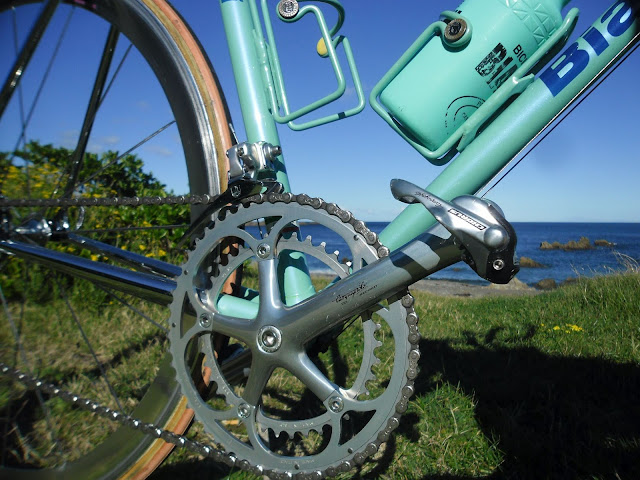 Between the steel forks and the Shamals, the ride can only be described as harsh. But I certainly do like a bit of road feel...I hate to think how this sort of set up must have felt to the racing sardines of the peloton! 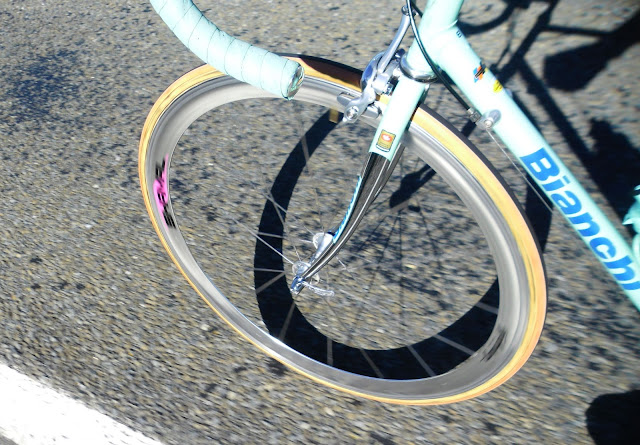 Scorching Bay, and the saddle silhouette is all but achieved. 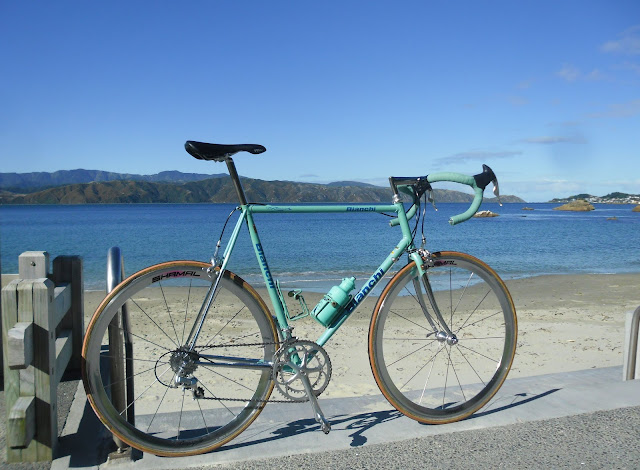 Surprisingly, the surly fucker on the hand-cycle who has been ignoring my cheery greetings for years said, "Nice bike!" as I passed him. 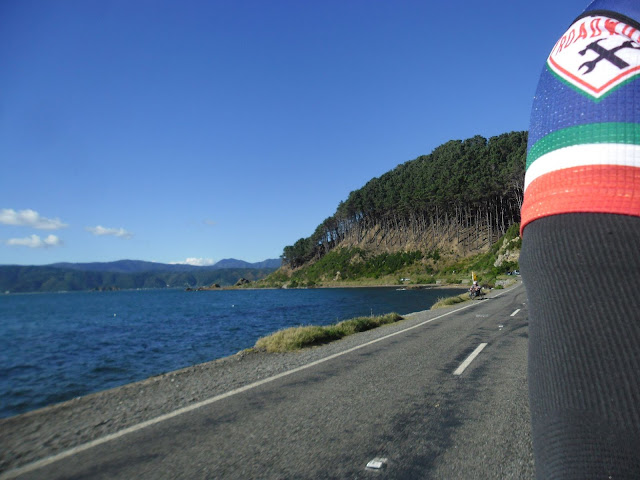 Random accidental photo of my Pantani replica glove as I dismount... 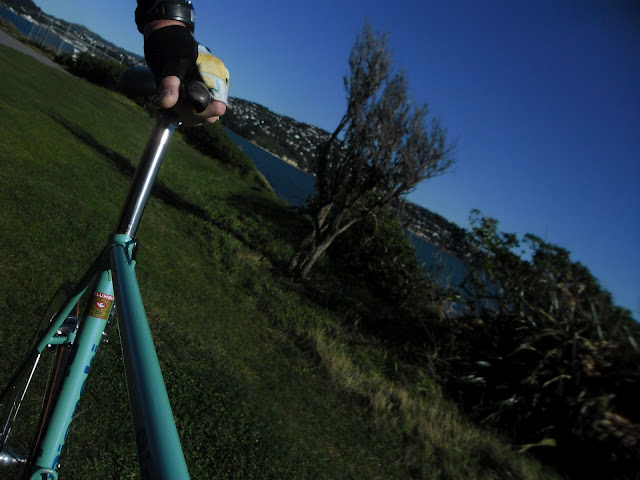 ...to take this arty shot of the city framed by the frame. Saddle shot nailed and, yes, that's a Record titanium seat post you're ogling too. 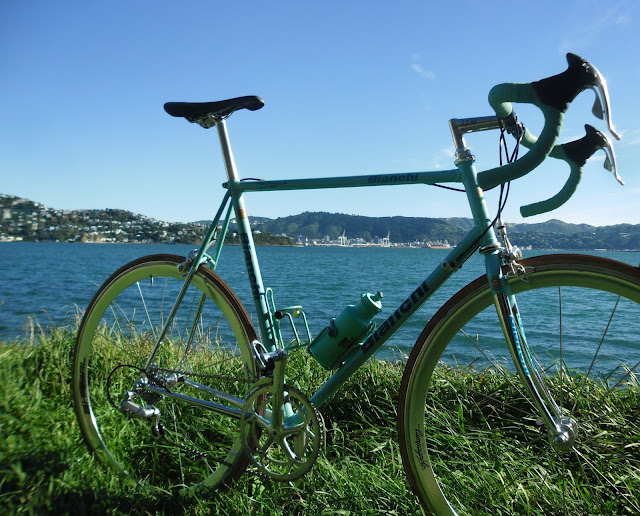 I do so love these roads I've been riding for 35 years. 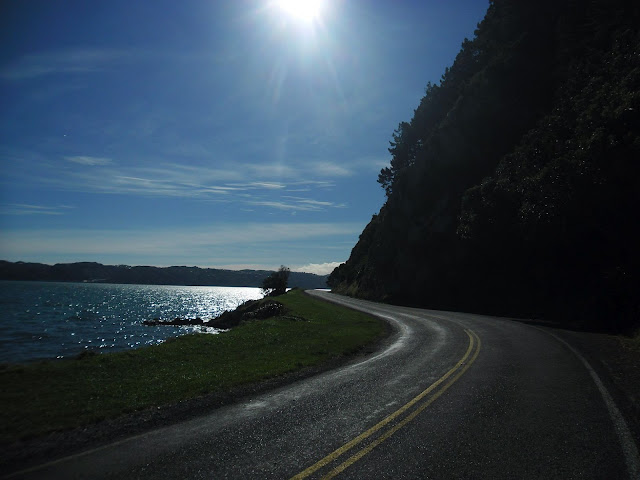 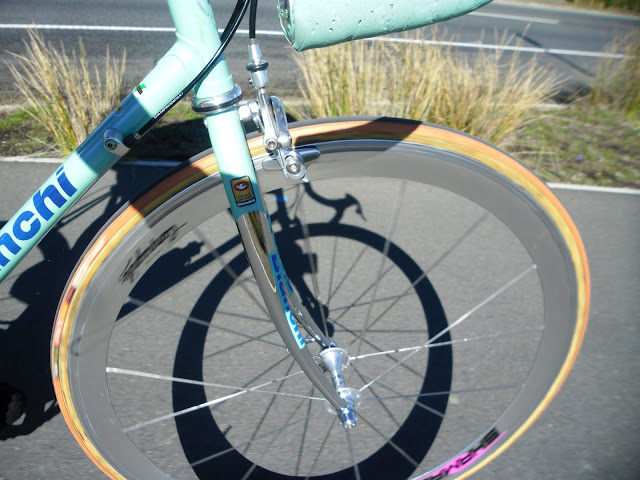 I have a very tidy back end. 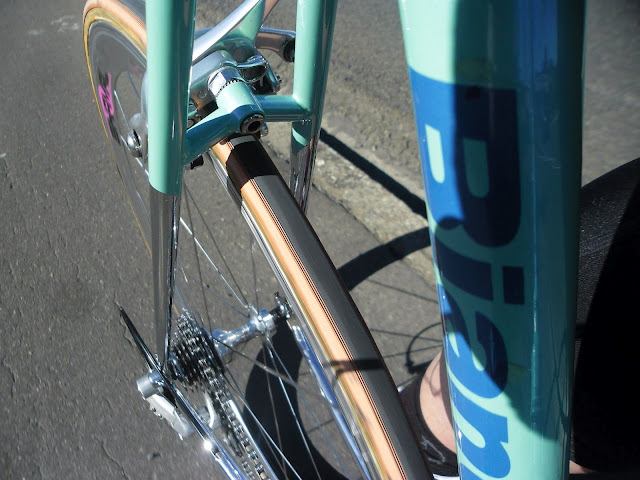 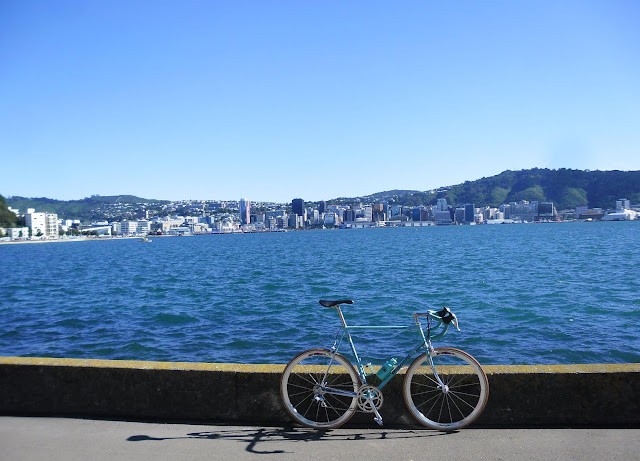 I casually paraded through town, fending off the amorous advances of all the mad Bianchi fans before stopping to rest outside the Parliamentary Library. 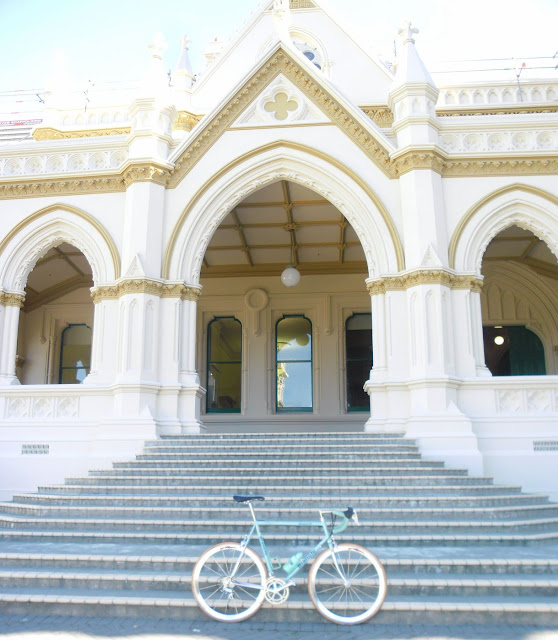 On the steps of the Parliamentary Library with Parliament and The Beehive behind. 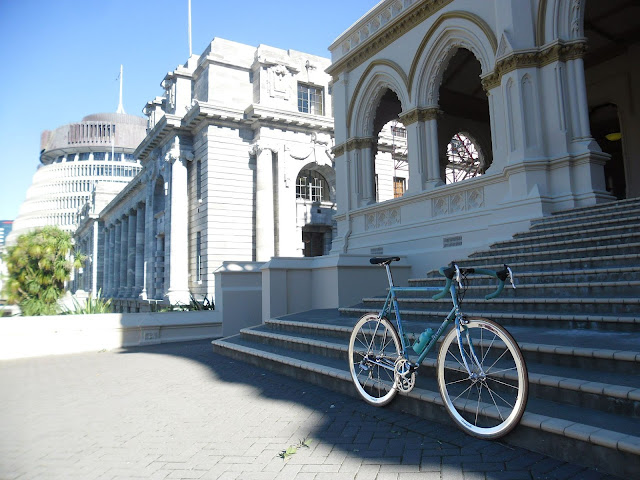 Close up of the head tube and the lovely polished front brake caliper. 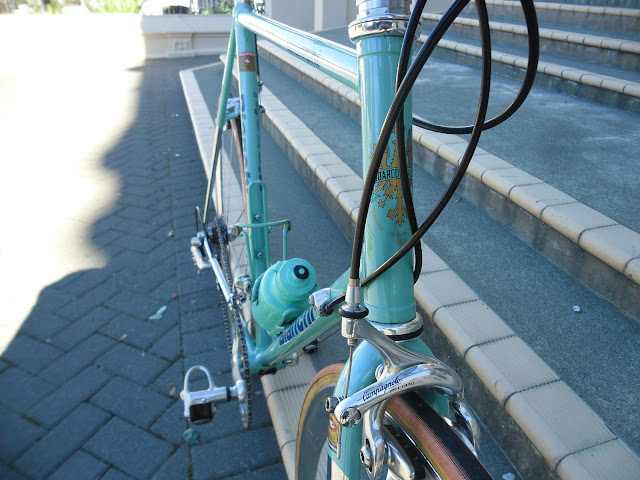 Similar view, but acceding to the clamour of those who couldn't see the 1992 Record Ergolevers. 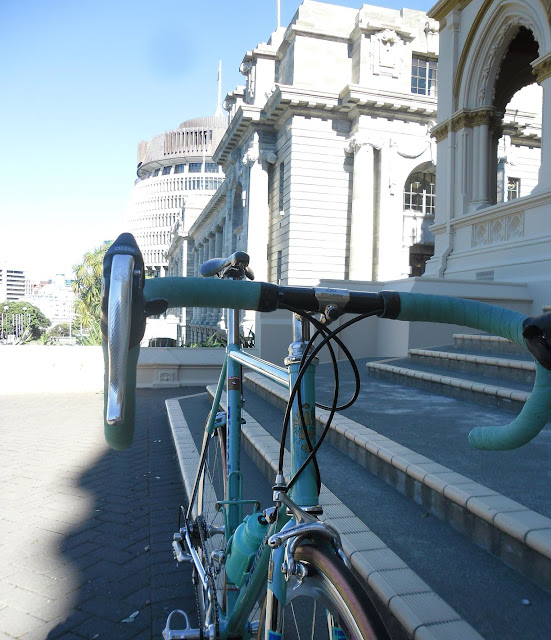 I took a detour through some dirty back roads. 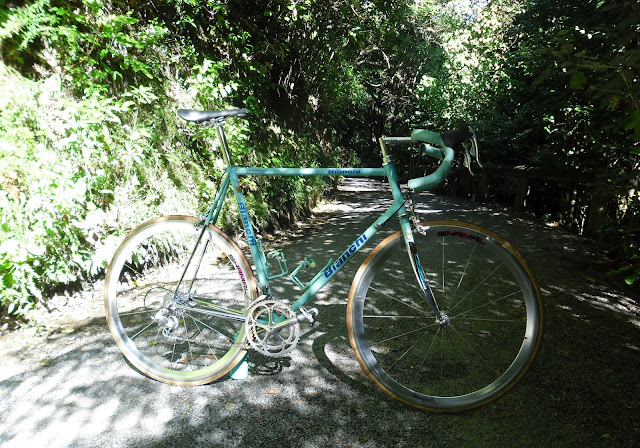 The iconic Wellington Cable Car makes its way down from the Kelburn to the City. Nice to look out over Kelburn Park and the City beyond to see some of the route around the Bays I had just taken. 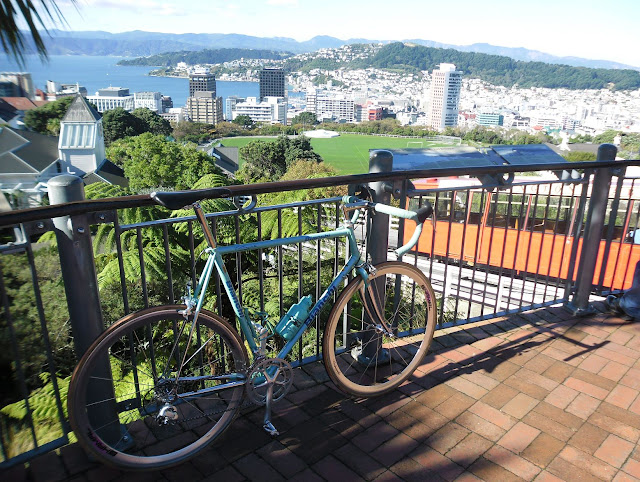 Of course Kelburn is just a quick spin of the Shamals away from Northland and the fabulous Revolution Bicycles, along with the mandatory delicious coffee brewed by my good friend and Revolution Grand Poobah Jonty Ritchie. 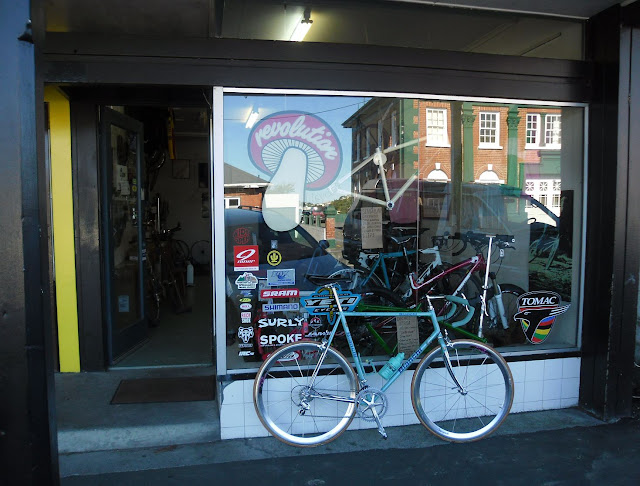 No photos of the speed-limit breaking drop back to sea level, but I wasn't going to let the ride pass without a photo from one of my favourite spots on the fabled Waterfront. 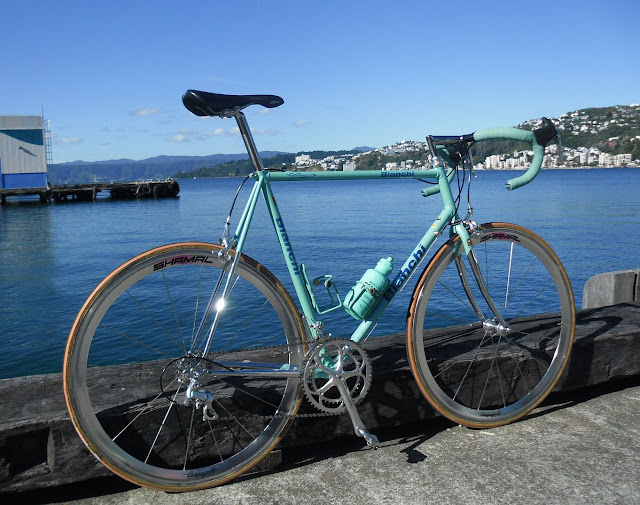 Home again after a great fun ride on a bike that is theoretically way out of date, yet still possesses a delightful ride that stands up well against anything modern I've ever ridden. The wheels add so much character and honestly make it feel as much like a modern race bike as a 22lb machine ever could. 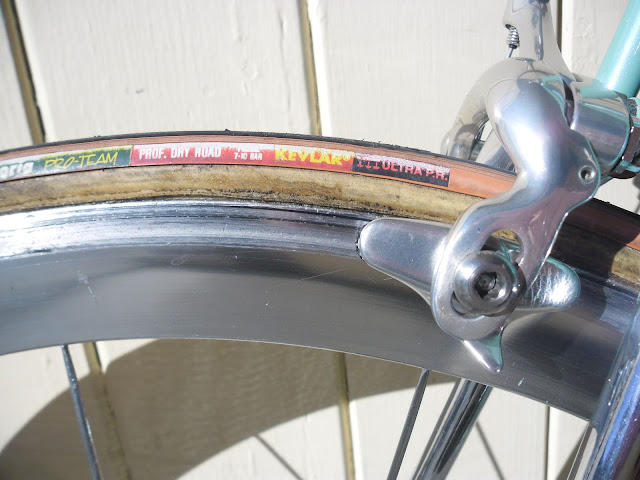 As the wheels are set up with the original 8 speed freehub spline I simply replaced the spacers with 9 speed ones and added a washer under the 26t and presto, 9 speed compatible! 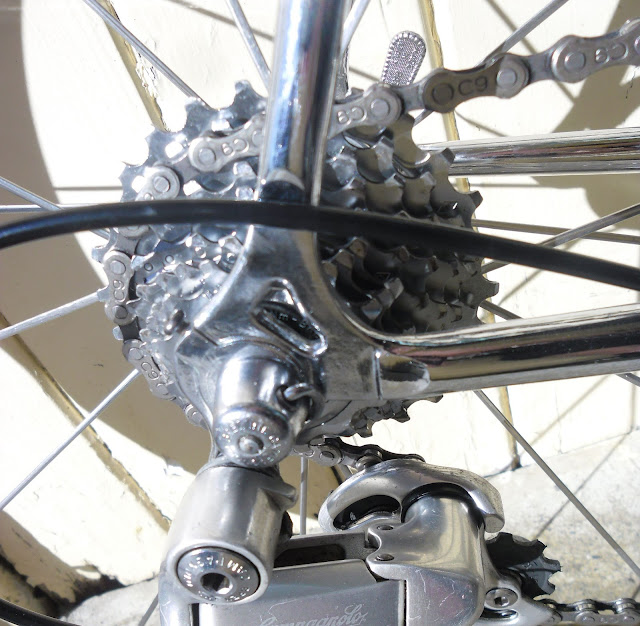 Another view of the Krystal stem, along with the Record headset. 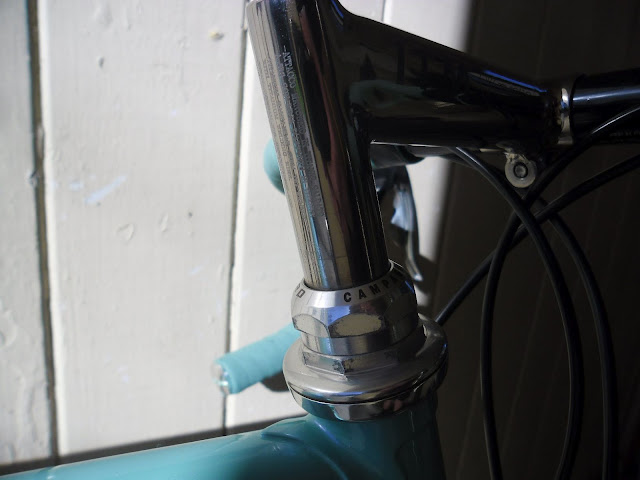 Bianchi and Campagnolo go together like, er, Bianchi and Shamal wheels. 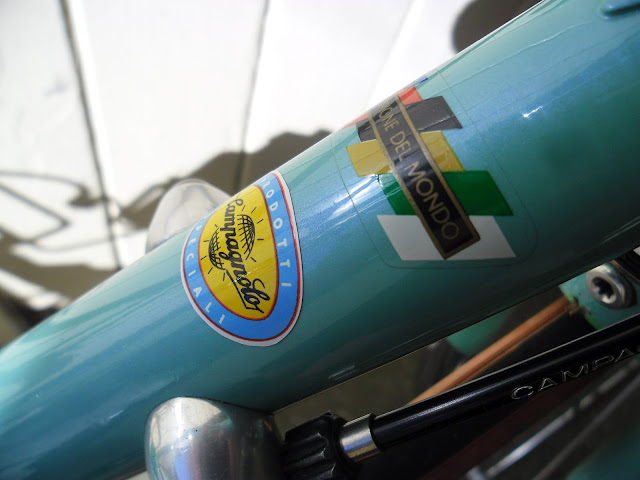 Hope you enjoyed the first of what I hope are many great rides on this superb Shamal-shod steed. Say that ten times fast... 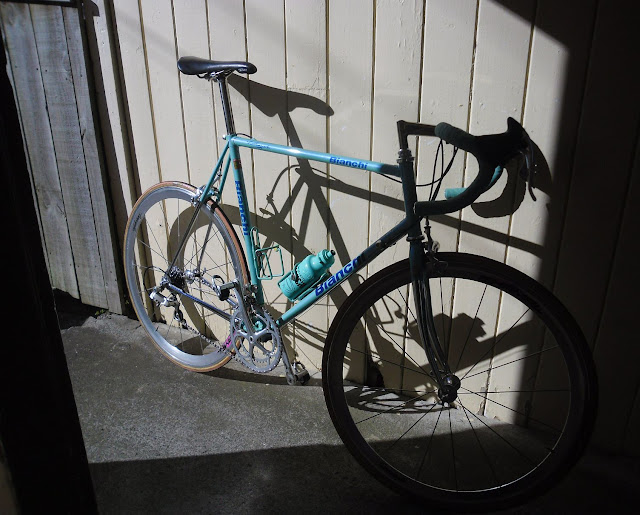 Have the same problem re solid wheels, on my carbon 'Chianchi' have some Mavic GL330 rims 28/32 X2 at the front X3 at the rear. it is so smooth so built some 24 deep rim Gipiemme Technos and they make the bike so bumpy , but they look awesome !!!!!