Late last Thursday night I had the privilege of building up Simon Kennett's interesting 69er rig for his attempt on the Great Divide Race in the USA later in the year. Check out his blog for more about this inspiring mission. The bike itself is a 2007 Giant carbon XTC-0 frame, with a specially ordered rigid Ritchey carbon front fork, custom built by Stan himself Stan's NoTubes wheels - 26" rear and 29" front - Easton carbon bars and tri-bars, and Truvativ Noir carbon cranks. In the current form it is still equipped with XTR but will be full SRAM XO as soon as stock arrives in the country. As it is built now it weighs an impressive 8.33kg (21.16lbs). Simon will be gradually shaking this down over the next few months (in between researching Classic NZMTB Rides 7), so this may well not end up being its final iteration...I look forward to helping hone this weapon into shape. 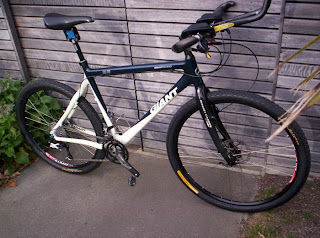 Also last Thursday (and into Friday) I built up another gorgeous Lynskey on behalf of David from Bike Fixation. This stunning titanium machine was built for a client in Christchurch who flew up on Saturday to collect it and have it fitted. I know Tony already through Vorb, so it was a pleasure to finally meet IRL. I'm sure he's going to love his new ride... 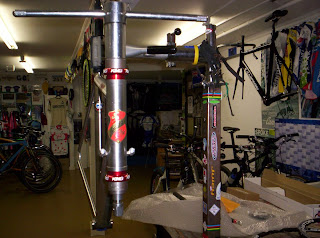 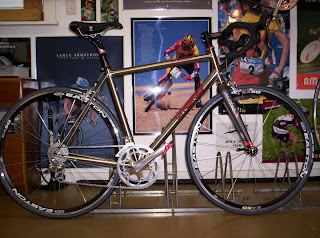 I've also been furiously (well calmly...) building heaps of wheels of late. Several pairs of Mavic Open Pro rim/Ultegra hubbed road wheels built up using my favourite DT Swiss spokes have rocked out the door, including a pair for Hamish from Auckland Grammar who I'll again be working with at Secondary School Nationals in September. Thanks heaps to Graham Hunn for asking me to be there - I'm really looking forward to again being a part of the Grammar Hammer!

I also built these lovely 29er wheels using XT hubs and Stan's NoTubes ZTR Flow 29er rims, again laced up with DT Competition double-butted spokes to go on a lovely new Niner being built by Jonty at Revolution Bicycles. At 1990 grams for the pair they will be a durable and lovely to ride wheelset... 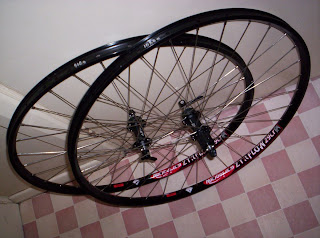 Lately I've been determined to do some proper riding. Years of putting work and family before exercise have left me massively overweight and desperately unfit, so I'm doing my very best to ensure that I get to ride 3-4 times a week. Hopefully I'll start to shed some weight soon, as I'm already feeling much stronger. One of these rides was on a stunning day in Wellington, of which there have been so very many this summer. I rode out to my childhood neighbourhood of Days Bay. I used to love this ride, but I must admit the Hutt Road and the generally high level of traffic are making it less and less enjoyable. It seems like there isn't a metre of this journey without bad coarse-chip resealing, glass strewn all over the road, close calls with morons close-passing you at 110kph, or a combination of all the above - don't even get me started on the appalling state (and bizarre design) of the so-called Hutt Road bike path!

Anyway, I got there safely and rode up my old street, Moana Road, and checked out where I first learned to ride my bike. I basically used to fang down Moana Rd and hard right into Tui Road for a run-out...This is also where I had my first crash(es). I think I still corner better on right-handers to this day!

Tui Road corner-harder than it looks! 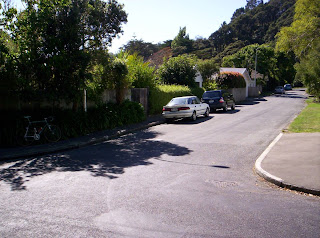 The Bay itself was in fine form. I sat on the wharf for a while drinking in the memories and admiring the views before braving the dangers of the ride back into town... 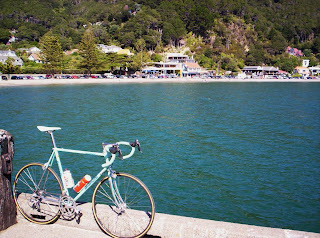 In the last few weeks I've also had a couple of great rides around the Makara Loop. On one I saw only one pair of riders going the opposite way and one of the two of them was wearing a Roadworks jersey! What are the odds? The Takarau Gorge has been resealed so I'd never seen the road so clean and safe to ride, although some escaped sheep on the road were doing their best to keep me alert! I combined my fitness crusade with my family obligation by stopping in Johnsonville at my inlaws where the family was having a BBQ - I'm sure the sausages helped my speed down Ngaio Gorge afterwards, though perhaps not my weight-loss aspirations!

Self pxt - not vain at all! 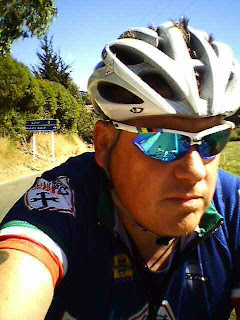 I did some work for my friend Gary Gibson (PNP Junior Track Coach) recently, and he kindly donated some stuff for my archives. Amongst a box of old papers and accounts he was given was this cool badge: 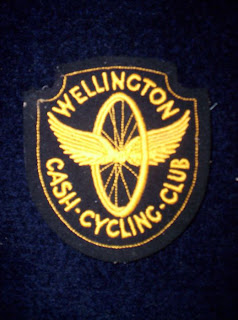 And this old poster - check out the impressive prizemoney for the day! 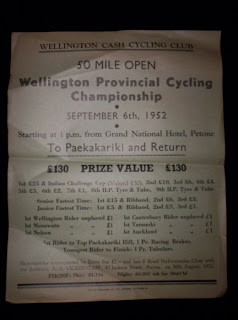 Details are somewhat sketchy on this long defunct club, but here's Gary's take on it;

I worked in Jackson St, Petone (Printing Company)in a building that once housed a sewing company upstairs (the building is now a bar/pub). The people who owned the sewing company were active members of the Wellington Cash Cycling Club and may have made the race numbers and race clothing for members (I have some race-numbers still). I found a box with records from the club at work one day when cleaning up so I took it home. The records are from 1935-1953.
I believe the Wellington Cash Cycling Club evolved from the Wellington Professional Cycling Athletics & Axemans Club, which was based in Petone. When Athletics started to improve their lot with better running surfaces and proper running-tracks, cycling had to go their own way so I'm guessing they split around the 1950's. My records show they were using the two names at the same time from 1950-1953. There are some great names in the results from Jennings to Vertongen. I need to read through the minutes and newspaper clippings to see what happened to the Club. Cash cycling was still around in some centres right up to the 1980's when I found I wasn't allowed to race in events because of my amateur status (Auckland and New Plymouth).

A couple of things to finish off with - I picked up my Chinese visa last Tuesday, so I must really be going! I felt a bit bad running the Embassy gauntlet of Falun Gong and Tibetan protestors, but I am afraid my principles have been waived in light of the chance to actually go to China.

Lastly, I had to perform a rather sad task last summer when I got asked to do a forensic examination of a bike a young girl was riding when hit by a SUV and killed in Whiteman's Valley. On Tuesday the case finally comes before the courts and I have been summonsed to be an expert witness. This means I won't be in the shop all day Tuesday the 1st of April.

Thanks very much for reading, Oli
Posted by Oli at 10:58 AM