Phew! Sorry for the utter silence - it's been a bit of a harrowing few weeks, as you might imagine. The good news is that Harry is recovering swiftly, so it's time to get back to normal life, whatever that is! Thanks very much to everyone who has expressed their concern. It means so much to Harry and us all...

Anyway, among all that drama I had the great honour and pleasure of working once again for my good friends Chris Drake and Susy Pryde from the Jazz Apples Cycling Team. Due to several of the Jazz girls being away at the clashing Track Nationals (IP and Points Gold medals to Ali Shanks and Lauren Ellis respectively), and Tour organiser Jorge Sandoval's request, for the Women's Tour of New Zealand we were wearing the race sponsors colours of Tabak Team International.

Unfortunately, Susy was a late scratching due to illness, but I was chuffed to be able to catch up with her the night before the Tour began for a fun late dinner at Chow, after Chris and I had attended a hilarious managers briefing at Race HQ.

After a good nights sleep, I woke early, loaded up the Roadworks Service Van with everything I could think of (too much, as it happened!) and went to pick up Chris from Thorndon. We drove out to our digs for the next 5 days, the good old Angus Inn in Lower Hutt, where we met the girls in time for the Race Presentation at the Little Theatre.

Ruth, Aurélie, Malindi, Chris and Sharon on the way to the Little Theatre 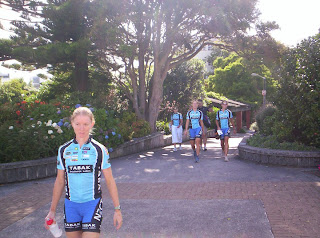 The Presentation was an introduction to the many teams from all over the world. As well as Pro Teams like number one ranked Team High Road, Equipe Nurnberger, Meninkini, Webcor, there were national teams from the USA, South Africa, Australia, China, Japan, as well as New Zealand of course. The rest of the field comprised smaller Continental or composite teams like ours. The field was described as the highest quality field to ever race in New Zealand, and it was hard to disagree when you saw that several National Champions, ex World Champions, and the current Olympic Champion Sara Carrigan were all there ready to race and race hard. The riders and staff all seemed to enjoy a spirited Kapa Haka group from a local school, especially the overseas contingent. It was a cool touch of Aotearoa for them to store away in their memories... 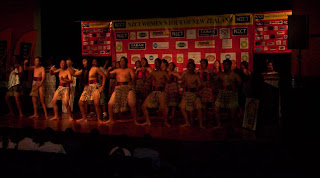 After lunch it was finally the time I most love on these jobs - Race Time! The opening stage was a criterium around Fraser Park. The weather was stunning, so we rolled along in the van behind the girls as they rode from the Angus to the start 10 km away. Very cool seeing Malindi riding in her National Champions jersey, and all the girls seemed to be gelling well.

My friend Paul Larkin was working for South Africa, so we parked up in the finish line straight pits with our spare wheels and enjoyed the racing. The stage was run off at a good clip, but with some of the usual crit carnage involved! The Chinese girls had some interesting directions to take, and we heard there were a few meaty crashes on the back of the course. One involved one of the Kiwis, who unfortunately was forced out with an injury.

Paul and I are the Pits 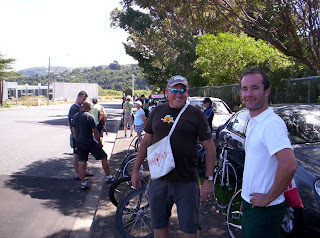 During the event, Australian National team rider Tiffany Cromwell had an altercation with the road, and she pulled into the pits. AIS mechanic Nicko needed some gear housing to get her back in the race before her free lap was done, so I foolishly offered to run - yes, I said run - back to my van and get some. A quick (relatively!) sprint and a mild coronary later, and she was sorted and safely back in the race, saving her 5 day Tour from being a 20 minute disaster. 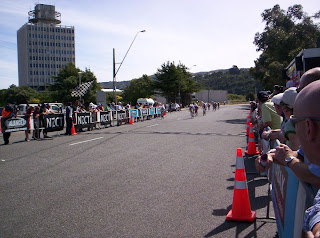 Unfortunately for us, poor Malindi was also feeling the effects of illness and had to pull out two thirds of the way through the crit. After the stage, we drove out to my old home town of Days Bay for a good coffee and a debrief at the Chocolate Days Cafe, then back to the hotel so I could wash and service the bikes. I did Malindi's as well, just in case she wanted to continue (we would have fought for a reinstatement), but she decided that recovery and some quality training was the best thing in the end. After doing the bikes and grabbing some buffet, it was time for a beer or two with Paul in the bar followed by deep sleep...

The bikes in my hotel room - Malindi's Genius to the fore 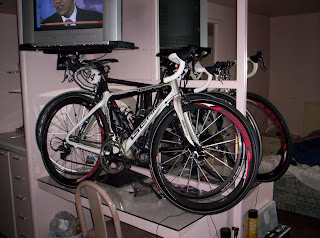 I'll leave it there for tonight, except to say I'm super stoked to say that today I received an email from Chris to tell me I'm off to China in April! The Jazz Apples Team have been invited to participate in the Tour of Chongming Island, near Shanghai, and they want me there doing my thing...This means I'll be away between the 22nd of April until the 1st or 2nd of May.

I'm a bit disappointed this means I won't be dealing out the hurt to everyone at the Rotorua Singlespeed Nationals, but I was worried about getting another tattoo anyway, and this opportunity is just too cool to turn down...