On Thursday the 26th of June at 3.45pm around 300 of Wellington's cyclists gathered in the sunny afternoon at Parliament to mark two awful cycling fatalities from the previous Thursday on our streets. Police Superintendent Steve Fitzgerald, 57, was killed on Petone Roundabout when hit by an articulated truck, and Desmond Eyre, 61, of Silverstream was killed when an opening car door hit him and sent him flying under the wheels of a passing lorry. 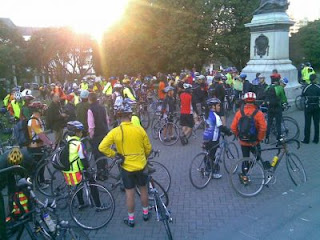 As well as being a Memorial to Des and Steve, the ride helped to mark the huge surge of despair and outrage cyclists everywhere are feeling at the careless use of 1000s of kilograms of steel in the hands of people who often don't seem to know or even care that we are perfectly entitled to share the roads with them, and also at the dire road planning that brings cars and cyclists into conflict - conflict which is inevitably more dangerous to cyclists than motorists...

We listened to some speeches from Pat Morgan and Robert Ibell of cycling advocates group CAN , then from Labour MP and keen MTBer Trevor Mallard, then finally ride organiser John Randal briefed us and we rolled out en masse under Police escort to ride out to Petone. 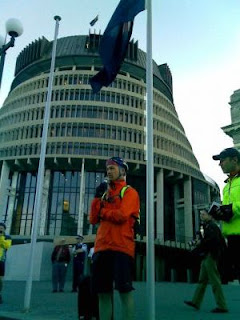 Despite the sober reason for the ride, it was great to see the usually car-stricken streets of Wellington being taken over by bikes for an hour or so, and great as well to see the widely variant cross-section of cyclists out riding. There were choppers, recumbents, Dutch commuters, DH and XC rigs, BMXs, road bikes, cyclo-cross bikes, fixies, singlespeeds and everything else you can think of, under all sorts of people...

We headed out along Thorndon Quay - one of Wellington's worst cycling Black Spots - and out along the Hutt Road and onto State Highway 2.

Even though we no doubt delayed some motorists from getting home for a moment or two, we reached Petone with only some minor abuse dealt out towards us. I think we all felt quite empowered by the large number of us that turned up, as well as by the safety of the Police escort, so the vibe was really positive, though definitely emotional. 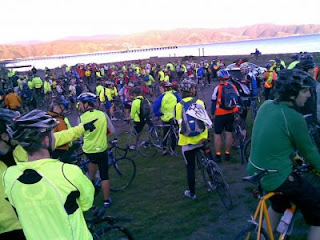 At a convenient roadside park beside the roundabout where Supt. Fitzgerald was killed we gathered for some judicious words from John again, and also from the Police Officer charged with assisting us. John led us in a poignant moment of silence, then in small groups we rolled back to our various destinations unescorted.

I rode back to town with John and Kah feeling good but pensive - I wondered if what we had done would have any impact at all, but I felt that we had definitely done something positive to make a statement that cyclist's lives are damned important, that we are husbands and wives, fathers and mothers, sons and daughters, and that we are vulnerable on the roads. When a car or truck hits us we die. When someone opens their door without looking for us we die. When someone is in such a hurry they can't wait a second or ten to safely pass us we die.

Check out this thread on Vorb, this story on Stuff or the CAN website for more info on this event. Here's a link towards a YouTube video of this ride too.

I ripped the photos straight off Vorb, so thanks to Celia and JungleJim who I probably should have asked...

Nice post Oli - I think of those dozens and dozens of times that I rode with Sam et al down the Hutt road and over Haywards in the dark winter evenings - there but for the grace of God (whichever one you chose) go all of us.

Cheers, Ben. I always say hi to Sam when I ride or drive out that way. He was in my thoughts on the ride...