Who ever said I was quiet?!?

Holy Mackerel! The power of the Interweb strikes again! After my slightly desperate and dejected plea for work, my lovely friends and clients stepped up bigtime - so much so that I have more work than I know what to do with! Cheers for the great response, but I certainly won't be making that mistake again...

Anyway, I won't waste more time babbling. Let's get straight into some of the action I have done/am still doing (okay, Hen?).

Firstly, here are a couple of shots of the general chaos that has ensued. 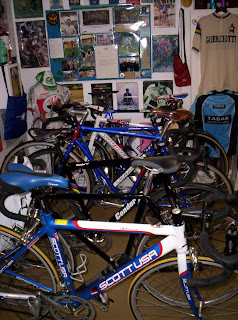 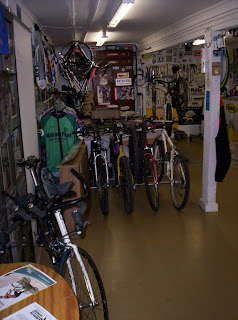 Amongst all those bikes I finished off this cool singlespeed for longtime customer and Cycle Services stalwart, Jenny. It's a Koga Miyata frame with a mish-mash of cool old bits... 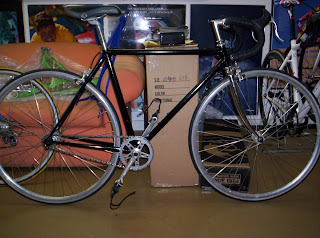 Next I completed the Condor that I stripped to build one of the Pedalforce frames I showed in my May the 12th blog entry. It required a few new parts like STI levers, bars and stem, but was mainly put together out of used bits that Ian and I had lurking around. It turned out nice, especially once I'd touched up the garks all over the top-tube... 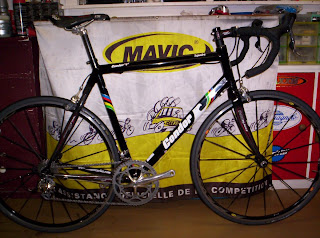 Some months ago I stripped a 90s Schwinn Peloton down so it could be repainted. Stokes Valley artisan Ross Bee did his usual fantastic job on the paintjob, including cutting the stickers by hand. This Reynolds 853 frame was always a lively bike, now it looks as sharp as it rides. 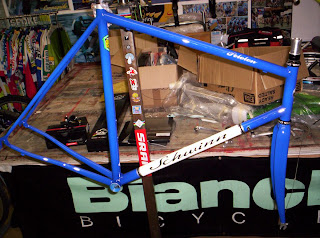 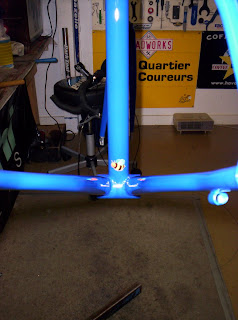 Finito! (Note the Heckler on the couch...keep watching. 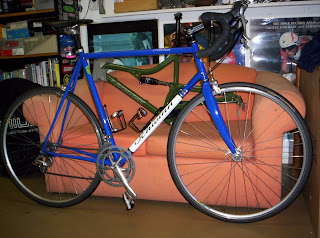 I did a bit more on Daniel's 1950 A.S. Gillott that I cold-set on May 28th. First I set up the wheels that Tristan from Wheelworks built, then I fitted the supplied stem, bars, brake levers, calipers, crank and chainring, and fixed cog. I also taped the bars with some cool old-school Cat-Eye cotton tape. Still waiting for a chain, some pedals and an 8mm seat binder bolt and she'll be on the road. Lovely! 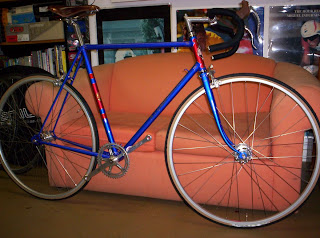 To build this bike I used some awesome period Campagnolo grease that my good friend Wheels found for me along with a bunch of other cool old bike treasure left over from Cycle Services. Also in the box was this Morningstar Freehub Buddy, designed to grease supposedly non-serviceable Shimano freehubs. 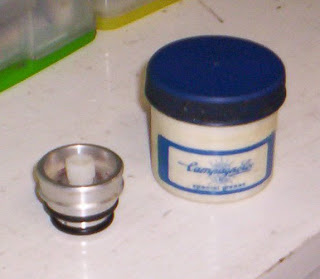 Now for a quick taster of some of the jobs I've still got coming up...

From Bike Fixation comes this Chumba F5 DH rig, featuring a floating brake arm I have NO idea how to set up! :-D 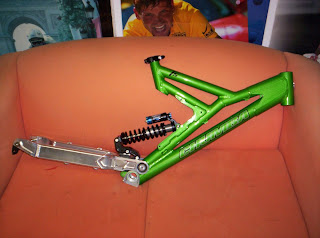 A mint condition Look carbon frame, c1996ish - still waiting for some Campagnolo compatible wheels so I can build it with the new Chorus gruppo Doug has bought for it. These were always a great ride, so I can't wait to see how it stacks up against more recent Looks. 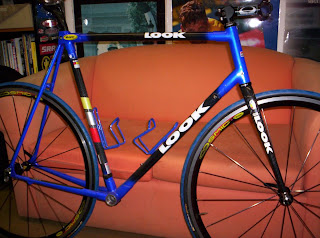 This very suave Specialized Langster is in for some subtle mods - new Record levers and front caliper. The whole bike is wicked, but I'm particularly digging the Cinelli Ram bars. Bling fixies rule! 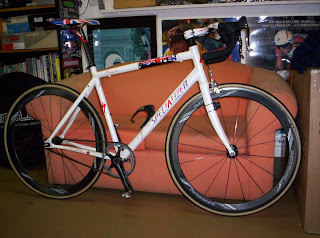 Lastly but by no means least is this uber-cool Colnago Master Saronni edition frame - a modern version of the emblematic frame that Italian great Guiseppe Saronni rode to his 1982 World Championship win at Goodwood in England.

I'm fortunate to be building this up with full Campagnolo Record kit, Fulcrum wheels, ITM Sword carbon bars and stem and a Fizik KI Mobius carbon saddle. I don't mean to play favourites, but I'm looking forward to building this more than anything in a long while... 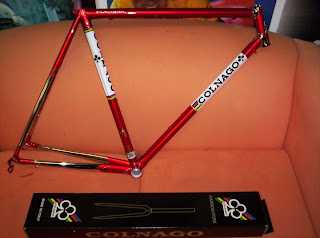 I also have lots of news about the Jazz Apples, the Delmaine Team, and even an upcoming race appearance for yours truly, but I'll save that for later along with the pics of these finished projects.

As ever, thanks heaps for the support. Cheers, Oli
Posted by Oli at 10:47 PM

holy crap you got some busy arse action going down

Haha! Talk about from whoa to go! It's a bit calmer now, but still plenty on - hopefully keep it at this level for a while...