Getting down and dirty...

I sit here typing this while the rain falls on Wellington like it has almost the entire last three months. I can't think of a wetter winter in my life, and it looks as if spring is going to be damp too. Consequently, I'm suffering from my 4th bad cold/flu thing of the season and am at home instead of working on Guerciottis and Fulcrum wheelbuilds, dammit...

I'm also not quite recovered from what appears to have been a concussion caused by my interface with Ridgeline a couple of weeks ago. I am still getting blurry vision and headaches, as well as feeling like I've been body-slammed by Mr T.

I tried riding my roadbike (see below) yesterday but the attempt was aborted after only 40 minutes. It looks like my Glorious Comeback is delayed another week or two, so Lance will be getting a headstart on me. 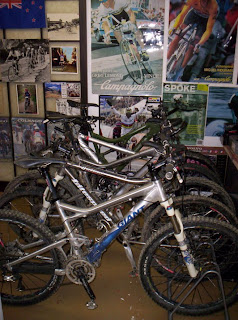 Among the collection were this cool Litespeed Unicoi softail. The Rockshox SID rear shock and non-pivoting titanium chainstay flex providesabout an inch of rear travel - just enough to take the edge off rough trails without losing too much pedalling efficiency. 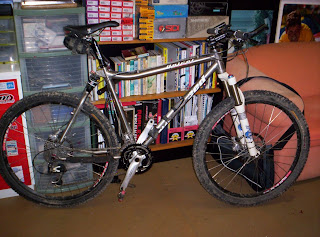 This Gary Fisher Cake 1 5" travel trail bike is a cool rig...we used to sell a lot of Gary Fishers at Cycle Services, and I always liked the geometry and ride of the older models - the Cake 1 seemed very nice in my brief test ride. 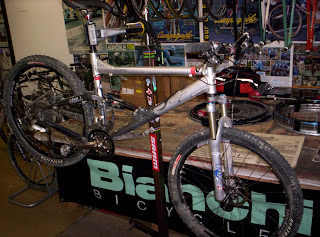 Next was this fruity Giant Trance belonging to a friend from the Makara Peak Supporters. It's been modified with a Gravity Dropper automatic adjustable seatpost, as well as with a cool Stronglight Magma chainset with ceramic Token bottom bracket. 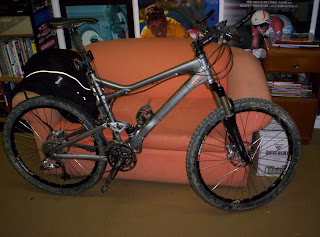 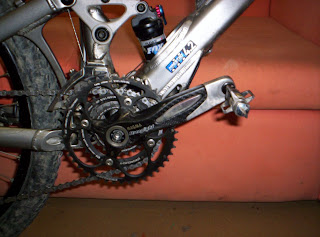 I then had a play with this cool Litespeed Pisgah blinglespeed. Glyn had been slowly upgrading parts on his geared Litespeed hardtail when he discovered some cracking around the headtube. Litespeed didn't equivocate, they just said to send it straight to them and they'd sort it out, so they cut out the old headtube and downtube, replaced them with the latest iterations, restickered the frame and sent it back for him to change the theme a bit. Hot bike for the one cog set... 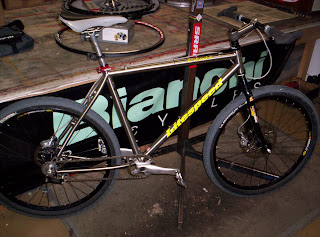 This lovely Heckler I built up a few weeks back came back for a longer front brake hose and for me to attempt a modification to the forks. The brake hose was straightforward, but the fork job less so. They are a set of coil RockShox Pike 454s that Julian wanted converted to air shocks using a supplied air cartridge. Unfortunately despite my best efforts I was unable to get full travel out of them, so they've gone up to the air cartridge supplier to be sorted out. I'll be interested to hear what the problem was so I know next time... 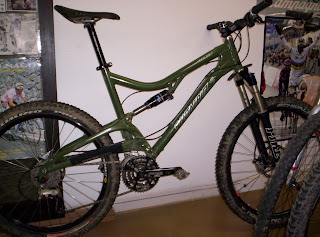 From the sublime to the...er...slightly less sublime. Just to prove that I don't get to work on high end fruity machines all the time, this old Raleigh belongs to my good friend and best man Jim. Jim uses it to commute between Breaker Bay and his office in Evans Bay and to say it was in a poor state is doing an injustice to poor states all over the world. 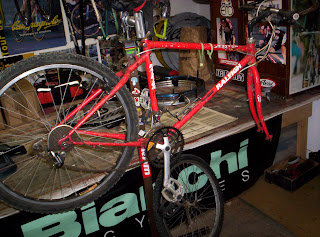 I replaced every cable on the bike, de-rusted the (amazingly still in good condition) chain as best as possible, trued the buckled wheels, repacked the hubs, headset and bottom bracket (replacing the axle and cups too), and greased every nut, bolt and fitting I could find. Apparently Jim is going to look after it now...I guess I'll find out in a year or two. 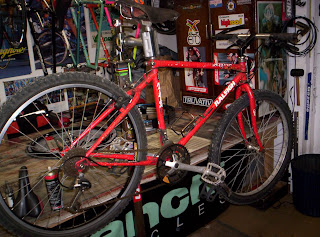 The more eagle-eyed among you may have noticed the sudden disappearance of the Specialized Tarmac from my previous post. I pulled it as a kneejerk reaction to the shocking news that it was in fact a counterfeit frameset!! The owner had brought his first one to me which I discovered was misaligned, then he got a replacement second one which I duly built up and was very happy with. I've decided to repost it, so here it is as I finished it. As you can see, it's a very good copy on the face of it. 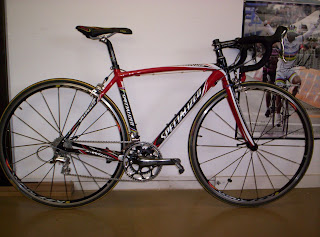 Unfortunately, on the owner's first ride he had a minor prang which resulted in the headtube falling clean off - luckily without injury resulting! Extremely disgruntled, he took it into the local Speshy dealer to be informed that it was not what it pertained to be, and this set in train complaints to Customs and the online auction host where it was sold from. Amazingly, Sheppards who are the authorised Specialized importers are supplying the owner with a new frame at a great deal - something they certainly didn't have to do. Very impressive.

If there's one lesson that comes out of a story like this, it's that if you're buying something online please ensure that you know what you're buying. Also, if a deal looks too good to be true, it probably is.

I built a few wheels last week too, as I'm wont to do. For Scott in Geraldine I built this cool pair of dirt-jump wheels. He supplied the Mavic EX721 rims, the DMR Revolver front hub and the Last Zakk rear hub with integrated 11 tooth sprocket. Scott is taking his slopestyle bike to Europe to do the Qashqai Challenge, so the wheels are going to get an international hiding! 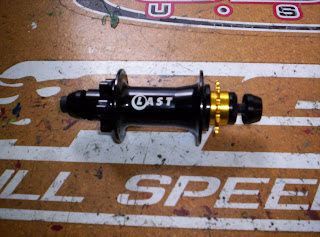 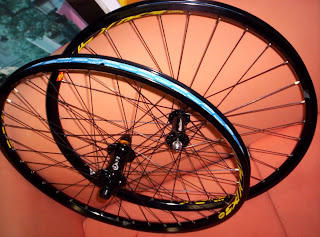 Talking about international hidings inflicted on wheels I've built, my friend Lisa Morgan borrowed a pair of wheels I built earlier this year for someone else to race the recent Canberra World Cup MTB race on. Lisa did great and finished 16th in the same lap as winner and ex-World Champion Irena Kalentieva. I'm happy to name drop when I say that another friend of mine, Rosara Joseph, finished a World Cup NZ-best 2nd place in this rehearsal for next years World Championships on the same Mt Stromlo course.

Apparently the wheels took a bit of a hammering on the rough and rocky course, so I'll be giving them some love over the next week or two - they're doing the Taupo Day/Nighter under their original owner this weekend. 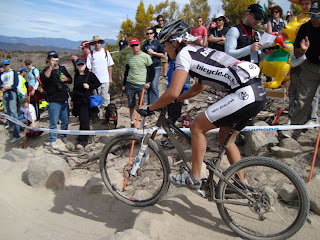 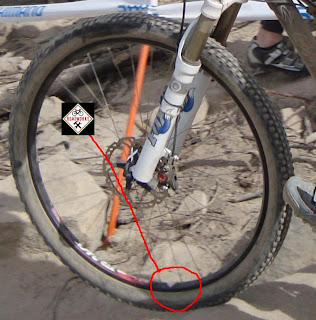 A couple of weeks ago I posted a pic of Andrew's Avanti Pista that he's getting painted. The wheels were the victims of a mass dodgy batch of spokes that were doing the rounds on OEM bikes for a while - the spokes would randomly and rapidly corrode from the inside out, breaking regularly. I rebuilt the Novatec fixed hubs back up to the Alex DA22 rims with DT Swiss Competition spokes in glittery silver. These will most likely be just back-up wheels, as he'll mostly be rolling on hot customised fixie Spinergy wheels... 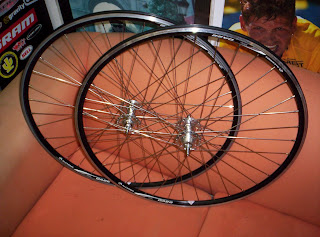 I had some spare time the other day while waiting for a client to turn up, so I took advantage and gave my Hillbrick a bit of a tickle-up. While I haven't been riding much, when I have ventured out the roads have been covered in crap, so it certainly needed a clean! I also decided that the white handlebar tape look wasn't right, so used some of Team High Road's left-over from the Tour of Welli black handlebar tape to finish it off. I love this bike... 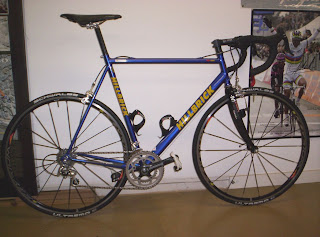 I'll start winding this post down with this photo of myself which, immodestly, I quite like. It was taken by Podgie, the owner of the Unicoi above, at the MTB Nationals last summer. Despite realising that my helmet should be on my head and not on my 'bars, I like the shot as it brings back memories of one of those great carefree days, with nothing to do but watch others suffer... 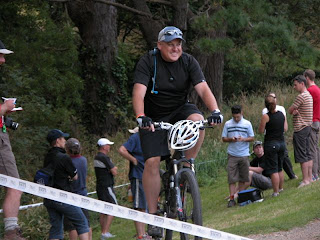 I also discovered these photos of my dear friend John Randal and his daughter Kaitlyn after they demolished the tandem record at the Karapoti Challenge earlier this year. After having the most fantastic Fathers Day last Sunday (thanks lovely boys!) I thought it appropriate and thematic to show them. Beautiful. 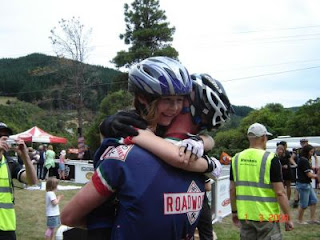 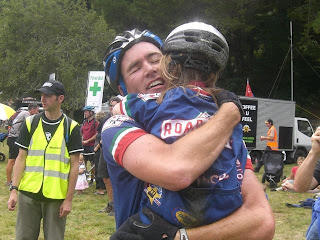 To end up I will post these shots of some stock I have lying around. I figured this was easier than simply putting up a list of everything, so if anything in these pictures is of interest to you, please email me and I'll give you a price to ship it out to you. 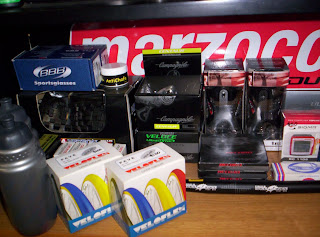 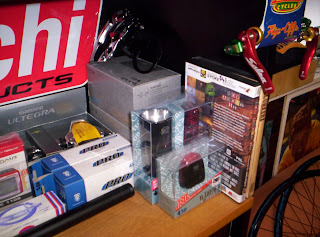 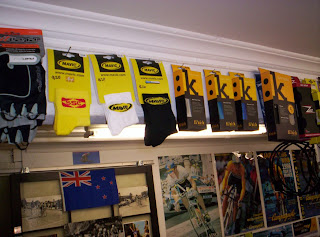 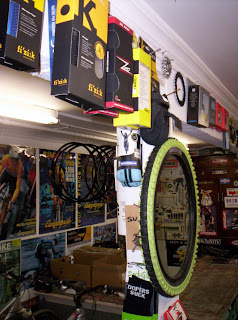 I'm back off to bed now to feel sorry for myself and drink Jacq's superb lemon and honey drink - I hope you enjoyed this instalment of the blog. As ever, I appreciate you taking the time to czech out my action.

P.S. Best of luck to the Delmaine Team at the Jamis Day/Nighter in Taupo. I'm bummed I won't be sharing this fun weekend with you, but I hope that you'll cope without me!
Posted by Oli at 2:05 PM