Due to circumstances beyond my control I am sitting at home writing this blog instead of helping out Auckland Grammar School at the Perry Foundation NZSS Nationals. I'm very disappointed to not be there - I seem to be having no luck meeting my travel/race commitments of late, and I find that immensely frustrating...

I'm quite sure they'll conquer all before them despite my letting them down, so best of luck to the Grammar Hammer!

Anyway, it must be Taupo season, as everyone drags out those old road bikes and starts to think about putting in some decent miles in preparation for the iconic lap (or three!) around New Zealand's biggest lake.

I've been absolutely flat out and here is a taste of why... 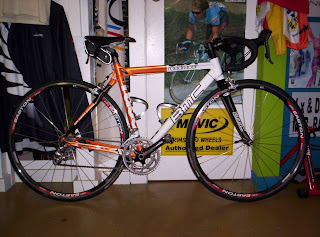 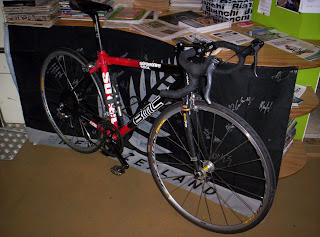 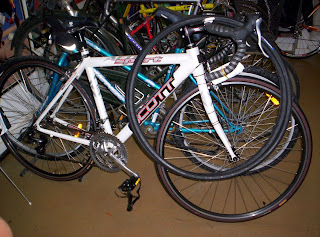 Along with the roadie tune-ups I always have some other things going on. My old friend Glen has been unable to ride a bike in the hills for some time due to some bad ongoing knee issues, so we discussed lowering his old-school gearing from a 39-21 low to something that would enable him to scale some of Wellington's bumpier suburban climbs with hopefully a bit less pain. A compact chainset with 34 and 50 tooth chainrings in combination with a 12-26 tooth cassette should give his poor knees a break - if not, we'll refine it further using a mountain bike derailleur and cassette... 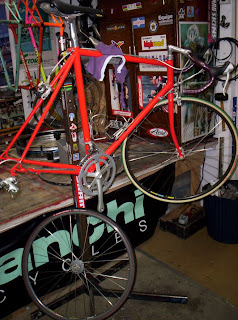 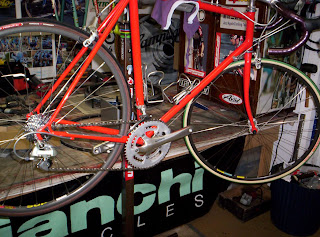 While I was getting the Rocket Rouge ready, Daryl visited me in the shop. He is training to defend his 5 Passes Tour Lantern Rouge title on his Power Cranks, so I thought I'd snap a quick pic of these "interesting" devices.

A clutch mechanism means they are supposed to pedal independently of each other, with the objective of improving pedal stroke and, hence, power. A mind-bending concept to grasp, especially I'd imagine as you freewheel into a corner. Also, both cranks sitting at the bottom of the stroke as you take off must make things tricky, not to mention track-stands must be impossible - what would I do at the Riddiford Street lights?! 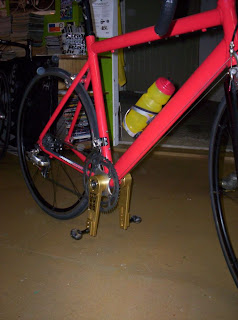 Next cab off the rank is this mid-90s era Scott Endorphin carbon MTB. 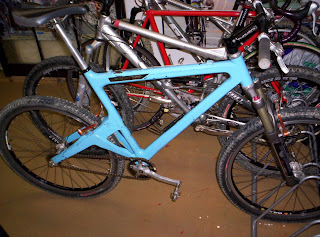 When these first came out, us Cycle Services retro-diehards were convinced they'd fall apart on the second or third ride - no way could they be as good as a "proper" frame material like steel or aluminium! Well, Bill's Endorphin is one of three that I see from time to time, two of which are singlespeed. Both Bill and the other s/s rider are very powerful riders, so the fact that their frames have held up to their punishment is testament to the strength and durability of carbon fibre as a frame material...

Ironically, it is in my shop to have it's aluminium crank replaced! :D 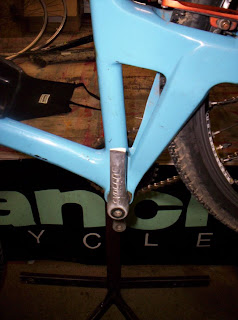 Then I moved onto this cool TST titanium hardtail MTB. 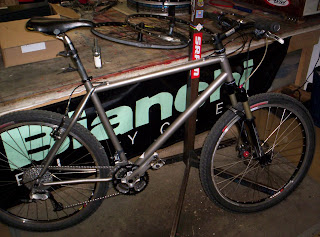 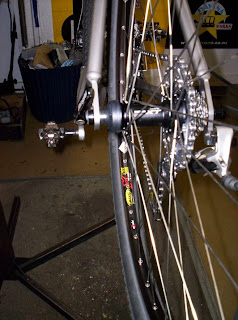 And a new XT drivetrain... 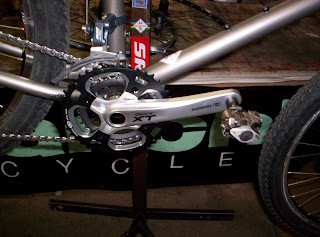 Part of my collection of customers wheels and rims... 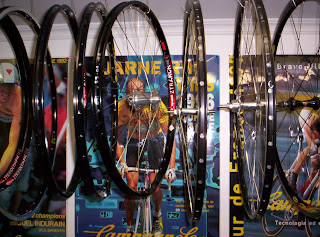 Some Paul's hubs turned up in the mail for a client's future singlespeed project. Not sure what rims he's going to use yet, but thought a blurry pic of the hubs was in order. 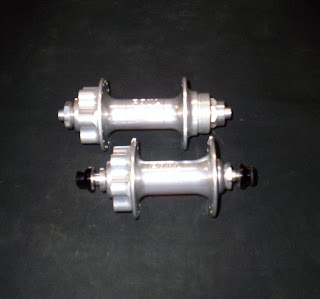 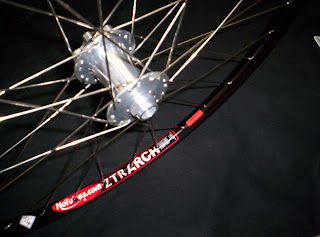 I built up this 28 hole Mavic Open Pro rim onto a DT 240 front hub for Alex, a local up and coming road and mtb racer who rides for Revolution Bicycles. 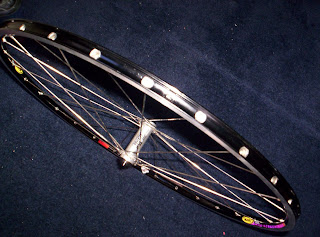 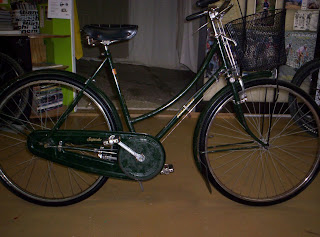 I love the BRG and panelling/pinstriping! 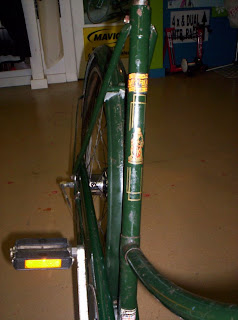 Mostly it needed a bloody good clean and lube, but the three speed Sturmey-Archer hub needed oil and adjustment, so I had to rummage around and find my rarely used 3-in-1 oil! Note also the specialist tools required for a complex job such as this... 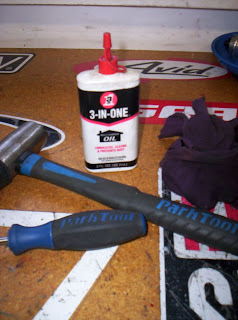 In the days of my youth I rode exclusively on tubular tyres, which required carrying a spare if you didn't want to ruin your wooden soled Detto Pietro shoes walking home. One wrapped one's spare Clement Criterium Seta in an old page torn from L'Equipe or La Gazzetta dello Sport and then fastened it under your Cinelli saddle using a Binda Extra toestrap. However, those truly in the know used one of these cool old Zeus tubular holders. Thanks very much to my friend Dave Benson for sending me this superb new old stock device. 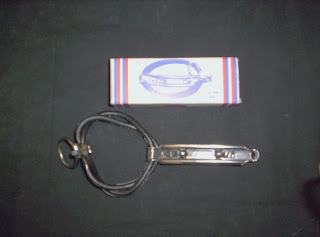 Once I had finished my work for the week and packed my tools and spares in preparation for my theoretical trip to the races this weekend, I spent some time on my two older boy's bikes. My 14 year old son Kester had grown out of his second frame in two years, his much loved and well used GT Avalanche. 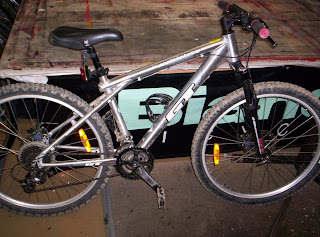 Originally I was hoping to use my old I-Drive frame for him, but after measuring it up decided it would be way too big. So I took most of the parts off the Avalanche to fit them onto this old GT LTS-3 full suspension frame, complete with period RockShox Deluxe rear shock. Thanks heaps to Henry for donating the frame to the cause! 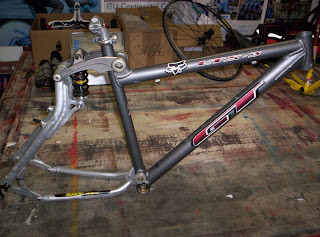 Combining the frame and parts I ended up with this awesome bike which fitted Ket perfectly! 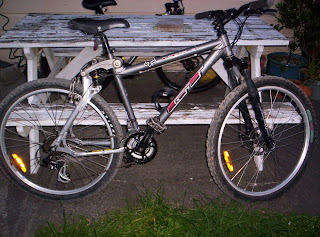 As Harry has also grown half a metre this year I chucked the parts off his 13" Avalanche onto Kester's larger 15" frame to give Harry the right size bike as well. 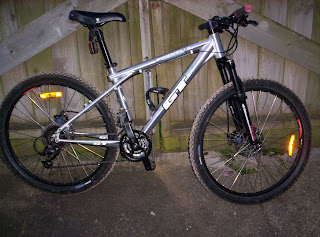 While the boys were at school and I was building the bikes up I texted them to say that we were riding that afternoon, but they had no idea of what I was up to with the frame-swaps. Once they were home we loaded up the wagon and drove up to Makara Peak for a quick blat up Koru and down Lazy Fern, with only one minor mishap as Harry steamed into a ponga nearly ruining his chances of procreating! The boys were stoked with their new rigs, as am I with mine. Which segues nicely into yet another photo of my new Commençal Meta 5.5 in vital Vorb livery. 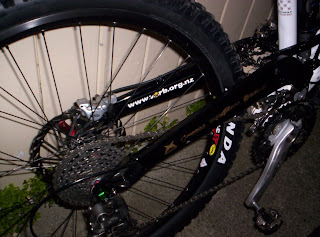 Lastly for now, I got an email from Joel who is the owner of the Surly Pacer I built up last week (capitals mine).

The Surly rides really well! Was really impressed. Very nimble, and no frame flex when putting the power down (the Avanti flexed quite a bit). Nice ride. Seemed to accelerate quite well despite being a 2kg frame. Very different to the Avanti!

Great to hear he's liking the feel of steel - next thing he'll be on Campagnolo! :D

Since I took this picture, Joel has swapped out the old green Michelin Axial Pro front tyre, and he is also bringing it back to me next week for the steerer tube to be chopped 20mm... 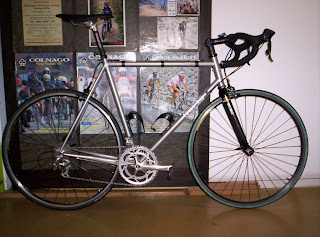 I hope Harry's OK. Wouldn't do any harm for complete recovery to take a decade or so! :D

This is unrealted to the current thread but should be said in a more "public" fashion.

Oli we have talked since Colleen and I moved back to the US and I have thanked you for the great wheelset [MTB/Notubes/29er] you built me. I am here now to continue to toot the horn for your wheel build. I have logged 250+ hours on these lightweight wheels on fairly rough terrain [I'm 83kg] and they continue to perform. I am truely impressed. We have yet to move back to Welly but I've found plenty of job opporotunities - so I'd be working "more" this next time around :>) and I look forward to the day you lace me up a new pair of quality hoops and we share a beer with Jonty and the crew. One of the issues we face is getting these Kiwi cats [originally from Welly] back into NeW Zealand without too much trama. The Cats, "Kiwi" & "N.Z." are not fond of American polotics. Cheers, Cliff Clermont

Hey, Cliffy! Cheers, mate. It was my pleasure, and thanks for the props. I look forward to that beer next time you're back - the cat situation aside...CU, Oli

Is that an after market link on the GT LTS-3 frame to get that rear shock to fit? If so were can a person get one?

Nope, the RockShox Deluxe was standard with the frame - the frame is in original spec.