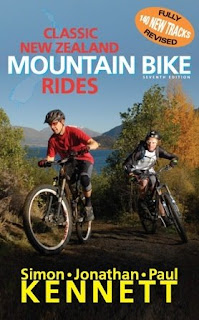 I wasn't able to squeeze this in to my last entry, but I had a great fun time last Thursday evening at the Wellington launch of the 7th edition of the Kennett Brother' superb book series, "Classic New Zealand Mountain Bike Rides".

The seventh edition features 300 rides – including 140 new tracks – along with maps, altitude graphs and a chapter on ride preparation. All 135 photographs are full colour and the maps are now printed in colour, too. Another upgrade in the 7th edition is the addition of track difficulty symbols and a ride rating of between one and four stars. And by popular demand, the book’s flip cartoon has returned, this time featuring the evolution of the mountain biker. The new edition is over 100 pages larger than the 6th.

Ride locations vary from Ninety-Mile Beach in New Zealand’s Far North to the mountainous Percy Pass in Fiordland National Park. The style is laid-back and entertaining and each ride description is accompanied by detailed information on route directions, landowner details and track conditions. The Kennett Brothers aim was to produce a comprehensive guide to every legal mountain bike ride in the country.

First published in 1991, Classic New Zealand Mountain Bike Rides filled a niche in the country’s developing mountain biking scene and since then has sold over 45,000 copies.

Part of the book’s success has stemmed from the Kennett Brothers’ role and the reputation they have built within the New Zealand cycling scene. Jonathan, Simon and Paul began riding in the mid-1980s and are classed by many as pioneers of mountain biking in New Zealand. They have an established publishing record, releasing RIDE- the story of cycling in New Zealand, in 2004 to widespread critical acclaim, and the fourth book in the New Zealand Cycling Legends series in 2008.

The seventh edition of Classic New Zealand Mountain Bike Rides once again provides inspiration for Kiwis of all ages and skill levels to check out the multitude of wonderful bike parks and backcountry tracks New Zealand has to offer.

The invitation said that before the talks, some pizza and a slideshow, we would be heading out to ride "Wellington's newest singletrack". Because I am trying to take any chance to ride I can get, I shut up the shop a wee bit earlier than usual and headed up to Northland's Anglican Church Hall to rendezvous with the other Faithful.

After waiting for everyone to gather, we rolled down Randwick Road, then (surprisingly) up Sydenham Street so we could navigate a tricky hair-pinned path down to Albemarle Road - were the hairpins a portent of things to come?? 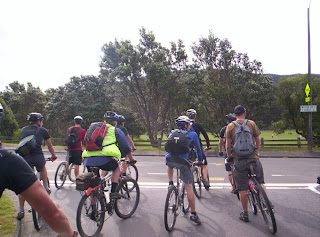 Andrew points out to Jonty that it's actually illegal to ride on a public footpath. 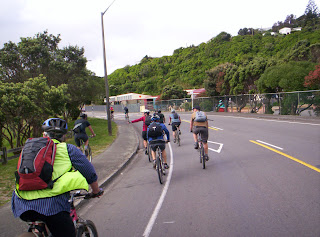 After faffing about trying to cram my camera back in my pocket it became apparent that I'd already been dropped right at the start of the ride! Luckily Matt Farrar kindly escorted me back up to the tail end of the bunch just in time for me to be spat out again climbing up to Bowen Hospital. A bit of a grovel up Chartwell Drive followed, where we arrived in time to see that Andrew had suffered an on-road puncture. 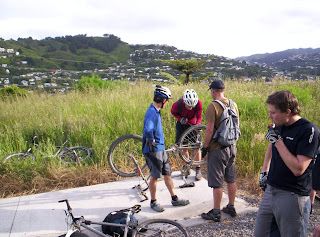 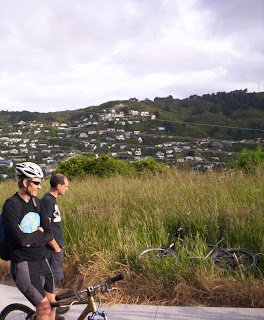 The view back down Chartwell Drive to the Harbour, which was also the escape route I was thinking of using... 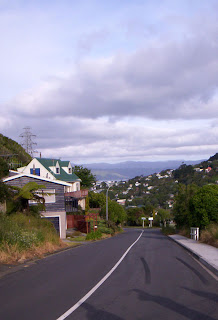 After Andrew had fixed his puncture, and my ego had been partially repaired also, we rolled through a gate and down a gravel road into a valley, where some horses tried to flatten us. Luckily we were able to fight off the savage beasts and proceed on our way. Yet again my desire to frame the moment meant I ended up at the back of the field. No pun intended. 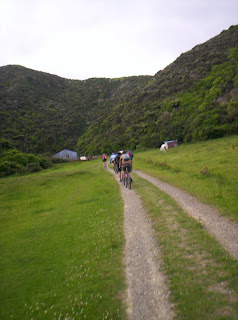 A reasonable climb out of the valley led to another 4WD descent. My excuses for being as far back as I was now are legion - the taking photos, the climb, and added to that the sketchy handling of my tyres (no names, no pack drill!) on the gravel road were conspiring to utterly punterise me. That's my story and I'm sticking to it... 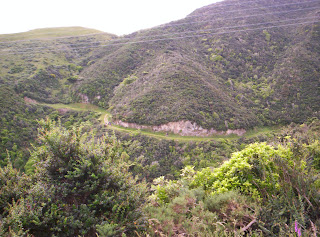 As we hit the third climb I found I was actually climbing okay - obviously I need a 45 minute warm-up including two large climbs to get going! Just as I was about to put in the attack that would have seen off the rest of the laggards for good, poor Patricio managed to shift his derailleur into his spokes, causing a nasty explosion of pulley wheels and a sudden halt to his forward momentum. As continuing an attack when an opponent has suffered a mechanical is very poor form I decided to wait and help.

Alex Revell and Patrick try to figure out what the hell to do next, as none of us was carrying any tools. 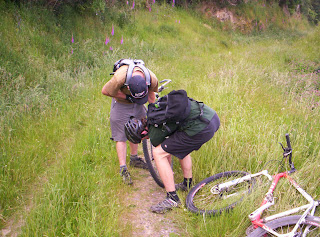 After what must have been a long wait at the top, Simon rode back down to see where we were and to delegate Alex tail-end Charlie. Luckily he was carrying a multi-tool, so it was decided a quick single-speeding was in order. 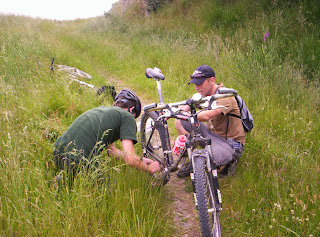 And it was made so. 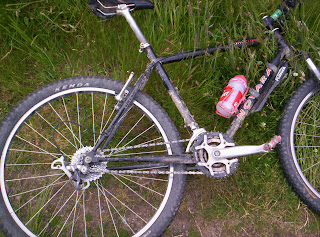 Unfortunately for me, the enforced stop had blown what little form I had only just imagined to pieces. To compound my indignity, Pat seemed to revel in his single gear and he and Alex set a scorching pace to the end of the climb as I struggled manfully to keep pace. At the top of this climb was on the famed Skyline Walkway, which runs between Karori and Mt Kaukau.

As I wheezed my way up the final bit of the ascent to join them, I loved the purple spilling down the ridges that Alex pointed out... 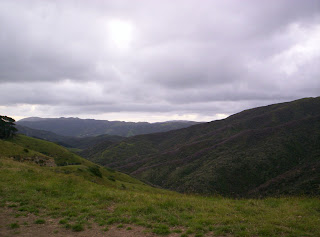 We sidled around the Walkway past the remnants of an old farmhouse on a 4WD track littered with obstacles of a bovine excretory nature, only to come face to face with one of the perpetrators... 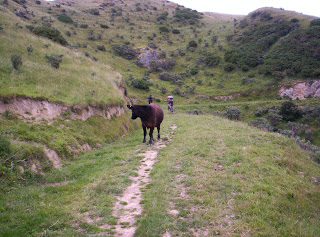 ...and it's demon offspring, seen here narrowly missing me with a vicious charge. Must have been the day for random bestial violence, as usually tame farmyard creatures displayed feral hatred of humankind. 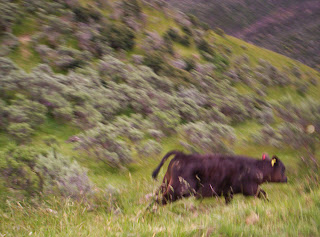 After recovering my wits from one of the most terrifying experiences of my life, I raced away from the scene to catch up to Patrick and Alex, who seemed to be struggling with the whole concept of what being a tail-end Charlie entails. They were waiting at the turn off to Otari-Wilton's Bush and Karori Cemetery, seen in the distance behind Alex and where we were supposed to end up. 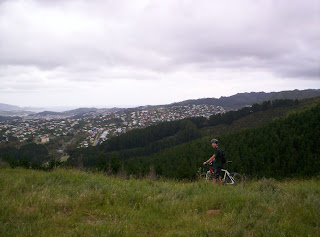 After an odd and totally unexplained display of macho rage from Patrick... 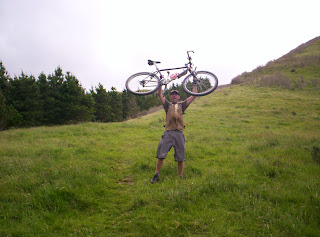 ..we came to yet another gate, and the start of the trail we were here to schralve. 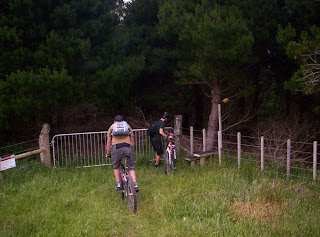 Into the trees we went, where a fresh trail of many differing characteristics was revealed, including some heinous hairpins, bridges, fast open bits, low trees, ponga crossings, and just lots and lots of lovely singletrack goodness.

Here are a few sample shots of what this cool trail is all about, but I heartily recommend riding it yourself as the pics don't begin to do it justice... 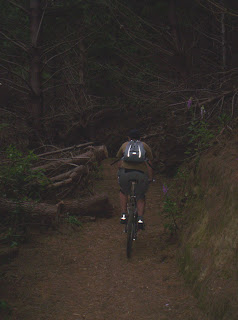 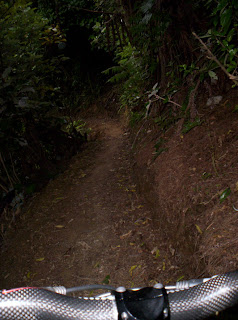 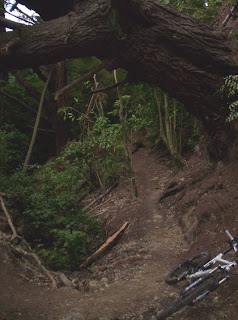 This as yet unnamed trail terminates in Karori Cemetery, where Patrick fully freaked me out by informing me he'd discovered my grave! Eerie! 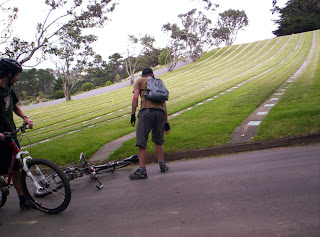 They say the camera adds six pounds to you, and obviously the trauma of my impending death added several more. Here I am wondering if sliding backwards off the edge of the tilting Earth is how I'm going to die. 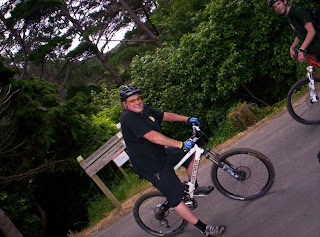 We raced down Chaytor Street - where I was able to show Alex that gravity is occasionally my friend by vaguely keeping up with him - then up the the Church Hall to catch up to the other riders, as well as many other folk who hadn't taken part in the ride but were there to share the Launch.

After some snacks (no pizza though, dammit!) and nice mingling, made all the sweeter by the beer Alex crammed into my grateful hands, we settled in for some cool speeches about the creation of the Classic NZ MTB Rides series of books, some slides from the various volumes, and an awesome short movie taken on the Bridge to Nowhere ride (page 102). 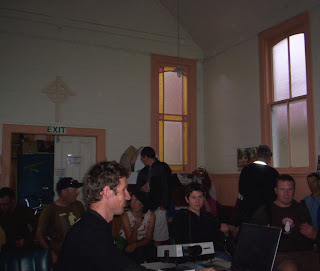 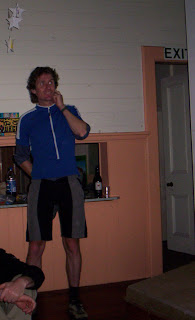 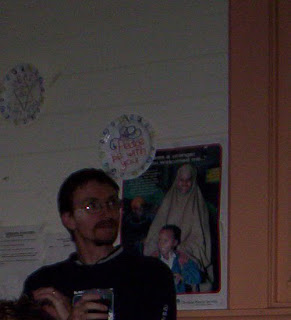 After a great evening I made my weary way home, stopping only to snap this final shot of the Hall. It wasn't until I got home that I realised I had been duped yet again by expert marketer Hamish. I seriously need to get some t-shirts together... 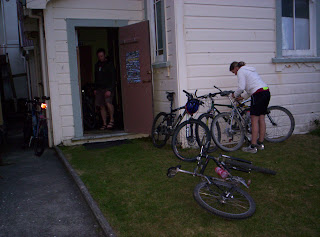 Talking of branded clothing, however, I had an email today informing me that my run of Roadworks jerseys and bibshorts are due to be in the shop over the next couple of days. If you have ordered some already I will be posting/delivering them immediately, and if you want some please email me asap to avoid missing out. 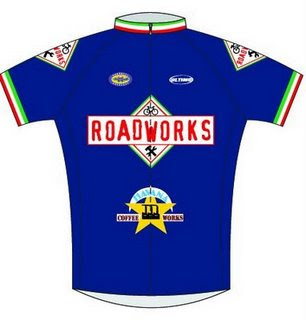