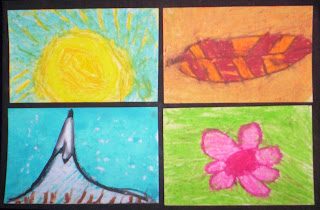 It is indeed the Season, and as Christmas hurtles towards us like a Tour de France sprint finish there's always heaps going on. I definitely notice the good weather has been helping everyone get out and ride, which always means a more cheerful time for all...

Last reminder for the Makara Peak Rally this Sunday - please bowl up and check it out, even if it's just to have a sausage and watch the fun. I gave REO Ben a box of goodies to add to the always impressive prize pool, and he tells me he's giving me a scenic place to marshall so I can blog some action - I'm really looking forward to this great fun local event.

Next up is some exciting news - at least for a few of us. I have just made up a small order of Roadworks jerseys and shorts, as I haven't had any new kit to offer since 2003. It's taken me too long, but I have been wanting to get onto it for the sake of a few key personnel, not least the latest official Roadworks Team member, Mr Joel Healy. Look for Joel and the always estimable John Randal to smash some road fields in the not too distant future in a fearsome combine! 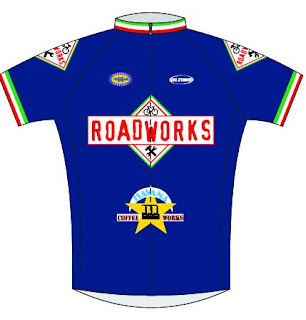 Thanks very much to local Petone company Ultimo for organising my order so swiftly - it should be here by Christmas. I really appreciate the effort and, as you can see, the (only slightly) revised kit looks wicked! 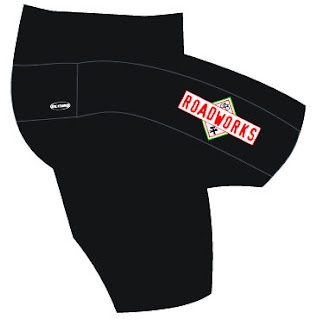 As I say, I don't have much kit to offer but there will be some spare items. If you're keen please email me and I'll let you know what's left after the Team get their hands on some well-deserved fresh kit - if demand is there I can always do another run in the New Year.

Speaking of my Team that I am so very proud of, I wrote a few posts ago about Roadworks Legend and great guy Dave Hicks who was doing the XPD adventure Epic in NSW. Unfortunately things didn't go so great for him or his team, but I'll let Dave tell the story:

Our Team had great pace however things didn't go that well for us. Liam had to withdraw with an injured knee just over 24 hours into the race. The race itself was a tough one, with bad weather on top making it pretty brutal - suited us Kiwi's though! The first bike leg was a taste of things to come with 800 vertical metres of bike-push climbing, great descents though! Next up was a scheduled 85km trek with around 5000 meters ascending and descending, though this turned into nearly 100 kms and it rained almost constantly.

Next up was a welcome sit-down with a paddle section (where I holed a boat running over a railway sleeper) before a mammoth 210 km MTB leg with 4500 metres climbing (yep, lots more hike-a-bike) with weather deteriorating from rain to hail/sleet then finally snow. At this point the race director shut-down the course, though as we were near the section end we decided not to wait for pick-up but to ride out (another 50 KM).

The restart a day or so later saw all teams released at 30 second intervals for a MTB "Team Time Trial" - quite a hoot. The next stage was a navigation exercise at night through bush and snow to locate 6 hidden checkpoints. Our navigator Danielle was amazing, hitting each target spot-on however it was part way through this that I started feeling a little strange ...

To cut a long story short I was felled by a mystery gastric bug, going from feeling a million dollars to flat on my back within the space of a couple of hours. I eventually made it back to the transition area fevered, hallucinating, and with uncontrollable spasms/shivering. I changed into my cycle gear but was bundled into a tent and covered in sleeping bags. In the 2 days it took to get from the back of beyond into medical care I'd lost a lot of fluids so had to go on a drip for a while.

Poor Dave is still recovering from whatever laid him so low, so I wish him all the very best in getting back to smashing form very soon...

Meanwhile in the shop I got to build yet another Roadworks hardout's wheel. Paul is whacking this lovely wheel on his Commençal to take full advantage of those superb Rotorua trails. It's a Hadley hub built into a Stans Arch rim using DT stainless spokes. Hot. 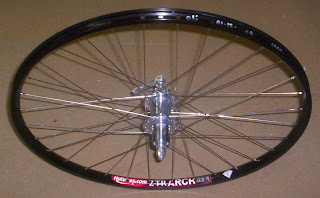 Here's a sign that Paul souvenir-ed for me on a trip to Belgium in 2004. This was the year Italy's Davide Rebellin won the Liege-Bastogne-Liege Classic, but the fuss over Tintin's victory in this Monument was nothing compared to the excitement when the Gendarmes spotted Paul liberating the poor tethered thing from it's prison high on a street pole...

I can't remember the story about this sign, but I think it involved being chased through Milan by the entire Mapei Team. Paul is a good man to put himself so constantly in harm's way for the sake of his sponsor. 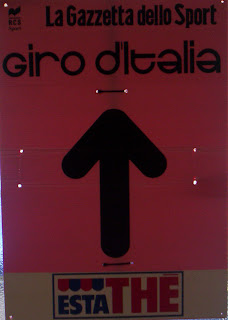 I finished off Malcolm's lovely Raleigh - of course it had to have white handlebar tape, but finding a nice white saddle is proving more difficult! This has my old plastic saddle on for now for test ride purposes. 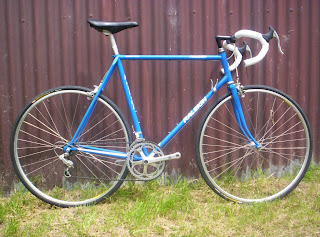 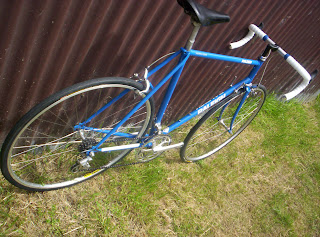 The shop layout was irritating me so one evening I set to it - now the bikes are all on one side, and the couch faces me when I'm at my stand. It's instantly more accommodating and useful. 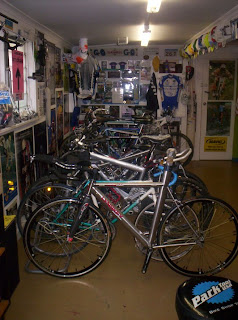 I worked on this diamond in the rough Eclipse touring bike. I loved the lugs and brazing, which were very tidy. I also love the ethos behind the sturdy engineering that goes into a bike like this, how much punishment they are built to absorb, and most of all how simple they are to fix when things do go wrong/wear out. Basically, all I had to do was regrease the hubs, headset and b/b, lube the cables and replace the brake pads, and it was working as good as new again. Impressive stuff under the workmanlike layer of accumulated road grime. Jane tells me she chose this lovely bike for herself in May 1985. Cool to see it still going strong with almost entirely original parts... 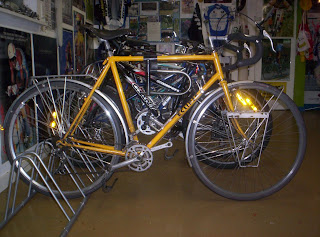 Also of a tourismic bent, I built these wheels for Nick's cyclo-cross bike for loaded touring. Salsa Delgado Cross rims on Tiagra hubs laced classic 3 cross with Sapim Race spokes on the front wheel and DT Comp on the rear. Good solid wheels that will still have a zingy responsive feel when the panniers come off. 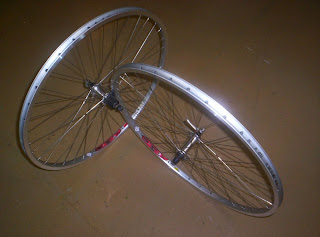 Than came this unusual bike. I think it must have been designed for kids or tiny women, and it is a mint-condition reasonably specced (check out the 1986 Bernard Hinault LOOK pedals!) mini-racing bike. It is most unusual in having a standard 700c size rear wheel but a small 24" front wheel, to shorten up the whole front end. It's current owner asked me to scale it up a bit so I put a (much!) longer seatpost on, as well as installing a height-adjustable stem I had lurking about. A bit of a Frankenbike but something about it's oddness appeals to me - it rode okay on the tri-bars too! 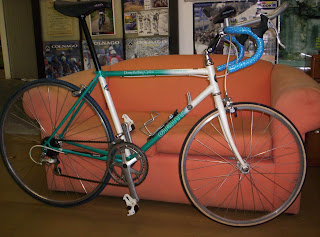 I built this lovely pair of wheels for two separate bikes - the front is going on a wicked custom Ti singlespeed, and the rear on his trail bike. Built using DT Revolution spokes (drive-side Comp) and aluminium nipples both wheels are seriously light. They practically fell together which is always a good sign for the life of a wheelset. 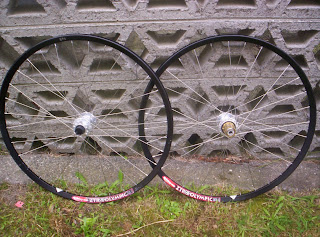 Always nice to top off a week with a project from Dave of Bike Fixation. This Litespeed Saber (Sabre, dammit...) is fast even when it's not moving. A few trick bits are always a feature of Dave's thoughtful speccing. 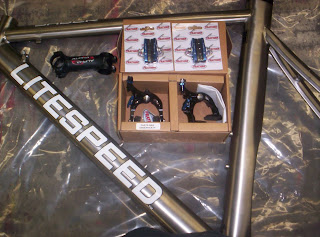 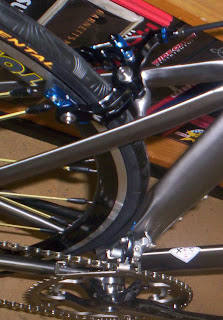 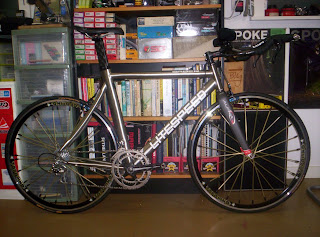 Well that's enough for Friday night - my next post will be from the Rally. Cheers for reading, Oli
Posted by Oli at 10:17 PM