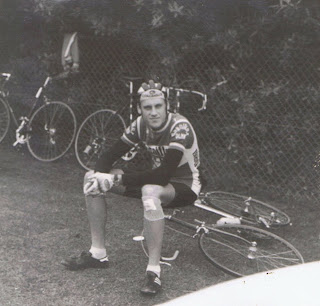 I can't believe I forgot some of my other great cycling favourites! It just goes to show that when you blog until 3.45am some important things can slip below the radar...

Maurizio Fondriest was another guy who just looked like he was at total home on a bike, no matter the conditions or the torrid speed of the race he was in. Surprise World Champion in Ronse, Belgium in 1988 at the expense of the unfortunate Steve Bauer and Claude Criquelion, he went on to become a perennial Classics winner and contender through until the mid-90s. 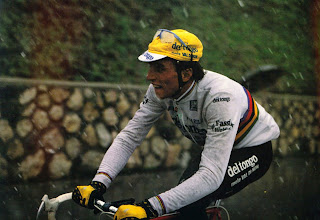 Ireland produced two of the best cyclists of the 80s in the great Sean Kelly and Stephen Roche. "King" Kelly was one of the best Classics riders ever, winning four of five of the Monuments. He wasn't just a one day man though; he won Paris-Nice seven times, two Tours de Suisse, and he even won the 1988 Vuelta a España. Only the Ronde van Vlaanderen and a World Championship were missing from his palmares, although his 4th place and other top ten finishes in le Tour might have made him look like a contender for that title too...his consolation there was winning the Maillot Vert a record (for the time) four times. 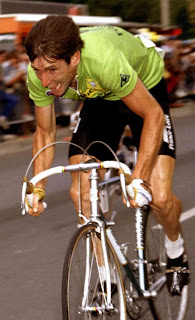 Stephen Roche was like Anquetil before him and Fondriest after - a man whose fluid pedalling made the hardest efforts look easy. Thanks to being somewhat injury-prone his results weren't as extensive as his compatriot, but he topped Kelly and almost every other pro cyclist in history by winning the fabled Triple Crown, the Tours of Italy and France and the World Championships, all in the same year. The only other rider to accomplish this amazing feat? Eddy Merckx, of course... 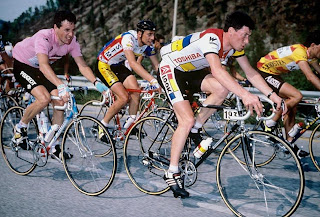 I owned a beautiful Eddie Bosomworth painted in the Roche Carrera colourway for some time - I hope Stefan is still enjoying the sublime ride of yet another bike I deeply regret parting with! 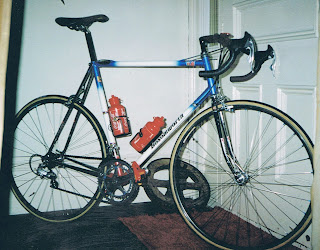 I can't believe I left this next rider out of my initial selection. I don't know whether it was his start-to-finish 1990 Giro win, his consecutive Alpe d'Huez victories and podium places in the Tour behind Indurain in '91 and '92, his back to back Worlds wins in the same years and his several Classics wins, or if it was his slightly edgy nervous style I enjoyed the most, but Italian superstar Gianni Bugno was one of my great favourites throughout the 90s. At one stage of his career his nerves were so bad he was dragging his brakes on every downhill, costing him some major wins. He underwent therapy to conquer his fears, which involved listening to classical music on a Walkman as he descended in training! 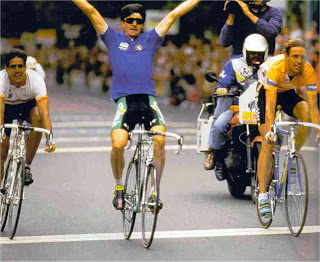 There were others I should have mentioned also... 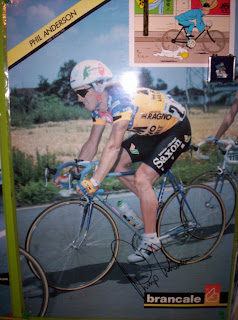 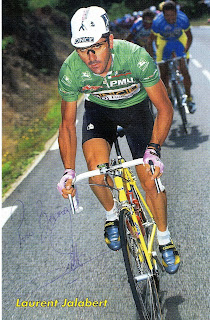 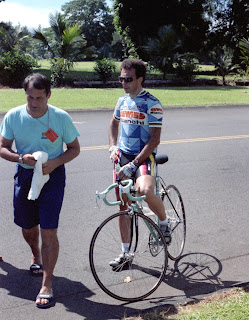 I think that's probably enough history revision for now; perhaps next time I pen-pedal these written roads it could be to talk about some of the great women of cycle sport... 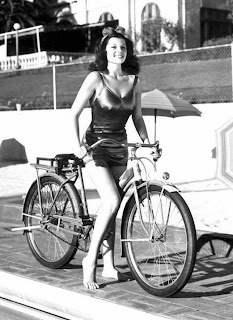 Back soon with some more current fare. Until then, thanks again for reading. Cheers, Oli. 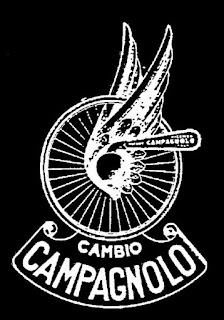