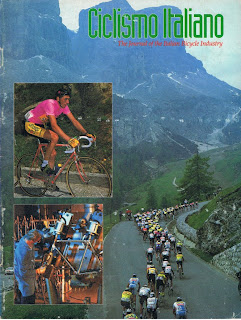 In the early 1990s the magazine VeloNews used to give away an annual pull-out guide to the bicycle section of the famous EICMA trade show, held every year in Milan. They were filled with some cool insider articles on various Italian frame, component and apparel manufacturers, as well as many fine photos. Here's a selection of my favourite pictures from the few tatty issues I still possess here in my Fortress of Solitude. Please note that some have been blown up from very small images, so not all are as clear as I'd like - as always, click on the picture if you want to see it embiggened.

The Italian Cycling Pantheon, plus a beautiful (if small) shot of Campagnolo's classic 1940 Cambio Corsa derailleur. 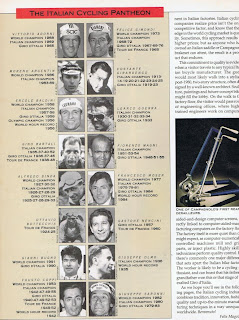 Hellooo! It's Eddy Merckx, of course! The Cannibal is wearing the Maglia Rosa during one of his five victories in the Giro d'Italia. Note the awesome drillium. 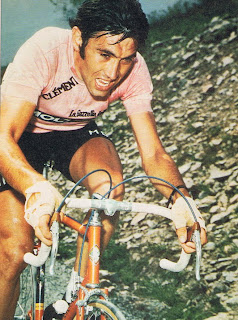 The Angel of Luxembourg, Charly Gaul. He decisively won the 1956 Giro d'Italia thanks to a courageous climb through a snowstorm up the feared Monte Bodone. Gaul went on to win the 1958 Tour de France and the Giro again in '59, all on the strength of his prodigious climbing abilities. 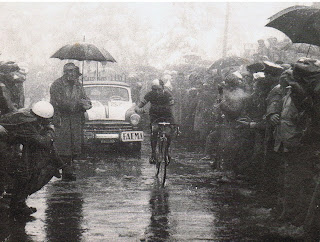 French superstar Jacques Anquetil used his time trial prowess to overcome a large Italian combine in winning his second Giro d'Italia in 1964. Anquetil was the first rider to win all three Grand Tours through his victories in the Giro, the Vuelta a España, and of course his five wins (at the time unprecedented) in the Tour de France. 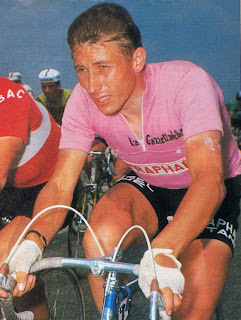 Italy's highest mountain pass, The Stelvio, was the scene of the great Frenchman Bernard Hinault's race-winning attack in the 1980 Giro. Among a legion of other classy wins Hinault also went on to win five Tours, as well as three Giros and two Vueltas. This makes him the only rider in history to win more than one of all the Grand Tours. 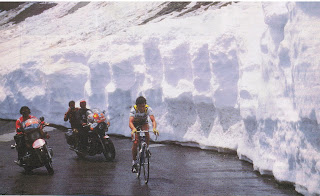 Many Casati frames lined up in the Casati factory... 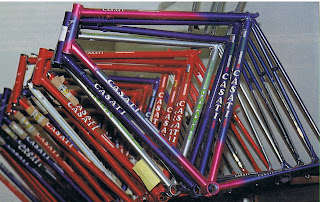 Oh wait, I have one of those already - woohoo! 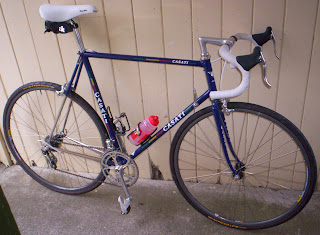 And to get back to the booklet, here's a Casati funny bike. 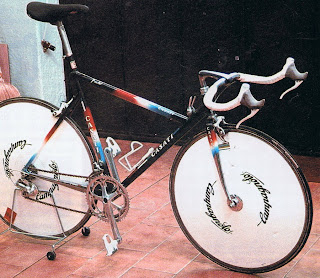 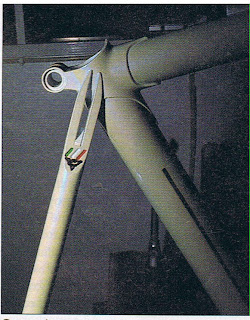 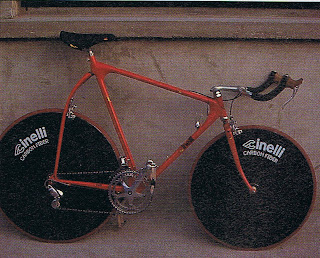 A detail of the wheelbase adjustable rear dropout of a Gios Compact. 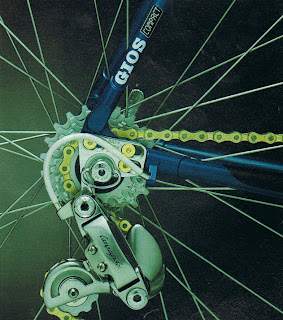 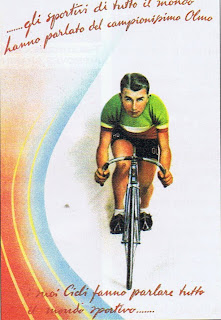 Some pretty Olmos all in a row. 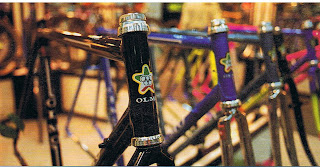 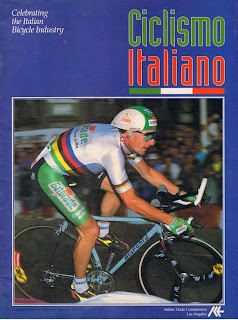 The Giro peloton passes before the mighty Dolomites in the 1992 Giro, with Cipo centre-shot on the Bianchi and wearing the Ciclamino. Also in shot on the left is the legendary Sean Yates in the Motorola jersey. 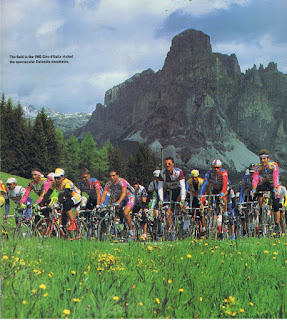 The Statue to Cyclist at the famed Madonna del Ghisallo chapel in Lombardy. The peloton passes the triumphant and despairing cyclists every autumn during the great Race Of The Falling Leaves, otherwise known as the Giro di Lombardia one-day classic. 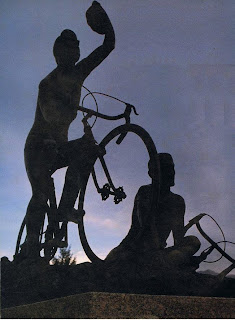 The majestic Miguel Indurain in the pink of race leader shadows feisty mountains leader Claudio Chiappucci during the 1992 Giro d'Italia. Indurain was in the middle of his dominant run of five consecutive Tour de France wins ('91-'95) when he won this Giro and the following one in 1993. 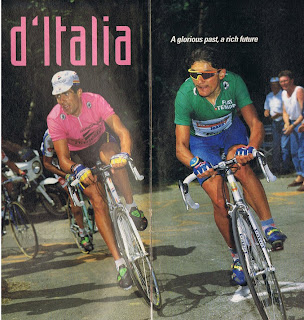 Winner of the 1991 Giro Franco Chioccioli failed to repeat in 1992, wilting under El Rey's serene but penetrating gaze. But at least he had a Bianchi to console him... 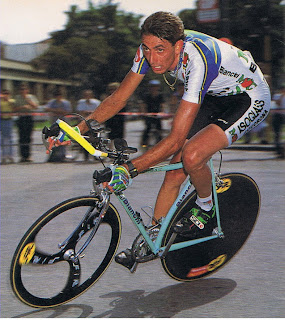 Did I say Bianchi? Here is my man Gianni Bugno winning his second consecutive World Championships on one in the 1992 race held in Benidorm, Spain, beating Laurent Jalabert into 2nd place and Miguel Indurain into 3rd. 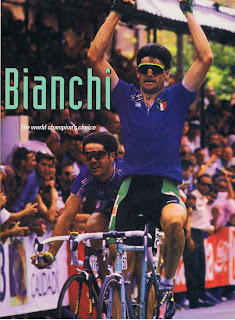 A technician works on a Bianchi frame in the famed Reparto Corse. 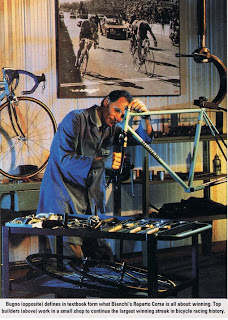 A lovely Colnago Master Olympic in the Ariostea colour scheme. 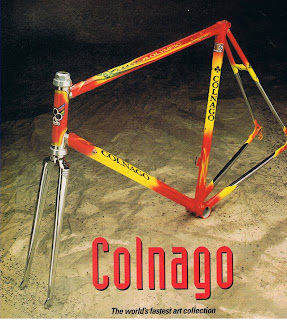 In the early 90s I wanted one of these so bad I even resorted to buying a pair of my friend Doug's scody used Ariostea shorts to go with the jersey my girlfriend had picked up for me in Sydney in advance of the frame I never ended up owning...predictably the "barely used" shorts lasted about two rides before people were reporting me for exposing myself. 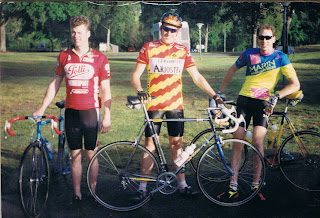 The so-called "art collection" of concept bikes on display here demonstrates the energy of the famed Ernesto Colnago. 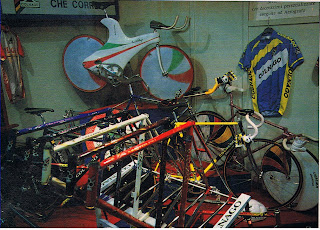 Italian great Francesco Moser began building bikes in his name while still riding. These are team bikes from the 1992 season. 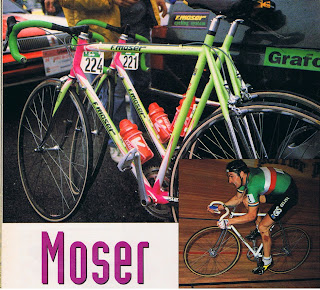 Il Campionissimo Fausto Coppi ducks under a level crossing in some mad race or other! 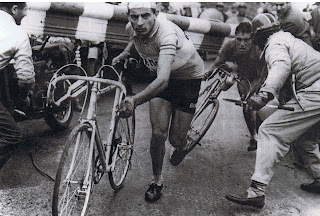 From the 2003 Ciclismo Italiano comes this shot of the first and only German Tour de France winner (1997) Jan Ullrich, who raced most of the '03 season in the iconic celeste colour of the Bianchi team. 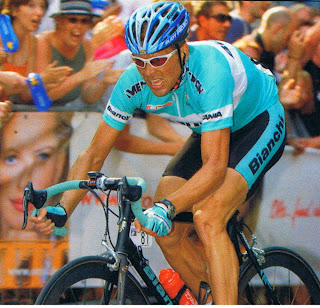 And finally, here's another shot of Francesco Moser just because...this is immediately post his historic 1984 Hour Record ride of 51.151km that he set in Mexico City, dethroning (until the rules were changed!)) Eddy Merckx himself. 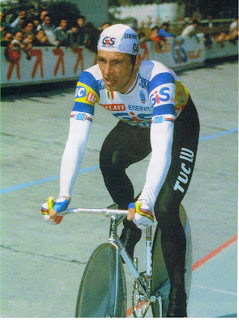 Hope you enjoyed. Cheers, Oli
Posted by Oli at 7:19 PM

i want to be embiggened - should i click on myself?

I seem to have the opposite problem...