I built this lovely TT bike up on Tuesday for a local road racer wanting to dip his toes in the water of Time Trialling without making a huge financial investment initially. He has used an Avanti Kona frame and some forks off a Specialized Transition with a mix of assorted parts to create a cool rig for working out whether or not he will want to invest in a dedicated TT frameset...my feeling is that this will do him fine.

I love the Sram gear and brake levers, although running the cables through the Easton carbon aero bars was a tad frustrating! The Mike Burrows designed Giant wheels and aero seatpost are very cool, as is the Sram Force rear derailleur, although I'm not sure my lard arse could handle the Token carbon saddle for more than a few minutes... :-D 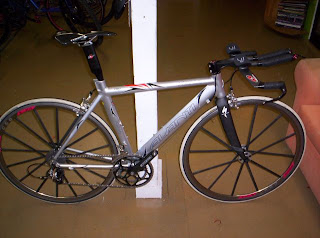 I had a most fun evening tonight (Wednesday) - I finally made it to a Makara Peak track building work-party, 3 years after my last one... :blush: I chucked my GT I-Drive in the back of the new Roadworks Corporate Nissan Prairie (see below!) and drove up to Karori. I was just about to head up the soon to be opened Lazy Fern track when my wise friend Grant told me I should ride up Koru and down Lazy Fern. Great idea! So I got to experience this delightful bit of new singletrack in it's intermediate state, before it's eventual clean-up into a true beginners downhill. After a cool ride I found the work-party and was showed by the trailbuilding experts how to wield a pick for an hour or so. Hugely rewarding to see the track taking shape before my eyes, although the Makara Peak rock took some damn pickin', I tell ya!

After the work we adjourned to Makara Peak Supporters stalwart and loyal Roadworks Team rider John Randal's nearby abode for pizza, beer and banter - great fun!

Makara Peak is a fantastic resource for the Wellington and New Zealand mountainbike community, as well as the many overseas visitors who hear tell of it and hire a bike to schralve it bigtime. The many folk behind the scenes of this inspired playground for MTBers deserve our fervent thanks. Good ways to do that are by taking up a membership of the Makara Peak Supporters, helping on a work-party (even if only for a few minutes), by riding in one of the events held up there such as the Makara Peak Rally coming up in early December, or by simply dropping a coin in the donations box at the carpark when you go for a ride. Your help will definitely be appreciated, and will also pay off for anyone who rides on these glorious tracks. I have a family membership and will be one of the Makara Peak Rally race sponsors, so I look forward to seeing you up there! 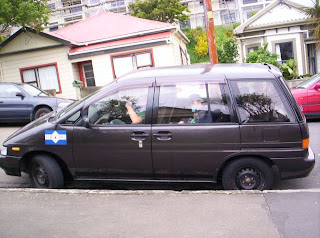