So it was a slightly battered but still unbowed Jazz Apples Cycling Team that ambled down to breakfast on the day of Stage 3 of the Chongming Tour. We were determined to take the race to the Chinese, and to everyone else for that matter - we had nothing at all to lose. The girls plotted fiendishly all through breakfast, and no doubt throughout their morning briefing in Lauren's room. Great to see that the misfortunes of the previous day hadn't dented morale.

I cast my eye over the bikes again and checked the tyres, before lugging all my gear down to meet Mr Ding. Once the rest of the Team appeared we rolled out of the hotel to the start of today's Chongdong Road Race, a 100km run up and down an utterly dead-straight motorway with a small square circuit at the far end, then back along the utterly dead-straight motorway... 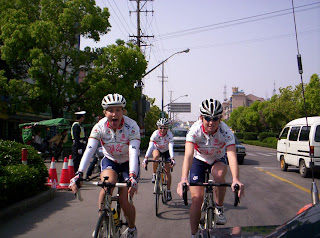 Due to our bad luck on yesterday's stage we were sadly in last place on the team Classification, so Chris and I were stuck at the very tail of the convoy in car 14 - I was wishing I had brought a telescope to see the action!

Malindi was determined to avoid being pushed around in the peloton any more so asked Wo Mei what is the Chinese for "Get out of the way!", then wrote it on her arm in case she forgot - of course she didn't, and she got to use the phrase a LOT. 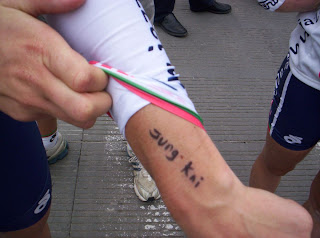 After yesterday's difficulties in making Mr Ding understand the unique requirements of driving in a race convoy, Chris was adamant that he would drive today. Mr Ding looked slighty disappointed, but settled into the back seat for a nap.

We set off at 9.30am and began an interminable day of endless highway stretching like a ribbon into the distance, broken up only by villages and/or intersections full to the brim with spectators, as well as the local performance troupes.

Chenhai Road went on and on and on. That's the bunch in the far distance... 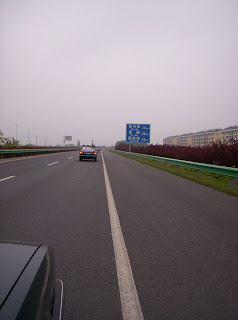 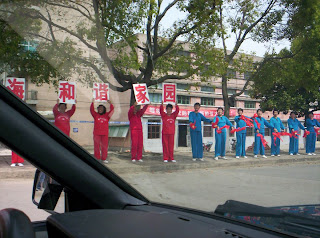 Of course, despite the wide (and did I mention dead straight?) roads, there was a crash or two. Chris and I didn't even know it until after the stage was done, but Malindi and Lauren had gone down again - luckily without mechanical problems. The Chinese had a rider go down whose bike required a change after a futile attempt to chase. She faced a long and lonely day on the road to nowhere... 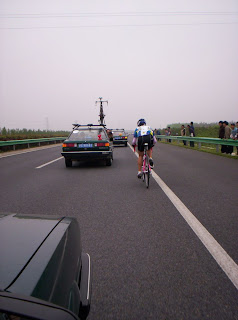 Chris and I felt tense in the car - we had no radio to hear what was going on with the girls, no really useful feedback from Radio Tour, and the constant nagging fear that one or more of the girls would be taken down again - a feeling that was only slightly alleviated by Leoh and Wo Mei's beautiful Good Luck bracelets!

While we sat there sweating, the girls were following the Team Plan to the letter; after the second sprint at 60km they went on the attack - hard. Lauren fired scud after scud at the peloton, which helped Ruth establish the first true and viable break of the entire Tour, before the Screaming Chinese Machine buried themselves to reel the escapers in.

Malindi, still recovering from the illness that took her out of the Tour of Wellington, worked super-hard while she still could to launch both Lauren and Ruth on several more attacks. These raids also gave Susy the chance to use her impressive strength to launch some fierce counterattacks, until nearing the end of the stage the Chinese teams were in tatters and on the ropes.

The demolition of her teammates meant that the Chinese Tour Leader (Li Meifang - Giant Pro) was forced to chase hard virtually alone, so the Jazz kept the pressure on with assistance from the Poles, Ukrainians and especially the South Africans. 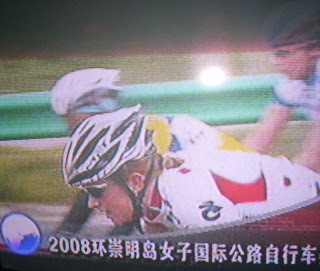 In the final kilometre, Lauren took another superb flyer down the outside of the bunch, but she was chased down just before Susy led Ruth into the last 90 degree corner. Ruth made a huge effort in the sprint to finish a valiant third, behind the Thai stage winner Thatsani Wichana and South Africa's Sprint Leader, Cherise Taylor! 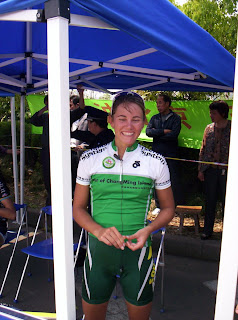 In her short but stellar cycling career, Ruth has been generally marked down as a climber - no surprise when you look at her fine 2nd up Admiral's Hill in the Welli Tour - but her finishing effort into Masterton to finish up 5th against some of the world's the best sprinters meant that we weren't surprised at all at her finishing prowess!

Naturally the whole Team was thoroughly delighted, and we were all elated to have turned things around so dramatically after the awful events of the day before...we might still be last on Team GC but there was no doubt now that the entire race knew the Jazz Apples were here! 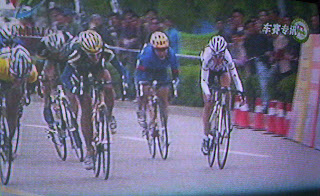 After the stage finish we were expecting a podium appearance for Ruth, so we helped her clean up and rehydrate, then arranged for Andrew from Kraft-Genie to take some proper photos for cyclingnews.com, only to be told that only the winner was being presented!? After every other stage the first three places had gone up on the podium to accept the acclaim of the assembled crowds and media, so we wondered if it would be churlish to think it might be due to the absence of Chinese riders in the top three..oh, well.

Ruth ready for the podium 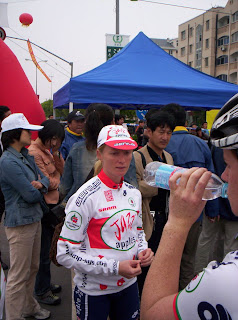 We then made our way back to the hotel for lunch (no more rice, please!), and so I could look over the bikes. As I said, after the stage we found out that Lauren and Malindi had both had minor prangs. This meant more beer-fuelled removing and regluing of tubulars to true buckled wheels, straightening bent dropouts, and general fettling. I was rapt to see that Susy's wheel was still perfect after my repairs the previous afternoon - in fact her whole bike had run like clockwork.

After work was done for the day, Chris and I went over the road from the hotel to buy a few bits and pieces. We had a hilarious mission to the PC Mall, which involved about 30 giggling shop assistants to find two AA batteries for my thrashed camera, Chris considering buying a cheap phone only to discover that the Chinese text was a permanent feature, and a toddler being forced by his mum to shake my hand - the poor thing looked terrified! We left PC Mall past a long line of pedi-cabs to a chorus of cheery "Hello!"s and some gentle mocking of my slightly portly figure from one cheeky chap - no Yuan for you, matey! Then onto Eye Shop for some ridiculous haggling between Chris and the shop assistant over some sunnies, which left us quite certain that we had been royally shafted even with the eventual discount. At least Chris was looking sharp in his new fly shades!

We checked out a few more shops but after a while it becomes quite wearing to walk around being ogled like an alien, so we both decided to head for the safety of the Tian He...

Bikes are an integral part of Chinese society 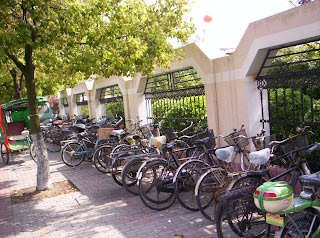 After a spirited and humorous dinner together we all headed for our respective rooms to prepare for the final day's stage, and also I sorted out as much of my stuff as I could to make life easier on our final day.

Last night in my room 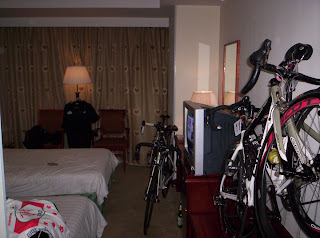 I polished off the last of the beers that Jen Magur had bought me and watched the Chongming TV coverage of the Tour, before trying to decipher the Chinese commentary that ran through their version of the Disney classic, Fantasia, then hitting the sack...

I don't have a drinking problem, honest! 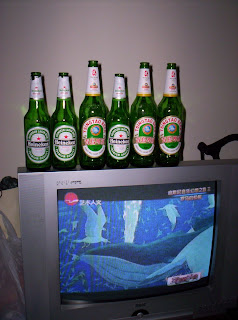 Only one more stage to go! Thanks for all the wicked feedback you've been giving me so far...Best regards, Oli
Posted by Oli at 8:12 PM